Why is the direction of pressure always perpendicular to surface area for fluids?

Why is the direction of pressure always perpendicular to surface area of a body for fluids ? We also assume that it is an ideal fluid here.

So , pressure acts in all directions because fluid has a tendency to flow.

Now , in book it says that for a block in water. Pressure must only act perpendicular to the surface area of block because otherwise , there is no friction between adjacent layers of the fluid. Also ,pressure must act in perpendicular direction on the sides on the tub if a block is put inside a tub which has water contained in it.

Also , in real life. This law must not be valid right since it only for making calculations easy? Is that true so.

This is actually something not easily answered because it is part of the definition of pressure. I will instead point you to other answers which hopefully make sense.

The following is an excerpt from Lumen Physics.

*The force exerted on the end of the tank is perpendicular to its inside surface. This direction is because the force is exerted by a static or stationary fluid. We have already seen that fluids cannot withstand shearing (sideways) forces; they cannot exert shearing forces, either. Fluid pressure has no direction, being a scalar quantity. The forces due to pressure have well-defined directions: they are always exerted perpendicular to any surface. (See the tire in Figure , for example.) 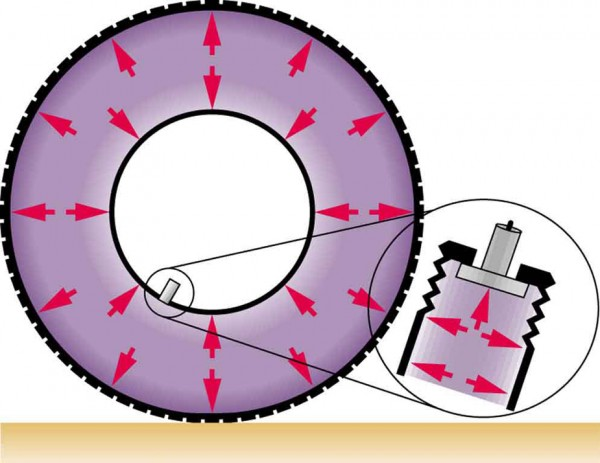 Finally, note that pressure is exerted on all surfaces. Swimmers, as well as the tire, feel pressure on all sides. (See Figure 3.)

Basically, a key part of the above is saying that pressure is always perpendicular it is because if there were a component of force parallel to the surface, then the object will also exert force on the fluid parallel to it as a consequence of Newton's third law.

Additionally, there is a similar question to physics stackexchange.

Not the answer you're looking for? Browse other questions tagged fluid-mechanics fluid or ask your own question.

8
Estimating Darcy Friction Factors for Critical Flow
5
Why does flow seperation cause low pressure zone?
2
Measurement of static pressure
1
When a valve under pressure is closed and creates a seperate cavity. What happens to the pressure in the seperate cavity?Will it leak out over time?
3
Free falling fluid pressure distribution
4
Eulerian description of fluid flow
2
Calculating mass flow rate of a scramjet engine?
0
Do throttling devices need valves?
1
Is a no-moving-parts air pressure transformer possible?
0
Resultant hydrostatic force on a gate for a fluid that doesn’t reach its center of gravity