Why doesn't prestressed concrete crack at the top before the load is applied? 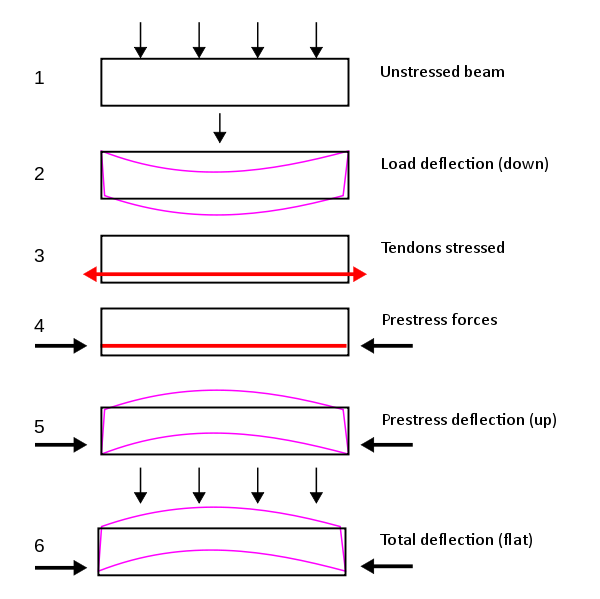 In prestressed concrete, we add a tensioned steel cable at the bottom half of the beam to balance out the tensile forces resulting from the applied load. But before the load is added, doesn't the beam deflect upwards and cause tensile cracks now at the top of the beam (situation 5 in the above picture)? Let's say we tension the cable and cast the concrete and then release the cables into compressive stress. I don't see how in practice we can immediately apply the designed load to balance the situation before the beam bows upwards and cracks at the top.

Note that the pretension $P$, besides causing a bending moment $(M=P\cdot e$, where $e$ is the eccentricity) to counteract the expected loads, also inflicts a normal (compressive) force ($N=-P$).

Usually, a stress analysis needs to be made for the different loading setups to confirm that tensile stresses either do not occur or exceed a certain value. This can be achieved by applying the following equation: $$\sigma_x=\frac{N_x}{A}+\frac{M_y}{I_y}z$$ The equation uses the right-hand-rule, where the $x$-Axis points from left ro right, $y$ into the plain and $z$ upwards. Furthermore, tensile forces/stresses are positive.

Because there are rebars designed for this exact task on the top layer of the beam rebars.

These are in addition to other rebars required for other loads, such as negative moment rebars at the supports. the codes allow certain bars to share loads.

For starters, what makes you think the concrete doesn't crack at the top?

Let's assume for a second that it does crack. Well, if we were dealing with a pure concrete beam, that'd be a big problem since the crack would propagate down the height of the beam until it falls apart.

Thankfully, prestressed concrete beams aren't just concrete and a prestressing cable. They are also given some light longitudinal rebar (usually just the minimum required by the relevant code on each face). So if the beam starts to crack, it'll activate the rebar which will impede the beam's collapse.

And is this a big deal? Well, no, not really. After all, the beam will soon be under the expected load, at which point the downwards forces will counteract the camber, the top face will go under compression and those cracks will all seal up. No harm, no foul.

So, even if the concrete were to crack a bit on the top, it's honestly not the end of the world (assuming all safety requirements are met, of course).

But does the concrete crack?

Well, not necessarily. And I'd say it usually doesn't.

Not the answer you're looking for? Browse other questions tagged structural-engineering prestressed-concrete or ask your own question.

7
(Non)simultaneous prestressing anchorage slip losses
7
Why are concrete bridges more prevalent than steel bridges in the United States?
4
Why would a column expand before accepting load through a narrow thunk?
7
Should I model the load from a pool at the top floor of a multi-story building as live or dead?
14
Why does column buckling occur when the load is parallel to the column?
4
Why is the stress distribution on concrete approximated like this?
2
How to calculate the required prestressed jacking pressure to apply to a pre-tension concrete beam?