In the general case of the plane motion of a rigid body, the resultant does not pass through the G of the body. Why is that?

My book, Vector Mechanics for Engineers: Statics and Dynamics 12th Edition, states in the plain motion of a rigid body, the motion of the rigid body is completely defined by the resultant force and resultant moment about G acting on the body. But it also states

We also note, as we did earlier, that the system of the external forces does not, in general, reduce to a single vector m¯ a attached at G. Therefore, in the general case of the plane motion of a rigid body, the resultant of the external forces acting on the body does not pass through the mass center of the body.

Is it because the resultant moment is not zero at G in general, and if the resultant force doesn't pass through G, we can replace it with the same vector attached at G and the couple ? Is that right?

Yes, in general, the sum of external forces applied to a rigid body, do not necessarily pass through the center of the mass, but a distance away from it, causing

It is only in particles that this sum of forces always passes through the CG, of the particle, obviously.

Take for example the following case 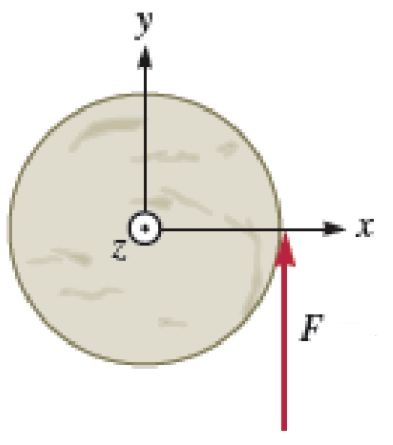 The only force applied on this disk is force F. Therefore the net (or resultant or the vector sum of forces) is equal to that force F.

Force F does NOT pass through the center of gravity of this disk.

Yes that's right. If you look at it the other way - if the resultant force always passes through G, then you will never be able to describe a situation of rotational non-equilibrium because your moment arm will always be zero.

The general case must be that the resultant force does not pass through G, allowing you to define net translational forces and rotational moments.

5
Logic behind location of shear centre
3
Why is there a moment at the cross section end when you cut a body?
3
Distributed load with an offset?
3
Replacing a straight rigid link by a curved rigid link
3
Equation of motion for 2-link arm
1
How do I represent equations of motion of a dynamic system in State Space?
2
Mathematical connection between systems of particles and rigid bodies
1
Can a simple application of two forces have two different outcomes on a rigid body?
8
Moment equation from dynamics differs with equations from physics & statics. Where did I go wrong?