A drum is subjected to a counterclockwise torque of 16 in-lb. What horizontal force is necessary to resist motion? 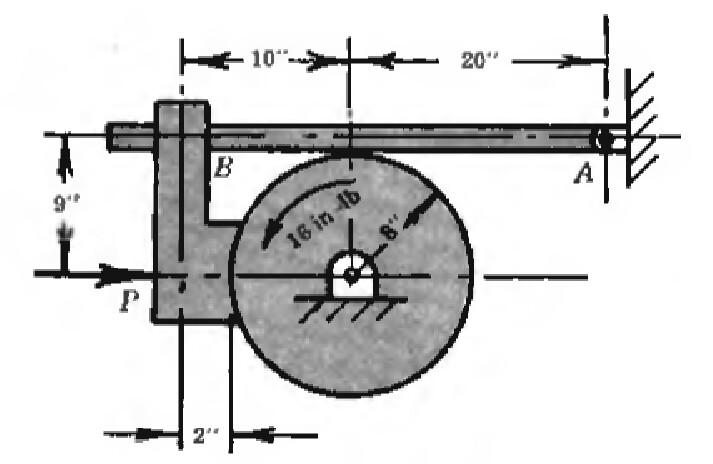 I'm having a hard time on this one. I've tried to separate the torque into a normal and tangential force and do a summation of moments at B and even at A. No luck. Though I doubt that's how it should be tackled.

I've read a pdf on brakes and learned that there are so many types and equations to accommodate each one. The closest I've seen to the one above was that of a single block brake; with 3 variations on the position of the line of action (the tangential force), $f$, passing through, above, or below the fulcrum.

![An example of a brake system, with the tangential force below the fulcrum] (https://i.stack.imgur.com/xtKAl.jpg)

It doesn't look the same, but the proof in this was the one I used. That being:

I think my mistake was that I used the 16 in-lb torque as the braking torque ($T_b$) and went on from there.

And then a summation of moments at point B (counterclockwise positive), giving:

I also considered the pinned support reaction at A, which gave off another incorrect answer.

Browse other questions tagged torque friction braking or ask your own question.

-1
Required force to start the motion of a leaning bar

2
Calculate proper stepper torque to convert clay extruder from compressed air to leadscrew actuator. Is this the correct way?
0
How to find required clamping force of bolts to prevent flange faces from twising due to torque?
0
How to calculate the torque of 4 wheeled vehicle before slipping
2
Calculate max deceleration without front wheel slipping (bicycle)
1
clamp force or torque for non-steel screws - brass or aluminum
3
Mechanism for controlling the clamping force
1
Determine applied force due to torque