What is the behavior of unpowered FPGA pins on I2C bus?

The development board for the touchscreen chip we got is too good ;)

The chip provides the readouts over I2C, passes it to FPGA (I could provide the model if I find a magnifying glass... but I'd prefer a more generic answer anyway) and the FPGA passes the data over RS232 to an FDDI which connects over USB to the PC.

There's a jumper that allows me to remove power from the FPGA, and there are convenient test points on the I2C bus which I can connect to the bus with my device, but the FPGA still remains connected.

What kind of problems/interference can I expect from it - present on the bus, unpowered?

It does, unfortunately depend a little on the FPGA itself.

But most cases that will probably not work, unfortunately. In many logic chips with programmable I/O type pins, the final stage looks a bit like this: 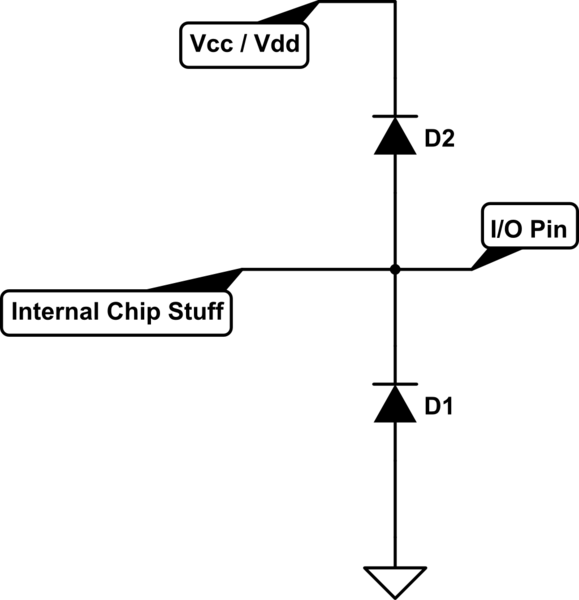 This is both a side-effect of the cheapest to make final stage and for protection.

Now if you turn off the power to that stage, the Vdd/Vcc voltage goes to 0V, so the top diode, D2, will conduct towards that. Since I2C is powered with resistors from the power rail in an open-collector type scheme, the diode will easily conduct those few mili-amps away, so damage is very unlikely, but the bus will never see a logic one.

If the FPGA is 1.8V or 2.7V or 3.3V itself, but 5V tolerant on the pins in question, the top diode will not be there and the problem may very well disappear, but other characteristics may still have similar influences. (JFETs that turn on because their biasing disappears at power-off, though highly unlikely, technically possible).

An option would be to break the traces and then (if you want the FPGA again later) to add decent analogue switches. Sometimes traces come along the board in such a way that a simple dual Analogue Switch can be dropped right across a gap you made with the scalpel. I've done that a couple of times. It's not something you'd design in, but for 400kHz I2C there are plenty chips that could do it and as an after-market mod, it's not even the ugliest you could think of.

3
What is the need of having a separate flag as Auxiliary carry in microprocessor 8085?
2
What is the difference between BOR and POR micro-controller reset modes?
8
Is there an FPGA which could "re-wire" itself on the need?
7
What IPC mechanisms exist for the i.MX 7 (or i.MX 6) multi-core processors?
6
What are the pros and cons of using Zibgee over BLE or vice versa for IOT application?
7
What needs to be considered when configuring the clock system for a MSP430F5xxx micro-controller?
3
What is the difference between I3C and F4C microprocessor crystals?
4
What is the advantage of using GPIO pins as sinks instead of sources?