Shearing Stress at the Boundaries of two infinite Planes

This is a worked example on a book I am reading (Fundamentals of fluid Mechanics). 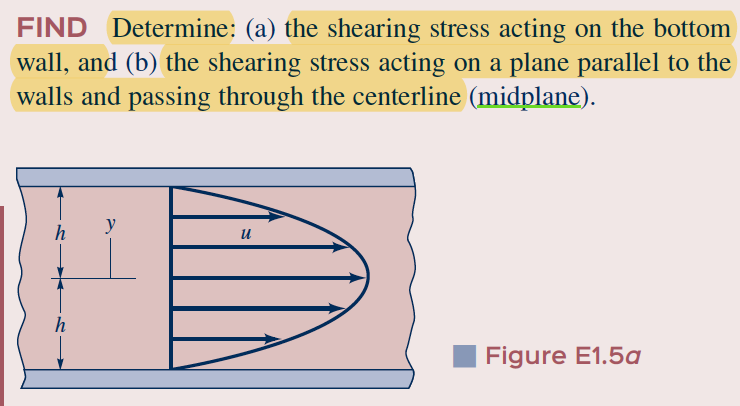 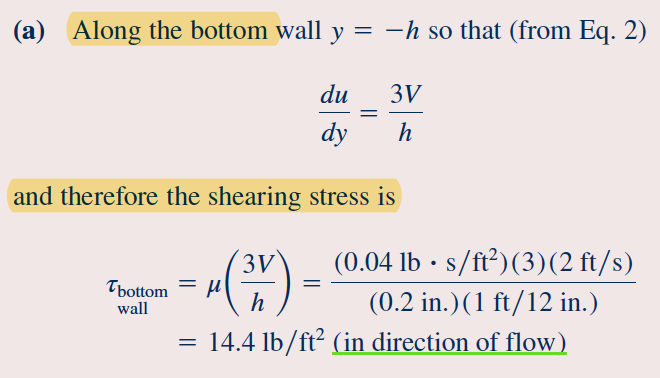 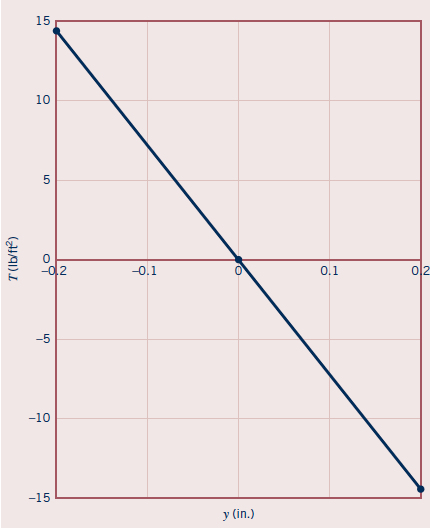 "Can you explain the change in sign? [Hint: Sketch a sheared fluid particle adjacent to the top plate.]"

They calculate the shearing stress in the top layer, bottom layer and middle layer.

I do not understand how the shear can go be in opposite directions at the top and bottom, especially given the symmetry of the problem and the flow being in the same direction.

Hope you can help me out.

If I get your point correctly, It is only a sign convention.

say in a pipe with the positive flow gradient we consider a plane C parallel to the pipe axis. 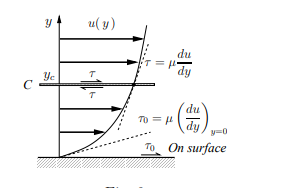 If I understand your question correctly your qualm is about $\tau$ being negative.

I will use the same image as karman because it is a very good one:

you will notice that shear stress is defined as:

Now notice in your image: 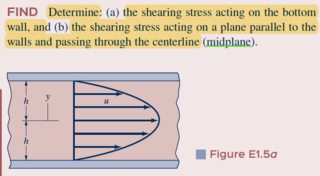 that for increasing y, the velocity increases up to the middle of the pipe. (That is because the fluid in the center transfers momentum to the fluid that is closer to the wall, although this is incosequential to your question).

The important thing is the gradient of the velocity $\frac{d u}{dy}$. As you can see for increasing y, from the lower wall up to the middle of the cross-section the gradient is positive (ie. velocity increases).

Right at the middle, the velocity gradient is zero (local extreme/local maximum), therefore the shear stress is zero.

Above the middle of the section, velocity drops, therefore the shear stress is negative.

This is all a mater of convention. If you had y, increasing downwards then the upper half would be positive, and the lower half negative.

UPDATE 1 (The way I perceive it) shear stress is a measure of the forces between adjacent layers of the fluid (in laminar flow specifically). High shear stress, means that between each layers there are high forces and therefore there will be a greater change in velocity. However, as you can see in order to determine the change in velocity you need to consider a direction orthogonal to the velocity (hence the gradient). So, (as in other cases of shear stress definitions), shear stress is positive when:

while it is negative when:

if you notice the graph with the definition of the shear stress, there is a very interesting detail. (see bollow for detail). You can see that $\tau$ is presented as half arrow.

The half arrow (among other things) make sense because $\tau$ is applied on a surface/plane. So the top half arrow is applied on the top of the fluid surface "layer". Also notice that immediately below there is another half arrow pointing the opposite direction. It is useful to note that this $\tau$ is also positive. You might ask: "How can it be?"

The convention is that the sign of the shear stress (Actually all stresses but that;s another matter) is defined by two things:

So for example: the top half arrow:

Also for the bottom half $\tau$ arrow:

Following this convention for shear stress, uses the positive direction on the horizontal axis (where velocity is positive).

Not the answer you're looking for? Browse other questions tagged mechanical-engineering fluid-mechanics stresses pipelines shear or ask your own question.

3
Does the bearing stress vary along the bolt?
2
Thermal Conductivity of a Layered Composite
2
Difference in shear stress - one bolt vs two
2
What is the difference "maximum" shear stress and shear stress
0
How does 3 "liars" in Strandbeests work?
0
Finding out the direction of the maximum shear stress in a 3d stress tensor
0
Does F_x generates "Transverse Shear Stress" shear stress at the fixed end A?