How does the parabolic curve help in the integrity of a suspension bridge?

Why do suspension bridges need to be parabolic? Why can't they connect the towers directly?

Would it not use less material and cost less? 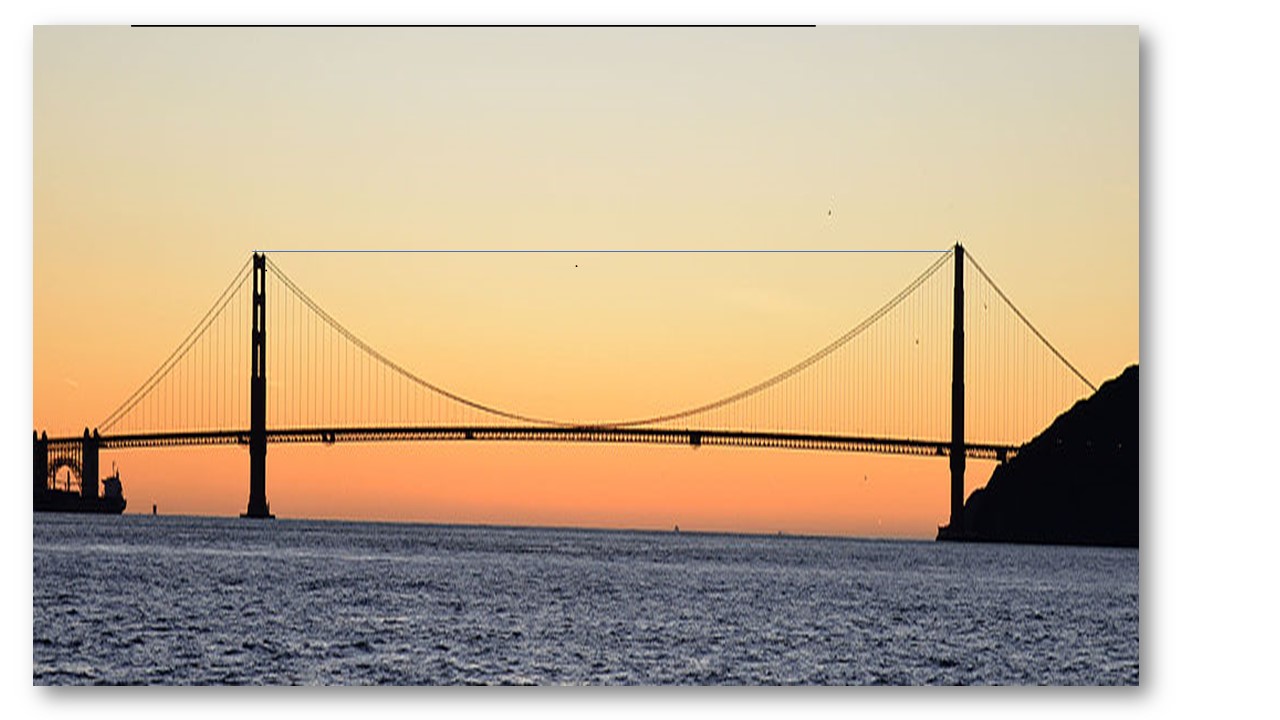 The next time you see some kids playing jump rope, go out and ask them to hold the rope perfectly straight. If two kids hold the two ends of the rope with it dangling until it is almost on the ground, they have to hold the ends of the rope up but they don't have to pull much, end to end. The straighter the rope is, the more they will have to pull. If you want the rope to be close to perfectly straight, they will be pulling with all their might. Even then, if you sight along the rope, you will see a curve.

Similarly, for a suspension bridge, the longer the dangle, the less the tension required at the ends. The bad news is, we can't have infinitely tall towers so there has to be some tension which is why the cables are tied off on each end of the bridge.

If we had adamantium cables with appropriate anchors at the ends, it would be neat to have a bridge with mostly straight cables but adamantium is kind of hard to come by.

A suspension bridge cable is the most effective use of material. Because it uses high tensile cables in a position where they are the most effective material: tension. The parabolic shape is the closest natural geometry a cable assumes under uniformly distributed horizontal load ( not the self-weight, that is a catenary curve).

It has reduced the structure in a way that all other stresses are basically eliminated. Hence the parts and components that were needed to support them are eliminated saving material and weight.

Any other shape like a truss or concrete hollow structures wastes a lot of efficiency by resisting the forces of gravity by the beam action and resisting the bending stresses by the inefficient balance of compressive and tensile forces.

The parts that are tasked to support the compressive stresses have to be thick and wide to resist buckling, so they are very heavy and unnecessarily add to the weight of the structure.

It comes to a point where for some long spans any other type of structure other than cable can not even support their own weight.

The beauty of cable is it automatically assumes the best shape to resist the gravity forces with the least amount of unpredicted stress concentration or excessive loads on a member, such as if you have a suspended bridge that say, due to a traffic accident has all the traffic-jammed in a certain part of the bridge the suspended cables will squirm a little to accommodate the imbalance.

Consider this simplified analogue to a suspension bridge: we model the roadway as a single point mass $m$, which is suspended from a rope attached to the cables. Now think about what's the best angle for the cable to make at the attachment point: completely straight, or hanging through a bit?

The answer is, it must hang down at least a bit. Recall that cables transmit (approximately) only tension forces, i.e. the force that the cable transmits must always point along the cable itself. So with the cable completely horizontal, the forces must also be purely horizontal and there's no vertical component that could hold the mass up!

In the angled version meanwhile, the force decomposes into a horizontal component (which is cancelled by the opposite end of the cable) and a vertical one (which is added by both sides of the cable):

Note that with a completely horizontal cable, the force-addition parallelogram would be perfectly flat, i.e. the vertical component would be zero. You could make the angles shallower, but then the magnitudes of $F_\text{L}$ and $F_\text{R}$ would need to be very big to still get enough vertical component.

In a real suspension bridge, you don't have only one vertical rope but multiple, but the principle is the same: at each attachment point, the main cable need to make a bit of an angle in order to give you a vertical force component. And in the limit of infinitely many attachment points, this means you want a smooth curve with constant positive second derivative (the infinitesimal version of these vector-addition parallelograms). That's a parabola.

It's not possible for the cable to be perfectly horizontal. Cable can only pull; that is, the force they apply at a connection point is along the direction of the cable at that point. So a horizontal cable would be able to exert only a horizontal force. But the cable needs to transmit the weight of the bridge, and to do that it must apply a force with a vertical component.

The cables here make an angle of about 45 degrees with the towers, which means that about half the force they are applying to the towers is vertical, which means that the total force they are applying is twice what they would need just to support the weight of the bridge. The other half of the force from each cable is horizontal force cancelled out by the cable on the other side of the tower.

If the angle between the cable and the tower were larger, then an even smaller fraction of the total force would be vertical, and so we would need even more horizontal force to get enough vertical force. The cables would be shorter, but the total force they would exerting would be greater, so they would have to be stronger, which means making them thicker.

A suspension bridge is an efficient use of material, because all the forces in the structure are carried by tension, and not by the parts of the structure resisting bending. Beams which resist bending are often useful components of structures, but they are an inefficient way to use material because the stress in the beam is not constant through its depth, and is small near the axis of the beam.

You can imagine the road deck of a suspension bridge to be made of short segments which are hinged together, so they can not carry any load at all without some additional support. That support comes from the vertical cable attached to each "hinge point" which pulls upwards to balance the weight of the deck plus whatever is crossing the bridge.

If you tried to replace the top cable with a horizontal beam, in fact there would be no point in having the top cable at all, since you could just make that beam part of the deck of the bridge and get rid of all the vertical cables. But doing that would make a structure that was much heavier than the cable suspension system.

(Of course a real suspension bridge structure does have to withstand some bending loads caused by wind loading, etc, but that can be ignored when understanding the basic principle of how the design works.)

14
Are pontoon bridges being considered to extend bridge span?
21
What makes suspension bridges unsuitable for railways?
20
Does a roadway bridge experience more load when vehicles are parked or when they are moving?
10
Can the structural integrity of bridges be measured in real-time for safety?
12
How can large bridges be made resistant to earthquakes?
10
Determining the difference between US Bailey Bridge, UK Bailey Bridge, Mabey Compact 100 and Acrow 300
3
How and WHY does the tension in an arch dam or bridge change as the degree of curvature and radius of curvature change?
4
Why don't towers use buoyancy to reduce weight?
0
Equation of the parabolic suspension bridge cable when the deck mass is known
1
Why don't we have parabolic ceilings with mirrors & a light at the focus?