Considering all the variables are the same, how to rank these connections from highest to lowest bending moment? 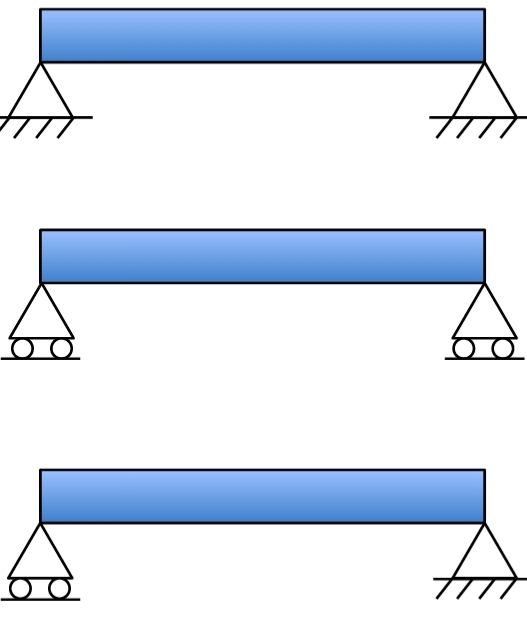 The top beam is twice as strong as the two others below it.

the first beam max stress varies along with the height of the section in an inverse triangle starting from zero at the base (small-angle: no strain due to pin-pin support) and ends up on the top face as $\sigma max$.

But the on other two beams

It depends on how you choose to interpret those images.

When doing simple models and especially when one's at an early stage in their education, the answer is that the three are equivalent.

The reason is that in these simple cases, we usually ignore what's actually drawn and just assume the beams are actually supported at their centroid.

In doing so, we ensure that the supports are along the beam's neutral axis. Therefore the fact that the first example is pinned-pinned (restricting any horizontal movement) and the others have rollers is irrelevant, since there won't be any significant movement for the pinned supports to restrict (assuming small rotations).

However, if we instead take the given images literally, with the supports on the bottom fiber, then the answer is as given by @kamran's answer. If the supports are both pinned, then the lower fiber won't be allowed to stretch, which effectively imposes a compressive force throughout the beam such that the lower fiber becomes the beam's actual neutral axis.

The bottom configuration is the classic simply supported beam. You didn't mention where the force is applied. However, if we assume it acts in the middle, the maximal bending moment would also be located there. This is a Statically determinate structure, so the reactions and thus the moment distribution can be deduced straight forwardly.

The middle configuration is actually the same, except the whole beam can move horizontally. While it's moving, the deflection and moment distribution are expected to be the same us the last example, even though the structure is not Statically determinate.

The top configuration is more interesting. Since there are 2 pin joints (4 reactions), the system is statically indeterminate. It means that the pins reactions (both magnitude and direction) can be deduced only by taking the beam stiffness into consideration. Since both ends cannot move horizontally, the pins will apply horizontal force on the beam. If the beam is very stiff, It will not deform significantly. Thus, the pins reactions will be almost totally vertical and the bending moment will be the same as in the other two configuration. However, if the beam's stiffness resulted in large deflections - the horizontal force will be considerable. This force, eventually, will create a bending moment that opposes the one created by the vertical component. In other words, the maximum bending moment is reduced as the beam stiffness decreases.

You can imagine a rope as the extreme case. It is obvious it will deform into a triangle shape. the force reaction will act along the rope - causing zero moment along it.

In classic structural theory/practice, a model beam is represent by a line element along its neutral axis (zero strain/stress), on which the load is placed on, and supports are attached to. From this assumption, all three beams in the example will yield the same internal forces (M, V), if loaded by an identical vertical load.

However, in the real world, the supports are often made on the extreme fiber/edge of the beams, if pinned on both ends. secondary forces will result, as the tendency of the supported face to lengthen/shorten is restricted. The secondary forces include a pair of equal but opposite horizontal forces, and a moment (P-Delta) that counters the moment from to the applied load, so in an impression, the beam with pin supported ends can carry more load. Not quite true.

While, numerically, moment capacity is a good indicator of the strength of beams, it lacks the physical significance of stress and strain, that are the ultimate determinants in deciding how much load a beam can carry without resulting in failure. So in order to compare the strength of beams with different support conditions, you shall set the stress/strain acceptance criteria, and examine the stress/strain diagram along the entire beam to draw the conclusion. Good luck.

Not the answer you're looking for? Browse other questions tagged structural-analysis structures or ask your own question.

7
How do you check a weld for applied moment?
4
Is pin column-beam joint always have less moment, more deflection compared to fixed joint?
3
What are the principles (if there are any) behind the conservation of bending moment in frame analysis?
2
What is the bending moment formula for continuously supported beam of equal span?
1
Understanding Bending and Twisting Moments in a Plate
1
How to determine the fixed end moment?
0
Determine Bending Moment
0
Help with understanding bending moment diagram of a frame structure