In both simulation and reality, I'm simply unable to get this circuit to oscillate in a way that creates extra power dissipation. The only direction I can get it to go, is less power dissipation due to I think two things: 1). The good high-frequency gain of the 2N7000 and 2). The severe restriction on available current to charge Q1's gate (~340uA @ Vbuss = 340VDC). My biggest concern are transients that could be coupled onto Q1's gate via its C_gd (Miller) capacitance so in LTspice, I've inserted PCB and external-wiring inductances around Q1 and Q2, and modified these inductances in many different ways while pushing transients into the system. My hope was that something goes awry, but the current, under the shamefully few conditions that I know of to consider, seems to me to be truly clamped to around 700mA maximum, thus placing a hard limit on Q1's power dissipation at about 250W or less.

As soon as my microcontroller hits the "DUMP" button (turning off the PC817 optocoupler, hence allowing Q1's gate charge up) Q1 fails catastrophically. The three-ohm resistor makes an alright fuse, keeping the 0.6 kilojoules mostly in the capacitors unless a flying piece of this resistor-fuse gets across the buss terminals, in which case the threshold-of-hearing in my left ear went up a little last night.

Why is this too much to ask from a Minibloc? Either transient thermal parameters are coming into play here that I've missed, or there's sustained oscillation that I've missed.

Looking forward to your response; thanks. 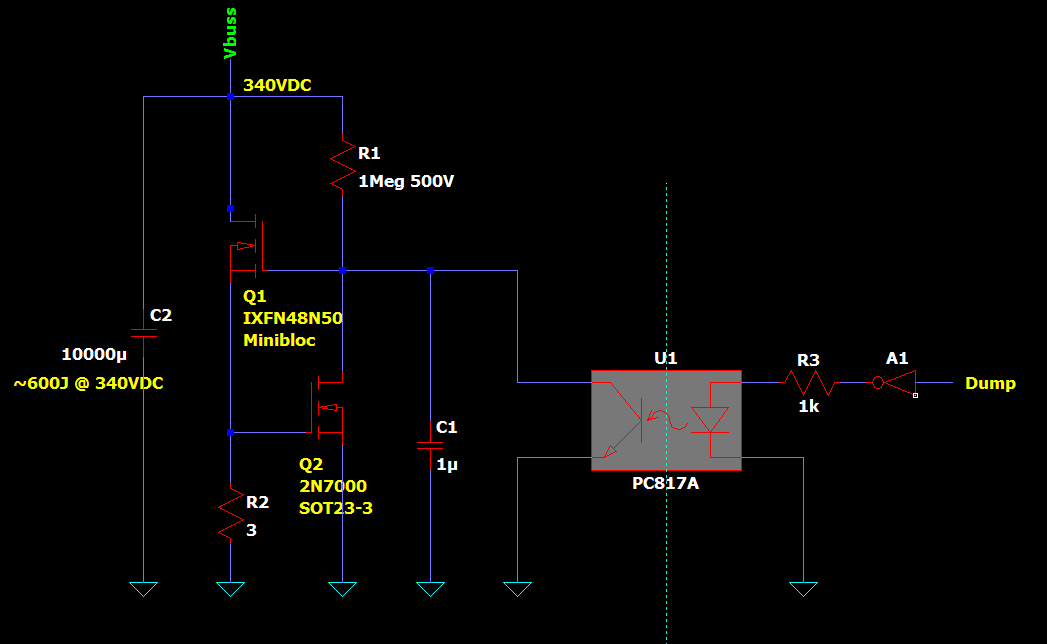 This explains why your 3Ω resistor works as a fuse. This is a symptom, not the problem. The 2N7000 has no impact on this, aside from triggering the destruction.

The resistor gets more current than it can handle, so it acts as a fuse.

Now this is just theoretical numbers. The true question is as I asked in the comments Justin/Flame: Did you measure current in ixfn48n50 in the simulation?