There are two (common) uses of the stiffness matrix. One related to Finite Element Method and a second in stress strain relationships.

For example in the triangle element below you get the following stiffness matrix. Where the values of stiffness $k_{ij}$ are $k_{ij} = \frac{A_{ij} E_{ij}}{L_{ij}}$ 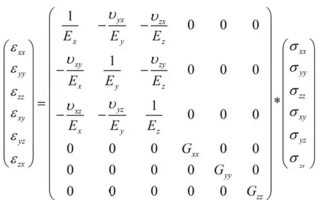 Or its inverse form, which is in the form of $\mathbf{\sigma= K \epsilon}$

Relationship between the two.

There is a relationship between the two and there are some differences.

Common theme: they both try to relate a force/stress to a displacement/strain through stiffness

Difference: the relationship between stress and strain concerns a point, while the stiffness matrix refers to a structure. This has the result that in the case of Hooke's law there are stress (points in space or infinitesimally small volumes ) involved; while FEM concerns with elements with cross-section with length.

Some people indeed use the same term. That is indeed not correct.

Some probable reasons for doing so:

9
Steel selection for building a trailer
4
FEA: What boundary conditions am I missing?
1
FEA: Changes in initial geometry cause divergence of solution
2
On the proof of the Principle of Virtual Work
1
Modification of Beam Equation for Thin Sheet
1
Solving for stiffness matrix numerically by a set of measurements
3
Probability of structural failure
1
Same E for axial and rotational stiffness?
0
Axially loaded member with a spring / Mechanic of Materials