How can I apply a load to an electric motor to simulate realistic conditions for an experiment?

I am trying to perform some experiments with a motor and I want to run it under realistic conditions (or at least not unloaded). Is there an easy way to load a motor?

A couple ideas I had include: attach water paddles to paddle water continuously, attach pulley to lift weight, clamping brake pads (getting desperate), ...

I am working with a 1/3 HP three-phase motor.

You could couple the motor to an electric generator equipped with braking resistors. This is how dynos driven by test vehicles are slowed down.

Attach a flat paddle across the axle that moves against the air. 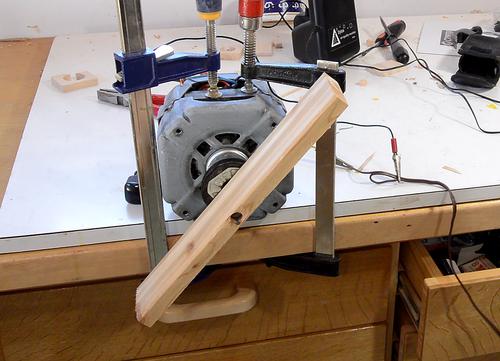 You could use almost anything as a load. As has been mentioned before, a brake would work, so would a second motor, driven as a generator with a bank of power resistors as a load (They can get nice and toasty). A variable pitch propeller in air would work, varying the pitch would change the load. So would a centrifugal pump circulating a fluid, if you had a flow control valve opening and closing it would vary the load. The possibilities are pretty much wide open.

Personally, I think the easiest to implement would be using a second motor and a resistor bank, but that's mostly because that's what I did way back when I was in college.

Not the answer you're looking for? Browse other questions tagged mechanical-engineering motors gears pulleys or ask your own question.

7
How can I model or simulate motion caused by an internal vibrating motor?
2
How to calculate the steps needed for a motor to rotate a circular object in a pulley configuration?
2
How can you sync an electric motor with an IC engine?
0
Transmission for electric motor
0
How to attach a cylindrical load to a motor safetly