Why does a gear have extra holes?

In a gear you normally have a center hole for the shaft to be put into. Why do some gears have holes surrounding that center hole?

Is it for weight reasons? Does it add stability? Is it so you can add special parts?

Different gears have different drivers for having holes.

One way you can categorize gears is by whether they are used primarily for transferring: 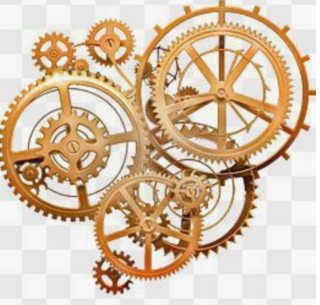 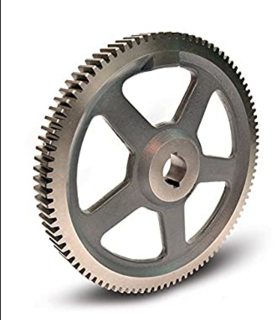 Gears that transfer motion don't need to transfer power. So their strength is not usually important. The main parameter is their diameter which determines the kinematic behavior of the gear train. Because of that:

These gears are usually encountered on motor gear boxes. It is noteworthy that you may have torque transmission without any angular motion (when the torque exactly counteracts the load). That torque generates forces and stresses on the gears.

So for gears that are subjected to high forces and transmit torque (and power), removing material and opening holes doesn't make much sense, because essentially you'd be weakening the gear.

Secondary reasons for this type of gear are:

Especially in the case of gearboxes with high losses, it is desirable to remove heat as fast as possible. A very common way is to use lubricant to enhance the heat transfer through convection. If the linear velocity of the gear teeth is high (at least 3 m/s), then it is possible to use the gear itself to create a lubricant mist inside the gear box (the alternative would require an oil pump which would spray the lubricant). See image below for an example arrangement. For the method to be successful, it is imperative that at least one gear to be partially immersed in the lubricant fluid). 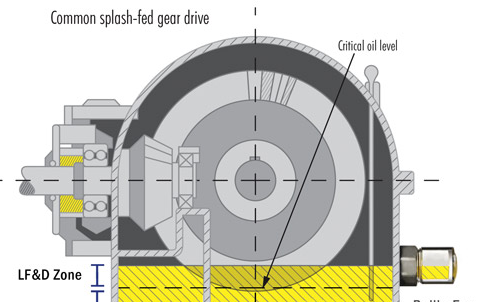 The extra holes in the gear would help by creating more mist in the gearbox, and also by providing greater surface for the convective heat transfer interaction.

In addition to the other answers such as weight reduction and inertia, there are other possibilities:

Often there can be a precision machined hole for timing purposes. A common solution for some / many internal combustion engines to get camshafts timed to the crankshaft. Of course, dial gauges may also be used.

Also, there can be threaded holes to help with removal especially when space is limiting the use of normal gear pullers.

It could be for combination of reasons.

Also someone may have to pick the machine up and carry it.
Reducing weight is not just related to the intrinsic function of the machine, its shafts and so on.

Depends on the application, but generally there are two reasons why: reduced weight lowers inertia loads (opposite of a flywheel), but more often less material = lower costs if these are high volume parts.

Cost wasn't mentioned yet - Depending on the manufacturer, their processes, the cost of the raw metal, and the accountants it may be that the waste is swept up and reprocessed.

For gears made of brass, bronze, aluminium or titanium this is well worth doing. Any other exotic metals depend on the cost per kilo.

Copper and Lead would be excellent metals for saving too, except they're not used in gears at all being too soft. An electrician would generally save copper wiring extracted from a job, and a plumber/roofer would save lead from roof nails and flashings.

For steel gears, the metal is worth far less. Prices vary but a kilo of brass might be worth $5 but a kilo of steel is only 3c. This is where volumes come in.

Another cost saving is in shipping. A heavy part costs more to ship than a lighter one, or you might fit 6 in a box where only 5 unlightened ones would fit.

Not the answer you're looking for? Browse other questions tagged mechanical-engineering materials gears statics structures or ask your own question.

22
Why do car wheels have holes?
4
Designing non-self-locking worm gear
0
Does Cluster Gear Change The Gear Ratio
4
Why do single speed RC cars use a gearbox?
4
Why do tower cranes have gear shifts?
2
Why do herringbone/double-helical gears have a stable and unstable configuration?
1
Bevel gear design & usage
1
Optimal gear combination with the same ratio
0
Involute Gear Tooth Width Explanation