I always think about how there surely must be natural ways to cool/heat a house, rather than using electricity, like solar panels, heaters, and AC. Does anyone have any good examples of houses/buildings that were engineered to be really effective at cooling and heating themselves, like with lots of ventilation through the ceiling or lots of glass at certain spots to concentrate sunlight?

I have tried looking this up but most results I find use solar panels. I'm looking for more radical examples that really don't rely on technology and electricity.

I'm looking for someone who has gone down this train of thought and has interesting examples to share! Thank you!

There are many ways that one can achieve natural cooling and heating. However, the best solutions are very dependent on the situation. Also, the problem with most of these solutions is that you'd need to plan ahead (don't expect to incorporate them easily into an existing structure). And finally almost all of them are most effective for one or two story buildings.

Basic principle: Keep the sun out in the summer months. Let the summer in during winter months.

In any project that involves natural heating/cooling, an engineer/architect in order to offer the most effective solution has to take into consideration:

If that information is available then the engineer can start to deploy a number of tools. The caveat is that most of the solutions need to be planned in the building before hand (i.e. need to be incorporated in the design of the building).

An outline of some of the solutions is presented in the list below.

WARNING: they will seem in all cases very low tech (that's the point).

The Trombe wall is a passive heating wall arrangement which collects heat during the day and then slowly releases it/creates warm/cool air drafts. The principle of operation can be seen in the next image. 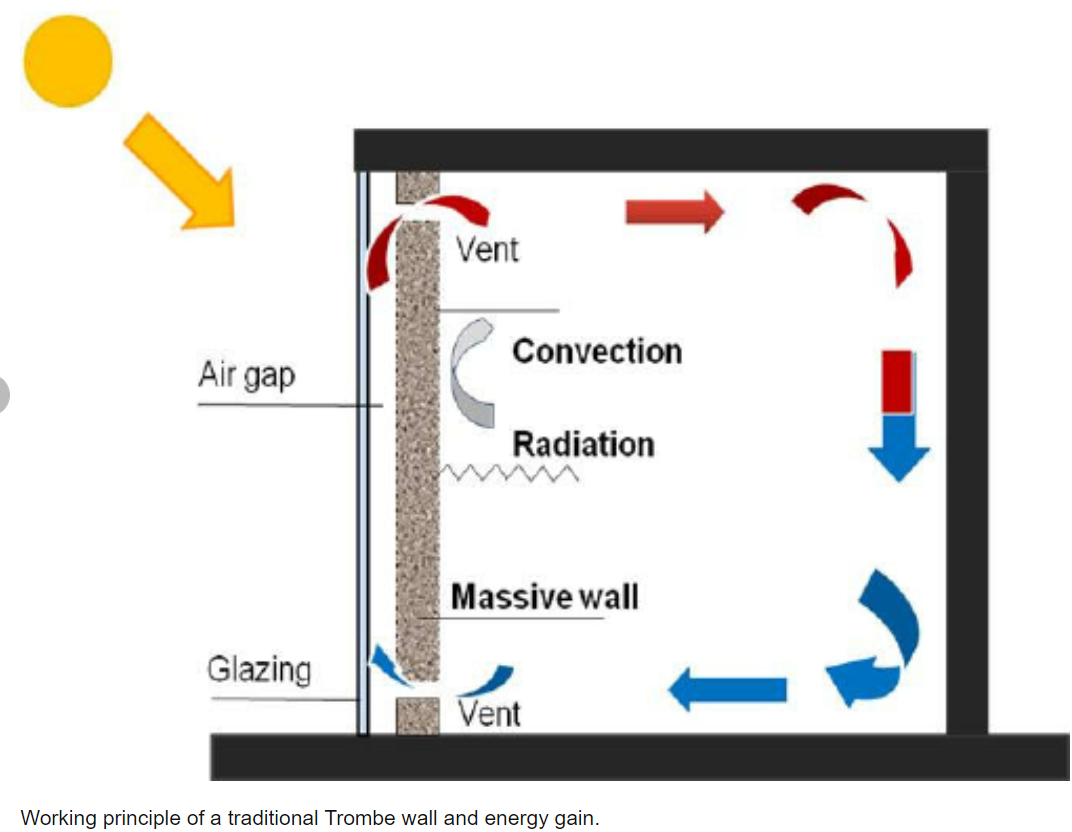 Basically is a wall behind a glass. The glass allows sun radiation to come through and hit the wall. Depending on whether cooling/heating is required the user can open up openings in the wall to allow for warm/cool drafts of air. 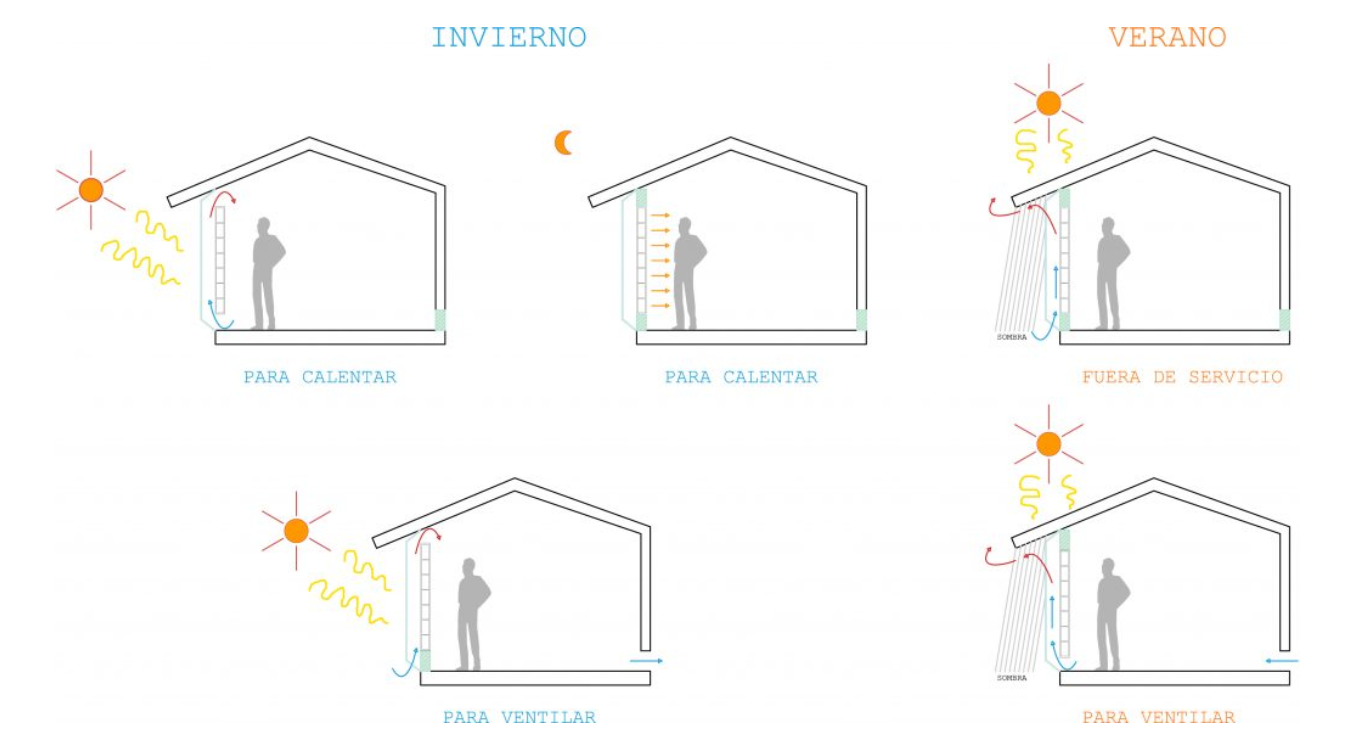 Notice, that the wall needs to be south facing in the north hemisphere, and north-facing in the south hemisphere (this is a common pattern in this post). Additionally, there is a requirement for sun and shading devices (to control the amount of sun in the summer months).

Effective use of plants.

Deciduous trees can be used very effectively as sun controlling devices. Also trellis with seasonal plants on the wall with the greatest sun exposure can be used to great effect. 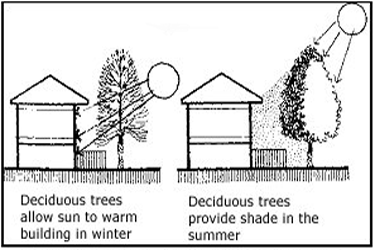 The following image shows a house in the southern hemisphere (Australia), with vines on the north side. 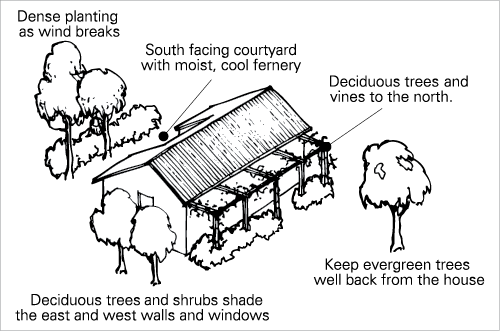 Again the orientation is extremely important. Care needs to be taken with regard the humidity that some plants (especially in the trellis version) can impart.

Another option for sun control devices are louvres. 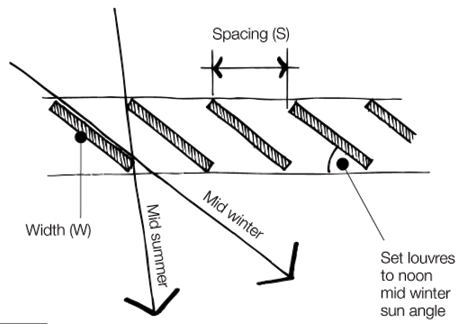 Again, the idea is:

creating passively airflows in the building that promote heating and cooling

This is a matter of design (in part of the world its called 'bioclimatic'). Again the orientation of this design is of paramount importance. i.e. Left side in the image in the north hemisphere should be facing south ( while the right should be facing north). 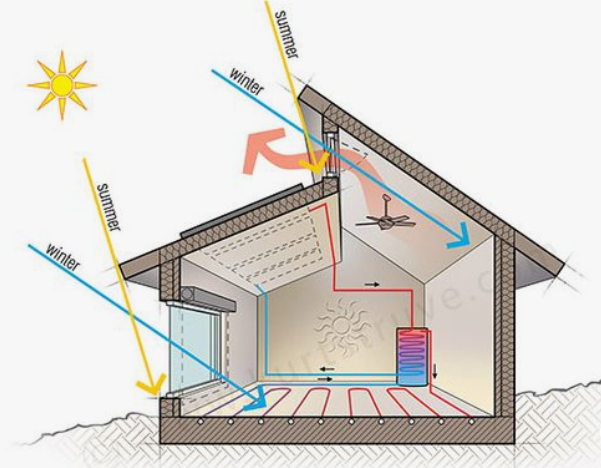 The general principle is the following. The windows in the center section (near the top) allow sunlight to pass in during the winter months, but not on the summer months). Also notice that heat collectors on the roof (facing the sun).

Additionally, the windows in the summer months act as a chimney. They can be opened, and as warm airs travels up, it accumulates at the top, and gets out of the building. This also creates a small draft, which creates a sense of cooling.

using "heat batteries" in the house

This is something that, is very interesting, however arguably it is difficult to tune it just right. I'll try to describe the principle. The idea is that you have a heat storage buried in the basement of the building. That heat storage can be used for heating and cooling.

Conversely, in the winter: the idea is to heat up as much as possible the house (and the heat storage), and that heat is again release during the evening and night.

Insulation: The most important thing.

All of the above, don't make much sense unless the building has a adequate insulation. In order to be able to control the heat comfort in a house, with the minimum effort you need to have it properly insulated (thermally and humidity-wise). This is the most important pre-requisite for using any of the above techniques effectively.

The best place to find technologies for passive heating and cooling, is in researching old buildings. There has been a lot engineering ingenuity that has been lost over the ages due to the simplicity and convenience of an HVAC.

In the middle east and specifically Iran they have used passive air conditioning for centuries. 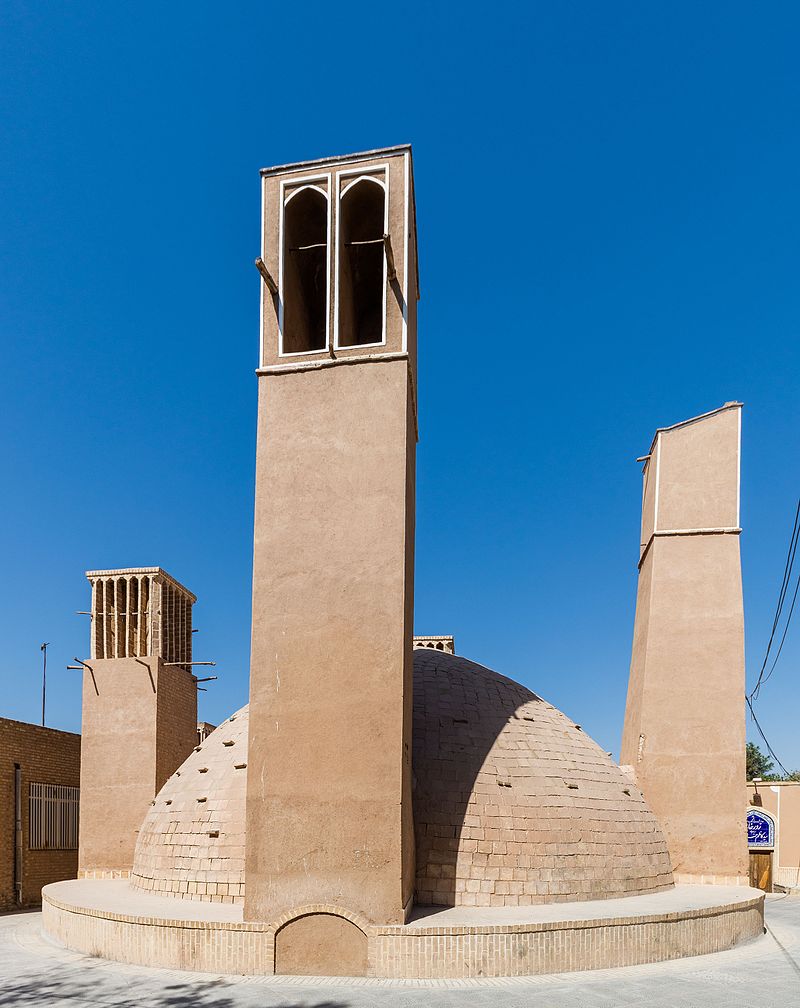 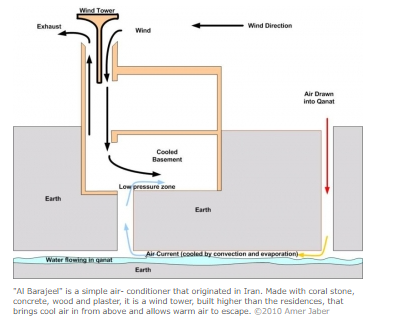