"Heavy-duty" or not, can my drawer slides really support this weight?

Okay, so recently I got a Dewalt 735 Thickness Planer. 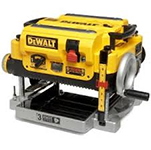 It's great at what it does. (It even LOOKS like it's ready to consume the tender flesh of lumber, like some twisted Victorian lumberjack... though, maybe that's just me).

Anyway, the problem I've been experiencing with the tool is that, while planing, should a board exceed a certain length, such that the midpoint of the piece is no longer supported while some portion of it is still being cut, the board tips, resulting in snipe (a gouge in the board, resulting from the angle shifting mid-operation).

Okay, no problem: I'll just build some supports. Now, I just so happen to have some Heavy Duty 22" full-extension 150-pound-rated drawer slides - about a dozen of em - from a different project. Cool. I'll run a roller bar between em and make the whole deal extendible at need. I can even add flip down leg supports if needed (though if the slides are strong enough, I'd rather not).

As I was doodling this out, my son walks in and asks what I'm looking at. I muse aloud that it's a shame I don't have longer slides. 22 inches isn't terribly huge for infeed/outfeed.

Then he asks me: "So why can't you just hook two together? Just stick another piece between em so you can screw into both sides of that." Heh. From the mouth... of... babes?

Now, intuitively, this seems like a bad call (certainly without the leg support). But I'll be damned if I can figure out WHY or what to tell him. Some long-forgotten, niggling memory of similar suggests this is a Static Equilibrium problem, which - despite it having been decades since I've looked at any of this - I have some vague recollection on how to calculate. But it's the addition of the strut that hooks the two slides together I cannot account for.

Now, although the finished version of either approach will have two slides with a bar spanning them, I'm reducing this to two dimensions for my own old brain to walk through.

Edit additional clarification: the dimensions of the mobile base are 38" wide (the axis perpendicular to the force) by 26" deep (the axis parallel) by 30" tall (including the locking steel casters it rests atop).

It is constructed of the better part of a full sheet of 3/4" Baltic Birch plywood (call it 75 lbs), and contains a small cabinet containing various bits and bobs (~30 lbs). Also seated alongside the planer is a cast iron bench top jointer (~65 lbs), which itself has 2 drawers beneath it containing various sleds, jigs, and blades (~20 lbs). This is all in addition to the four 4" steel casters (~2.5 lbs ea.) the fixture rests atop, and the 105 lbs. planer itself. This accounts for an approximate total weight of ~300 lbs and change. I've been simply treating it as the proverbial "immovable object" in the equation, Archimedes be damned, but that is, I admit, simply because it hadn't occurred to me it's stability might be compromised.

Your best bet is to rig the planer with a couple of carpenter's horses or something on the sides. However, if we want to go your way need to check the following.

Let's say your machine and its base weigh 40# and the base is 24 inches wide. And half of 25#board weight is on the roller half on the blades, say 10lbs sum of the roller, and half of 4 sliders.

Therefore the planer will tip over and we need legs.

say 200, do you think you slider can take that much torque?

2
What materials could be used to make a strip that bends when wet?
0
Positions of Max Load a human would exert on horizontal rods of such a system by positioning leverage & bodyweight?
3
How much weight can an aluminum tube beam support?
3
Which drawer design can hold more weight?
1
How do I calculate how much weight an iron cylinder can support?
8
What is the name of this particular mechanical linear position switch made of perforated spring strip?
0
Does the corbel angle govern in this scenario? If not, how is load spreading allowed for, when a load is supported by a wall on a beam