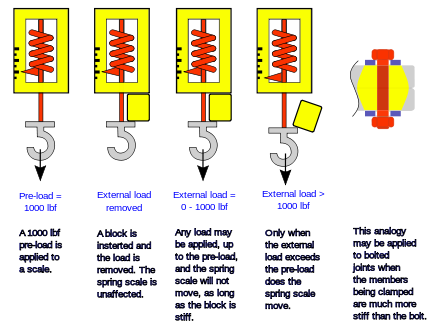 I'm trying to understand bolt preloading. I found this analogy on Wikipedia. I understand that as the spring is loaded to some pretension and the block is inserted, as we apply an external load to the hook the spring won't move unless the load is bigger than the preload, since the resultant force is then towards up.

I still don't understand why only a part of the tension load goes through the bolt. The bolt is the only fastener in the joint, the components don't have any kind of adhesive or anything, how can the tension have "a path" through them?

The other answers are pretty good, but allow me to throw one more analogy out there. I think the last quote in the question is poorly worded so I wouldn't get too hung up on it.

Imagine you're pushing a sheet of plywood up against a door frame, the plywood is larger than the door so it's essentially like pushing into a wall. Now imagine you're pressing on the plywood with 10 pounds of force, but you can actually push with 100 if you exert yourself.

Now imagine someone is on the opposite side of the door pushing back. If they push back with 20lbs of force. You will feel the push, you can then push back harder to keep the plywood in place. This is similar to a bolt without much preload.

The reason the last quote says force is "traveling through the joint", is because if that second person presses with 20lbs force, then the load on the door frame simply reduces by 20lbs, so the door frame is experiencing the change in load; but you're correct in that all the force is ultimately conducted through the bolt.

I need to stress the following:

So I guess what the article is saying is that

So the idea is that you preload a bolt to a high value (close to 80 or 90%) of its strength, and then let it work its magic.

The reason its best to have such a high value (80-90%) is because then the two plates are less probable to come out of the compression state. Additionally you make a very efficient use of the bolt.

If the plates stop being in compression, then they will become separated. If the load is dynamic you'd have a structure that will very soon after fail due to fatigue loading.

Why preloading is better than not. (UPDATE)

The reason why (not preloading the bolt) is worse, is primarily a) fatigue and b) possibly impact loading.

You are probably familiar with S-N curves showing life vs stresses (see below for a typical one). You can see that the static case can sustain much higher loads compared to the multiple cycles of loading and unloading. (I'm sure you've managed at some point to cut a wire or thin sheet just by repeatedly bending it). 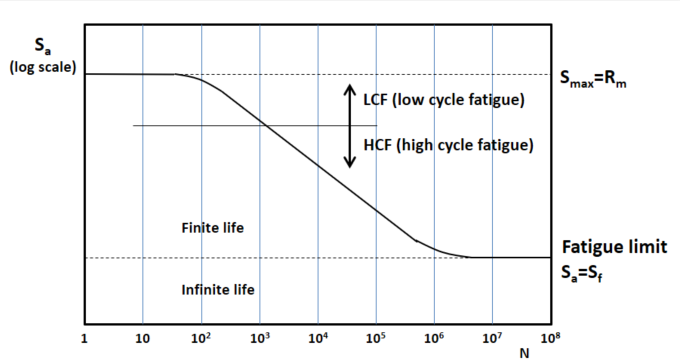 So preloading the bolt, and having it sustain a constant load throughout its life is actually a good thing.

This is something that is a possibility if the application and removal of load is abrupt. One example I've witnessed it, is on bolts of solar panels in windy regions. It the load is not properly preloaded what happens is that the load on the panel could result in exceeding the preload. In that case the bolt extends more (like a spring) and a gap is formed. Assuming that the bolt doesn't break (lets say its only 30% preloaded), because the wind gusts can change in intensity very very fast, that panel will return to its original position. However, it will convert all the elastic energy it accumulated to kinetic, thus a potentially very high impact shock on the structure (and on the bolt).

I drew a sketch that shows the path of tension near but not through the bolt.

Let's say we have a ring around the bolt repetitively loaded and unloaded with the stresses less than the pre-compression.

All that happens is the plates are relieved and heave up, they are loaded again and compress but the path of the load doesn't go through the bolt.

So we have no tread wearing or fusion of the bolt or just fatigue on the bolt. All these happen to a much larger volume, hence less stress in the plate. 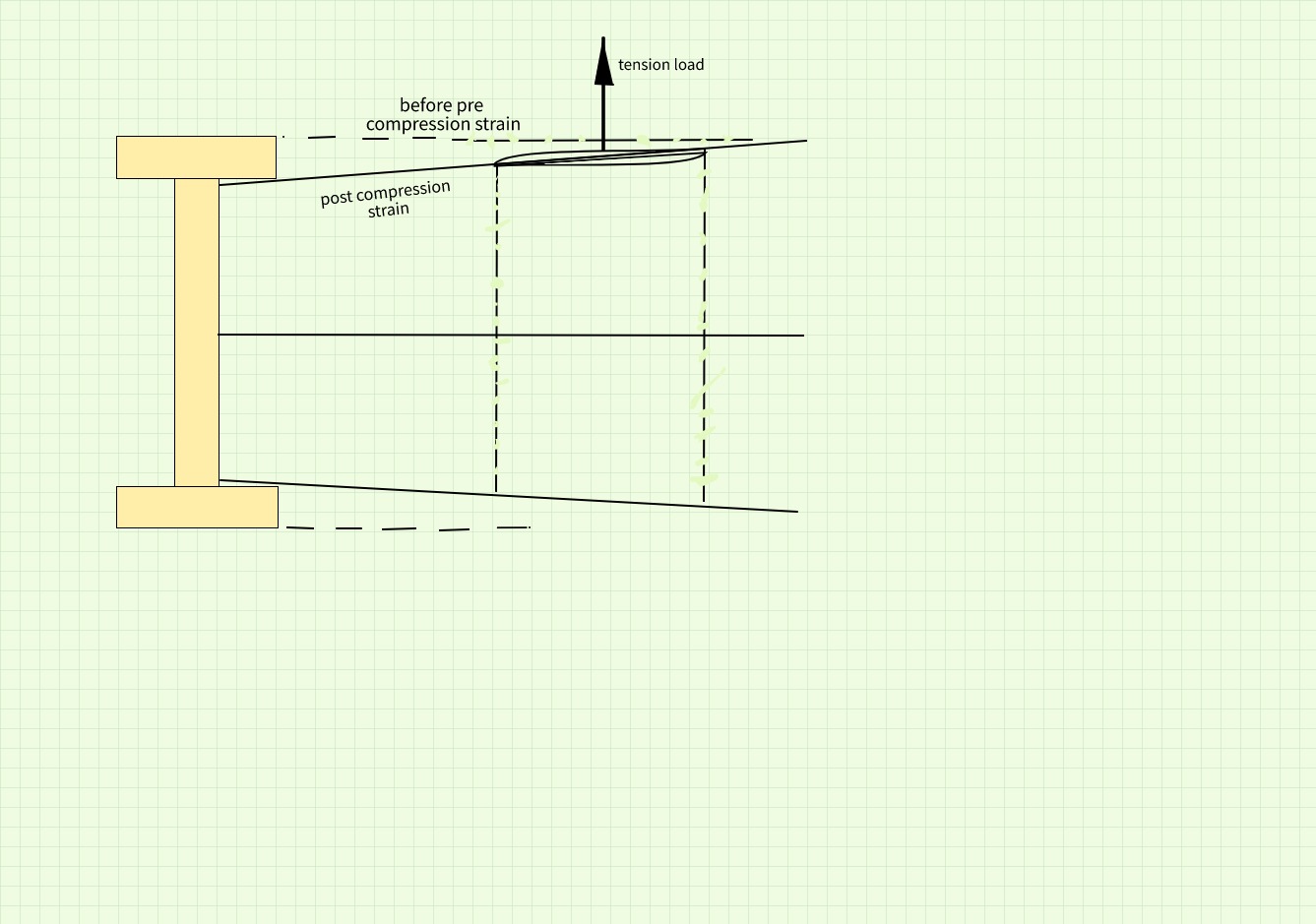 Not the answer you're looking for? Browse other questions tagged bolting or ask your own question.

1
Rotating a bolt around the centre
2
What is the name for a bolt hole with a slot that allows the bolt to be inserted or removed when the nut is loose?
2
Maximum shear force of metric steel bolt
0
Instrumented Bolt - Conversion of measure strain/stress to clamping force
0
Correct term for non-countersunk flat hex screw/ bolt?
2
How the amount of bolt's preload in a single lap joint can change the natural frequencies?
1
Determining when bolt will bend
1
Distribution of Forces into 3D Bolt Group
2
What is the physical significance of bolt elongation length?