I am working on a project that has three 2x12’s supporting a load of 12,000 lbs. similar, but not exactly, to how joists support a house.

e) The two thick wooden planks on each end of 2x12’s (mentioned in “d”) is securely fastened to the 1.5in. part of the 2x12’s, as well as having blocking and other bolted wooden members that leaves (as stated in “b”) 42 in. Of free space in between.

Everything is stable and strong without any issues except for one.

Removing the load; as well as dissembling is not an option.

This will have to be lifted with the three 2x12’s and everything above (including load) remaining intact.

The only problem, that I have now, is that directly under the 2x12 is things that I can not remove and is not strong enough jack it from.

The saddle of the jack is 2in. All wood is Douglas Fir #2 or better.

My plan is to bolt a 4x4 cut to 42in. (to fit in the free space mentioned in “b” and to better distribute the force of the jack).

This 4x4 will be bolted (3 bolts spaced almost equally apart) to the outward face of the 11.25in. part of the front most and back most 2x12’s.

In the absence of detailed information and assuming that the existing fasteners and connections are strong enough just as an illustration and with the understanding that this is not advice, I would consider using 4 Simpson Strong-tie fasteners with, uplift rating of $12000/4= 3000lbs\ 3000*1.5= 4500lbs$

Using 1.5 safety factor we look for a fastener with the 4500lbs uplift rating from Simpson's fastener online calculator here.

This is a picture of a similar fastener. By the way, you made a mistake and posted your comment as an answer. 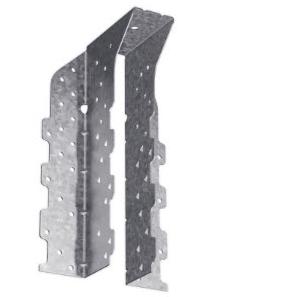