Today I came across this question and I can't sleep thinking about how to solve it. How do I find the principal values and sketch a shear force and bending please see my attempt as I'm not sure if this is correct. diagram on the below picture? 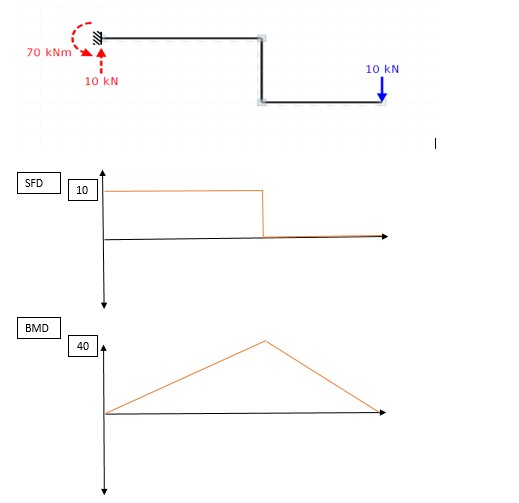 So, in such problems, the first thing to do is calculate the support reactions. Thankfully you've already done that correctly, so we can move on from there.

Now, something to keep in mind when trying to figure this sort of thing out is the fundamental equation of Euler-Bernouilli Beam Theory:

or, in English, we must remember that shear forces are the integral of the applied loading and bending moment is the integral of shear (and more, but this is what's relevant to this problem).

So, let's take a look at your expected solution, adding some names to the points of interest: 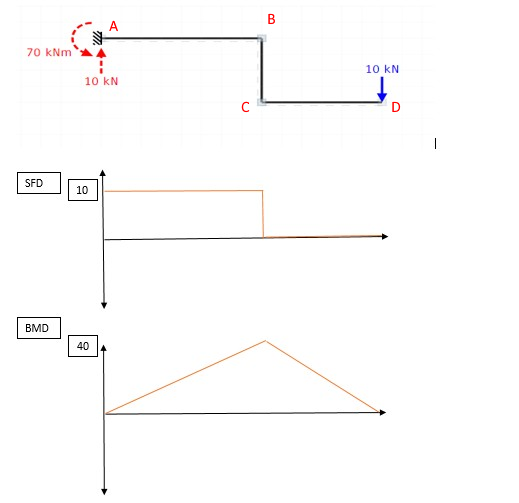 There are a few problems which are immediately apparent:

Let's start with the shear diagram. We know that it's the integral of the applied loading $q$. In this case, however, $q(x) = 0$ everywhere. So we know the shear force will be constant everywhere. But constant and equal to what?

Well, while $q(x) = 0$ everywhere, it does have concentrated forces at A and D, which cause discontinuities in our shear diagram. So we know that the shear at A and D will be equal to 10 kN at those points (let's not think about whether that's positive or negative for now). And we've already concluded that the shear is constant throughout since $q(x) = 0$, so I guess that means the shear diagram is simply 10 kN everywhere, right?

And does a vertical force cause shear in a vertical element? Obviously not. It causes an axial load.

This doesn't break with the rule that shear must be constant when $q=0$ because the instantaneous change in direction that happens from AB to BC and from BC to CD behaves in exactly the same way as a concentrated force: it causes a sudden change to how the beam behaves under the external load: the horizontal segments resist it through shear, the vertical segment through axial. The direction of the internal force itself is always vertical, and that's what really matters. If BC weren't vertical but inclined, then we'd instead see only a drop in the shear diagram as some of the shear is transformed into axial. If BC were curved, then the shear diagram would change according to the tangent at any given point.

And so we move on to the bending moment diagram. This can be done by simply integrating the shear diagram. CD is 3 m long and suffers a constant shear of 10 kN, so the bending moment at C is of course equal to $3 \times 10 = 30\text{ kNm}$. Notice this is also what you get from simply calculating the bending moment caused by D on C (just as you did to calculate the moment reaction at A). That's not a coincidence, it always holds true.

Now, lastly, we need to talk about signs. Below we see the standard sign convention:

This shows the direction of positive internal forces depending on whether you're looking at the left or right side of the section.

The downward force will obviously put BC in tension, which is positive in our convention.

However, the force creates a clockwise rotation to the right of the structure, which is resisted by the counter-clockwise moment at the support to the left. Both of these are negative in our convention, so we get negative bending moment throughout the structure as well.

And now, to check our work:

The three diagrams (axial, shear, bending) are the following. Axial is required because the section BC (at 4[m] from the left support) is subject to axial stress the way it is oriented.

The sections AB and CD are subjected to shear forces (and the value is constant at 10[Nm]). 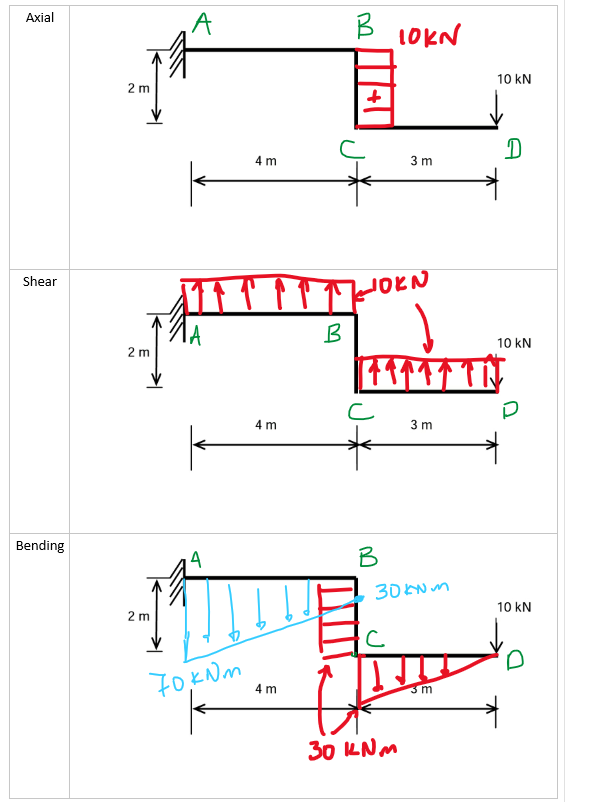 Finally, the bending diagram. A quick note, on this diagram don't pay attention to the sign, just on the magnitude. Section AB and CD have a slope in bending moment. While section BC carries a constant moment. For bending moments at points are: