Can gravity be a driving force for a spring-mass system?

If a spring-mass system is undergoing free vibration (oscillating up and down), then does it imply that there is no gravity?

My tutor always consider gravity when finding the Equation of Motion for such a system. But isn't gravity is an external force? If so, wouldn't the system be technically undergoing forced vibration as it is experiencing an external force in its direction of displacement?

It really depends on the problem and what you want to capture. Usually, in classes, it may be beneficial for the students at an initial stage to disregard gravity alltogether in order to simplify the equations of motion. Below are a few scenarios, starting from the most trivial.

In the following mass spring system:

There is no point in regarding gravity (provided that there is no friction in the system).

The following is the vertical case (from Khan academy ): 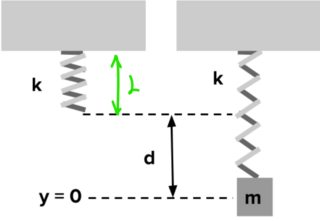 Even in this case, there is no point to consider gravity. Following is the explanation.

In this case, as you can see the undeformed spring, will have an undeformed length of L. That will be the point of equilibrium when no mass is applied.

However, when you add a mass m, there is a new point of equilibrium of the oscillations in translated by $L+d$. At that point, the following is true:

When the mass is at the equilibrium point then spring force and gravity are equal, and the net force is zero (see $mg=kd$ above) .

After grouping terms together forces dependent on y and constant forces:

The same happens when you move y downwards.

So as you can see, even in this case the gravity PLUS a Hookean spring act just as one Hookean spring. That is why its safe to disregard gravity.

When Gravity CAN be a driving force.

There is (at least) one way that Gravity can be a driving force. That is the case of a pendulum. 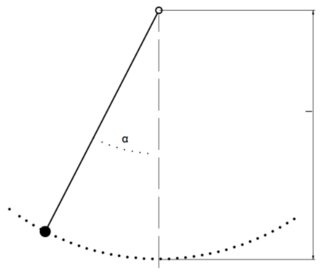 Although this is not a typical mass spring system, it can be modelled as one after linearisation. i.e. the equations of motions of the pendulum without linearisation is:

This is very similar to the mass spring system. In this case, $\frac{k}{m}$ is substituted by $\frac{g}{L}$. This is also a harmonic oscillator, although its not a mass-spring system.

Let's consider a mass and spring system in a frictionless open channel attached at one end to the channel. so that we can position the channel vertically or horizontally.

If we position the channel vertically it will initially deflect by the amount $Y_{initial}= \frac{mg}{k} $ due to gravity. But the gravity is not changing so it can not affect the vibration.

Then if we perturb the system it will vibrate. but the restoring force $\quad kd_x, \quad $, and the mass remain constant, unaffected by the gravity, hence the period and frequency will be the same for both the vertical and horizontal case.

The only difference is the initial deflection, Y at the vertical position, but the vibration and frequency will be the same with the horizontal case.

The period of vibration for the vertical case or horizontal case or in the space with no gravity will be:

This answer might look a bit silly, but I say that it is technically an answer to the question as written.

If a spring-mass system is undergoing free vibration (oscillating up and down), then does it imply that there is no gravity?

No, just the opposite. If you have some concept of “up and down”, then you must have gravity. How else would “up and down” be defined?

Oh, wait, you said “free vibration”. This is the key part of the question, and I will come back to it later.

My tutor always consider gravity when finding the Equation of Motion for such a system.

I should hope so.

But isn't gravity is an external force?

If so, wouldn't the system be technically undergoing forced vibration as it is experiencing an external force in its direction of displacement?

Now let’s talk about what you were really asking. You’ve probably seen such systems described with an equation like …

… even when the systems are vertical. So you’re thinking that this equation looks like the equation for free vibration, yet it should be forced vibration because of gravity, so what’s going on?

Because gravity is constant (independent of both position and time), you can very simply deal with it by:

With this overview in mind, you should be able to pick up the details from NMech’s answer.

Not the answer you're looking for? Browse other questions tagged mechanical-engineering vibration or ask your own question.