I'm considering the problem below.

It's a setup with a roller joint and a pinned joint with a hinge between the two rigid links.

Since there are now 3 unknowns for 3 equations and a zero moment at the hinge the system is onefold statically underdeterminate. If I would add an external moment over the hinge would that make the structure statically determinate? 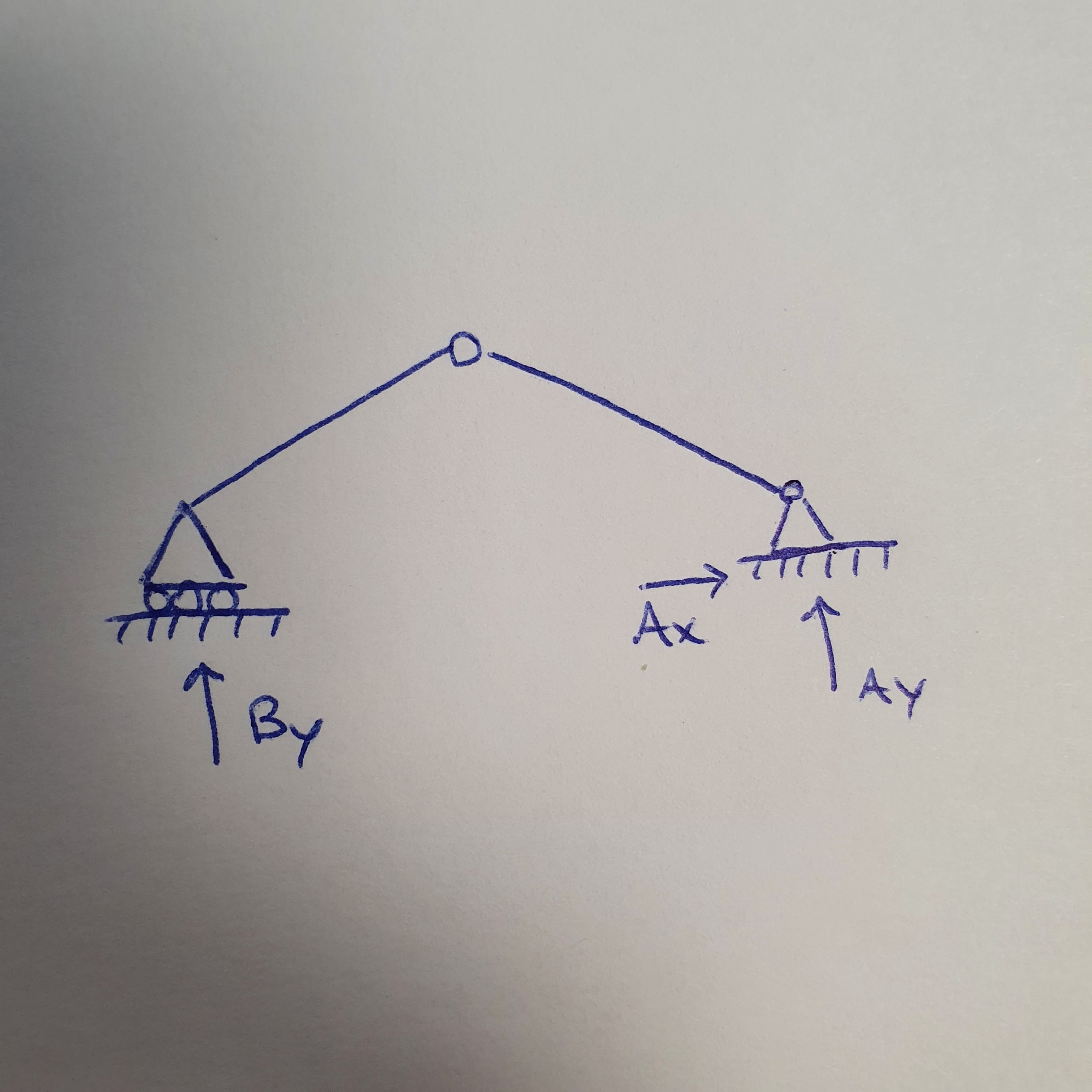 if you randomly put a moment at the center hinge, then the problem would still be indeterminate.

You would need to put a rotational constraint at the hinge point to make it stable. (I am not certain is 'statically determinate' would be an applicable term for this)

If you think about it, a support is just an applied force or moment, right? If you have a simply supported beam with a force $F$ in the midspan, the supports will be two forces, each $F/2$ in the opposite direction.

But then, what if, instead of supports, you simply had two forces $F/2$ applied at the ends? That'd be exactly the same, right?

The difference between supports and forces is that supports are "flexible": they generate the forces needed to keep a structure stable. An equivalent force is only valid for a specific loading case.

Basically, think in terms of order of operations: your structure suffers some loading configuration $q$, and then from those you calculate your supports. From a procedural perspective, supports are different from forces in that supports are a function of forces.

In your case, if you apply a bending moment at the hinge (it'd have to be on both sides of the hinge), then sure, you could make a balanced structure for a specific loading criteria. But you'd just be mimicking the behavior you'd get if you simply didn't have a hinge at all, and simply had a continuous (though bumpy) beam.

I add an alternative answer.

If you add a moment to the hing but your are willing to accept suspended configuration, it will be a determinat structure.

Consider the hinge at lower level than the supports, then apply the moment between the beams in a way that it wants to open them.

Let L, be the length of each beam and W its weight. And the angle between the beams a.

10
How to deal with a point force acting right on the hinge of a beam?
8
Moment equation from dynamics differs with equations from physics & statics. Where did I go wrong?
2
What is the significance of hinge in the internal structure of the beam?
0
Diagrams of forces and moments of a statically determinate structure
0
Equations of condition: why are two moment equations around a hinge dependent?