I am building a camper and one idea is to have an extra 4 solar panels as an awning bolted to a a rigid frame, hinged to the camper at the top. It hangs down the side of the camper. I will use one or two actuators to lift it to, say, a horizontal position. It will actually only hang down half way as it will be folded in half for travel, but the unfolding is not part of this problem, so it can be assumed to hang down unfolded as a rigid awning for this problem.

I want to figure out the size and power of the actuators I need. I could just guess and maybe get close or if not, just buy bigger ones through trial and error, but I'd like a sense of what I need here.

This is a class 3 lever problem, but with my limited physics background, I'm running into problems accounting for the change in angle against gravity as the awning is lifted. The work increases as the awning reaches 90 degrees (I think), so the most work is at the (corrected) END.

In addition, the location of the anchor point for the actuator is open. Though this may be determined by the distance the actuator can extend. For example, this is a 40" stroke, 400 lb capable actuator - https://amzn.to/3jSxIog. Would it work?

THE AWNING WEIGHS APPROXIMATELY 200 POUNDS (4 PANELS, 45 POUNDS EACH PLUS FRAME AND HARDWARE). IT IS 80 INCHES WIDE FROM THE HINGE (FULCRUM) TO THE OUTER EDGE.

BEFORE LIFTING - AT REST

Your diagram is not clear enough. As it is the actuator would not work because it's deadlocked.

There are many configurations of levers, links, and brackets to do the job, each with its own pros and cons.

I show a very basic bracket welded to the owning at 35 degrees.

Depending on the length of this bracket and the actuators play you can roughly calculate how much force you need. 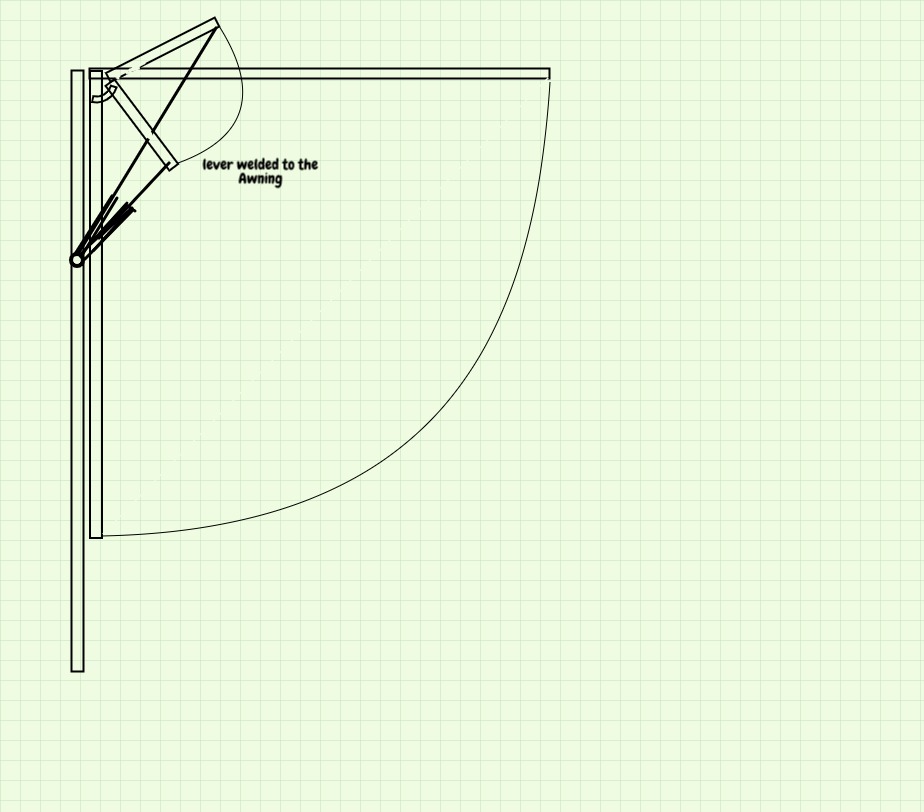 Afer comments as to alternative geometry.

As an alternative Let's assume the actuator is a bit offset from the deadlocked center to center.

After idealizing the model a bit, we can assume that the set up is like on the picture. 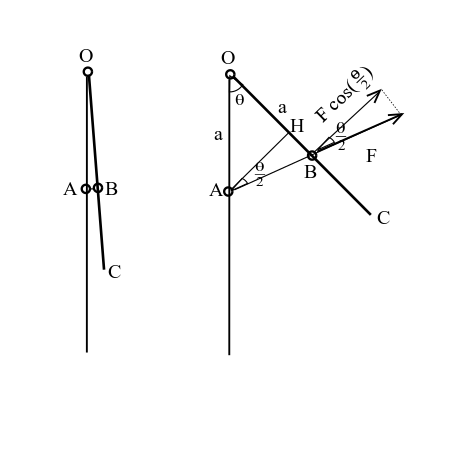 OP here. I found this answer as well:

Solving this, I get 400 lbs of force needed if the actuator is connected at 20 inches from the camper (fulcrum). To have some wiggle room I will connect it slightly further out, say 24 inches, thus requiring 333 lbs of force. The Amazon products that have 400 lbs of force will work. Likewise, I may have two actuators, so half that force needed for each.

The calculation of where to connect the actuator on the camper side and what length to buy I will have to do some trigonometry.

Assuming I connected the actuator at 55 down the camper side, the actuator must extend to approx. 60 inches and retract to just over 24 inches (to keep it offset from vertical), so an extension of 36 inches.

I will match the distance calculation with the products available. (EDIT: ...I WILL UPDATE WHEN I HAVE A SOLUTION)

Not the answer you're looking for? Browse other questions tagged mechanical-engineering mechanisms actuator or ask your own question.

2
Miniature electric or manual jacks?
1
Calculate the minimum motor power required to lift a human?
0
Finding the force in a cable of a rigid system
3
Sheet Metal Bending: stuck on calculating the minimum radius required
0
How to calculate the force required to lift this deck?
1
Usage of the three-sigma limits in calculating minimum force
0
Looking for feedback on a lift bed power lift mechanism
0
Find minimum horizontal force required to keep the block and wedge stationary?