Is there an upper limit to how fast a self balancing one wheeled vehicle can become while also being able to safely stop?

I've recently come across pictures of segway/hoverboard like self balancing motorcycle type vehicles that were supposedly able to become as fast as a street legal scooter. I kept wondering how they would do an emergency brake from top speed. If the wheel just blocked you would slam face down into the ground. So of course the vehicle had to try to lean the driver as far back as possible to use their weight for braking. But even then with enough speed and a subsequent brake my intuition tells me the driver would still just be lifted and slammed into the ground. I really just wondered if my intuition is right and the top speed these things can go is reached quite early or if I am mistaken because I'm missing the insights in how these things work physically.

As @fred_dot_u explains, there are stability limits for top speed and for the maximum braking based on the power of the device for a device that is stability controlled and electrically powered. (The same concepts work on a human-powered unicycle) But the speed of the device has nothing to do with the maximum braking. The device won't slow you down any faster if it is going fast; in fact, the relative braking will likely seem "slower" at high speeds because you cover more ground at high speed.

This is no different than a car, where top speed has nothing to do with brakes, but braking distance goes up greatly at high speeds. A stop from 100 kph should be 4 times the distance as one from 50 kph.

The Physics of Braking

In terms of a single axle vehicle, this is just a more extreme version of stopping a motorcycle. Blocking the front wheel of a motorcycle will either send the rider over the handlebars as the bike flips, or the front wheel will skid and you will crash from loss of balance and control. So we won't do that. The ground hurts (trust me on this).

For a single axle, the maximum braking we can achieve will be related to how far above the axle the center of gravity is. If it is above the axle, physics requires the rider to be leaned back. There is no rear wheel to provide a backstop so control is essential. That said, on a motorcycle, the absolute fastest braking will be with the rear wheel coming slightly off the ground. Watch a MotoGP race and you will see this.

We can do a lot of heavy math on bikes/motorcycles, like at Moto Dynamics. The math required for this though is basic trigonometry and a little knowledge of free body diagrams. Suffice it to say that during braking, gravity has to balance the forces that would tip the bike over its front wheels. The force of gravity through the center of gravity (CG) times its horizontal distance from the front tire patch needs to not be less than the force of deceleration times the vertical distance of CG from the ground. 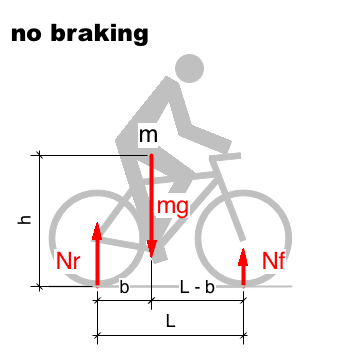 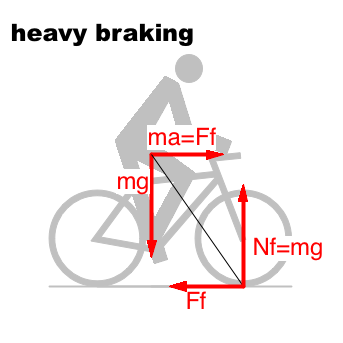 or over the handlebars we go.

Going to a single axle vehicle is pretty much like doing a stoppie on a bike. There are some great answers about this Here, SE Physics. We then need to do the same thing except there is no rear wheel, only the rider. If you pretend the motorcycle is now just the rider, the equations are the same, just harder to execute in the real world. We need to be leaned back enough so that the downward force of gravity times its distance. The same equation as above applies, but consider the diagonal line from ground to CG to be the rider leaning back.

The maximum braking we can achieve is

is the coefficient of friction, let's say 0.8. So as long as we can lean back so that the equations all work (we can with super software or skilled reflexes) we can stop a single axis vehicle at maximum deceleration from any speed.

The angle from vertical (θ) required for max braking will be:

We will name the diagonal as CG, the height to the person's center of gravity

And there you have it.

As an owner of an Airwheel S8™ self balancing scooter (with a seat) that operates similarly to a Segway™, I can offer insight and my own experience. 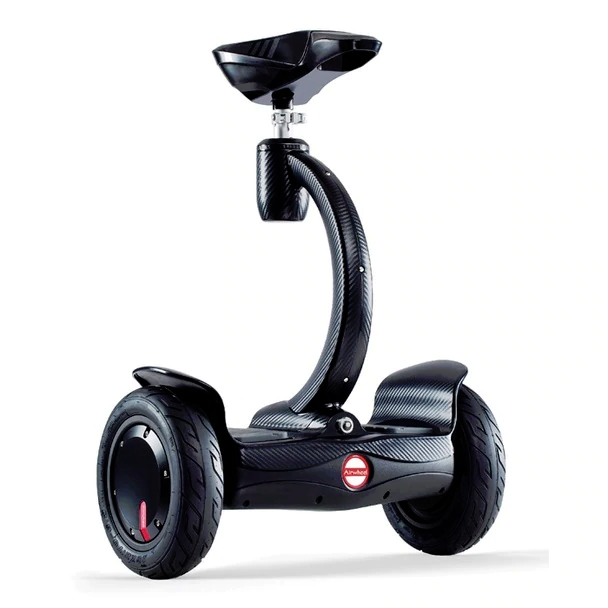 There is an upper limit, which is primarily based on the maximum power available to be transmitted to the wheels. When in a "stopped" attitude, some motion is required to keep the primary mass (operator) over the pivot point, akin to balancing a broom on one's finger. It's a fairly small amount, perhaps a centimeter or two, depending on the operator's skill and poise. As a layman, I call this a zero reference.

As one leans forward, the computer circuitry, including accelerometers and inclinometers cause the wheels to move under the operator, attempting to maintain a correct zero reference, which is adjusted for the motion.

As the operator further leans forward, additional power is required to keep the wheels under the pivot. Eventually, there is insufficient power and the device declines to continue. Inertia usually results in the operator continuing to continue.

I taught myself to ride a unicycle in my mid-forties and it was presented in the book I used that one exercised the same principle. Lean forward, pedal under the lean, stay upright.

Later, a self-balancing electric unicycle provided less exercise but no change in the concept. The Focus Designs SBU taught me much about road irregularities as described in the question.

If one is advancing at a speed close to the maximum permitted by available power, computing speed and surface conditions and then contacts a bump, there is not enough reserve to maintain the zero point and the device dumps the rider. On the SBU, that was just about 15 mph / 24 kph and frequently resulted in painful ground contact.

The braking action of this type of device is initiated by a rearward lean. The computers detect this change which is aft of the pivot point and begin to reduce power at a speed appropriate for the magnitude of the lean. If one leans aft at an excessive rate, and the device is unable to compensate quickly enough, one separates from the device in an uncontrolled manner. The SBU would effectively shut down, resulting in a severe dump. It is easy to generate an excessive lean-back on the unicycle, not so easily accomplished on the Airwheel S8. This means that braking with the S8 has to be managed well in advance. Too much speed, not enough braking is a bad combination.

In one incident with the SBU, tree shadows on the sidewalk matched precisely the angle of a large diameter conduit or piping on a construction site. The pipe was perhaps 3 to 4 inches (75 to 100 mm) and was hit nearly square on. The SBU hopped over it but the forces required to maintain balance were outside of the parameters of the controller. There may have been watts/volts/amps, but the controller speed was insufficient to keep me balanced.

In the case of the Airwheel S8, I'm able to navigate slightly worse surface irregularities without incident (frequent travels over same path to grocery store). I believe there is a slightly higher safety factor programmed into the controller. It may also be that in most of these circumstances, only one wheel is affected at at time and the other wheel provides additional balance stability.

There are other devices without seats, such as the "hoverboards" and monowheel designs, along with the stand-up Segway type transporters. Without seats, the pivot point is lower and provides less stability, as the primary mass (human being) is less easily controlled in circumstances of surface discontinuities. This is informed conjecture based on my experiences with the SBU and the S8. 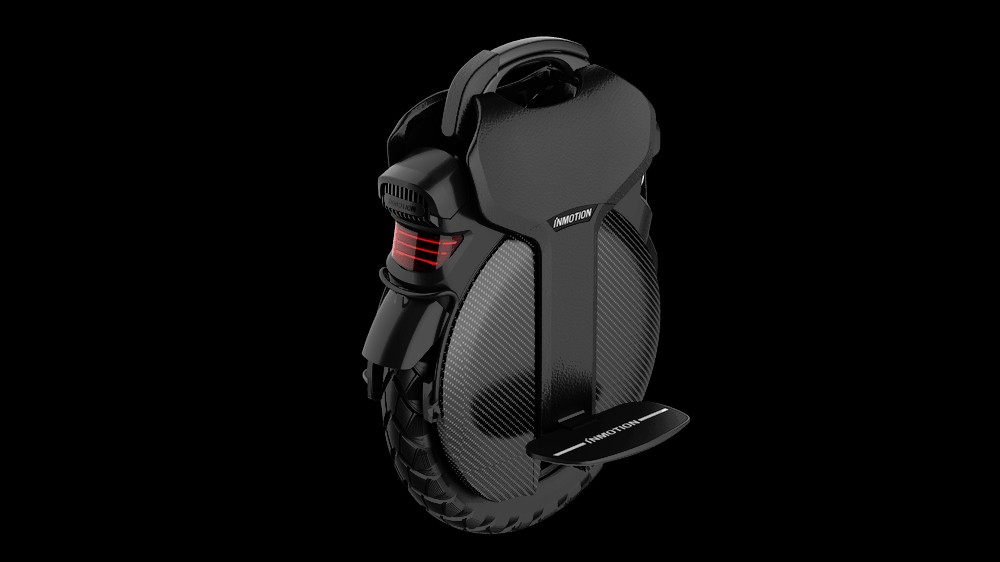 Image above from Freemotion, a representative dealer for these devices.

There's a video of a modified monowheel design traveling at speeds in excess of 30 mph / 48 kph. The operator loses stability but it's not certain of the cause. A road crack or pothole at that speed would be able to destabilize the vehicle, as the speed again reaches the maximum technically capable balance level and no surplus is available to "get under" the pivot.

At the 10 mph / 16 kph top speed of my S8, I'm satisfied that I am in no danger. The three unplanned dismounts resulted in only one fall, onto wonderfully soft turf. It was caused by approaching an elevation change on the sidewalk, which was handled just fine by the computer on the uphill side, but the operator did not compensate at the top for the approaching decline. Elevation change was perhaps 12 inches / 30 cm over about a yard / meter at maximum speed.

When operating a self-balancing anything, it's a good idea to stay within the range of the device and slow down in the rough stuff!

There is no hard limit to the top speed of a self balancing vehicle.

Imagine the vehicle's drive system has unlimited torque and speed, and is operating in a vacuum (no drag). Starting from a balance, the vehicle can tilt slightly forward and will begin accelerating. With no drag, or speed limit on the drive system it will accelerate continuously and can reach arbitrarily high speeds. To stop, it simply has to tilt slightly backwards and repeat the process in reverse.

Practically speaking though, as Tiger Guy said, the drive system will be the limit, and not one of these physics class type hypotheticals.

Not the answer you're looking for? Browse other questions tagged electric-vehicles or ask your own question.