Moment of a force in 3D

The question is not to help me get my task completed. There is the 3D statics problem that I have been attempting to solve for a long time. I have no help, hence I would like to pose you a few questions to ensure I am on the right road to end the task.

Some translations: silinder means cylinder (a kinematic pair - joint); sein is wall, and ramp stands for ramp in English. A white sphere is a vehicle, whose mass is defined as a force $F_v$ - the cylinder has it, but we neglect it, because $G_s \ll G_r $ and $G_s \ll G_v$, so we set it to be nearly equal to zero.

The task is to determine reactions at A and C.

Proposal 1. We can reduce the system to the point $A$ by determining the main vector and moment. Setting them to zero, we acquire equations.
Proposal 2. I tried to bring the problem to the one which I know how to solve; in other words, I know how to solve 2D beams, why not consider the problem as a complex one. That is, I wish to consider the planes $xy$, $xz$ and $yz$ separately. On which plain, I can compute moments through points. For that, I project all forces onto the planes and consider the equilibrium of each part. This might be of help to construct diagrams of bending moments in 3D beams - this is my conjecture.


For those, who are interested in the task: On the picture, the lifting, inclined ramp with the braking vehicle is depicted. We assume that action is with the emergency load situation, where there is one lifting cylinder and one pivot (hinge) is broken. The vehicle weighs about 2.5 tons and we assume that while it is braking, the force $F_v$ become maximum $F_h = 0.3 \cdot F_v$. Ramp itself weighs10 tons and cylinder weight can be neglected. Determine reactions at the points $A$ and $B$. The width of the ramp is $b$ and the length of it is $l$. Hing $A$ and cylinder attachment $B$ are at the distance $b/2$ from the mid axis (centroid axis). The angle between ramp and cylinder is $\beta$. We also assume that the vehicle is at the distance $b/4$ from the centroid axis and at the distance $3l/4$ from the wall. At both Cylinder's ends on spherical pivot joints. 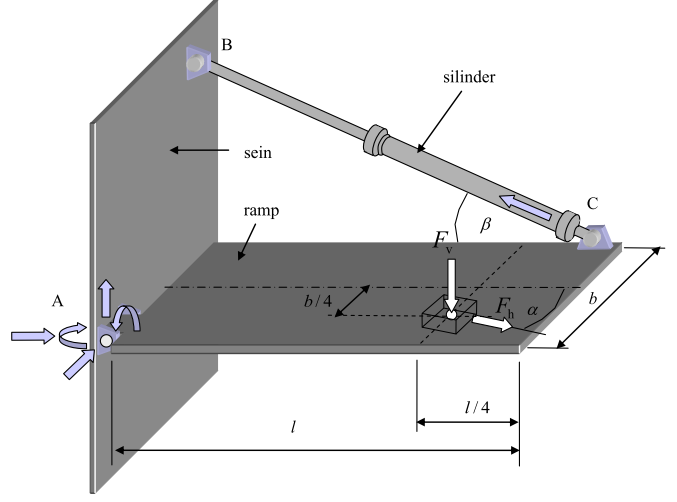 Browse other questions tagged statics torque or ask your own question.

3
Why is there a moment at the cross section end when you cut a body?
2
Drawing Bending Moment Diagrams
2
Static equilibrium and moment
0
Second Moment of Area for slanted triangle?
1
The internal normal force, shear force and moment
1
Is there a moment at a point between two connected sliders, when one is subjected to a force? (schematic shown)
1
Statics Two Force Member Problem