Mechanism for indicating the direction of a shaft's rotation

I have a shaft, which will change its direction of rotation somewhat randomly in response to external disturbances, without a ton of speed/torque. I need to figure out a mechanism I can use to actuate something like a pin up/down a short distance depending on the rotation direction of the shaft, or other bi-positional indication of the direction. This will be used to mechanically actuate a clutch elsewhere in the mechanism.

Sprag bearings seem like a nice starting point for this, I can get a disk or gear to rotate/not rotate depending on the direction, with little/no backlash, which is important -- this needs to trigger within a few degrees of the direction shift. However, how would I convert this rotation/non rotation into something I can use as a mechanical on/off indicator like this?

I can also come up with several ideas that involve the mechanism continuously fighting against a friction clutch, but would prefer not to have this source of inefficiency.

Sounds like you want the same mechanism that is used in a ratcheting socket wrench1: Similar to a sprag bearing, it is made from a gear with very small, triangular teeth and a set of teeth that interacts with the gear, either locking the two together or allowing rotation depending on the geometry. With a lever or button, the second set of teeth is rotated in such a way, that it is only engaging in one rotational direction while the other rotates with the ratchet getting pushed aside.

Now, how to translate the rotation into linear motion? Actually, you don't. It might be best to only convert the torque that creates the rotation into linear motion by mounting a lever to the ratcheting socket or sprag bearing. When the rotation is in the engaging way, the part turns and pushes on the gear, but when rotating the other way round and the clutch does not engage, a spring resets the mechanism and the shaft spins freely. This however has an obvious downside: the shaft does no longer rotate freely but only into the no-engagement direction. If the full rotation of the shaft in both ways is crucial, the mechanism needs to be connected via some way of friction connection.

1 - The first US patent for the socket wrench mechanism I could find is from 1933 and it has been used in at least 51 variations thereof since then.

Maybe it could be done by using the rotational direction, but at the cost of delay. Think of a wheel set up with magnets sliding out on rotation in the one direction and sliding in on the other or on no rotation. This, mounted in a spool, becomes a generator, and the electric signal produced is proportional to the rotational speed in the one direction - or 0 on no rotation or wrong way rotation. The signal in turn could be used to trigger an electromagnetic linear actuator, which in turn works the mechanism. If the rotation of the shaft is not relevant in any way, just fix the magnets on the outside.

Since I already drew this on a piece of paper, I decided to share it, in case you find something useful. Basically, you attach two ratchet cogs on the shaft, one under the other, so that the upper one locks to the rotation of the shaft when the shaft spins counter-clockwise, and the lower one locks to the rotation of the shaft when the shaft spins clockwise (kind of like the cogs of a bicycle or those ratchet wrenches that were mentioned already). Then you have these two additional (regular) cogs, cog 1 spun by upper ratchet cog and cog 2 spun by the lower ratchet cog. The non-interacting ends of cogs 1 and 2 end up in the same plane. The weird stopper on the third picture is in order to restrict the inertial motion of the bar, because since one cog is locked to the rotaion of the shaft, the other is free and can gain extra angular momentum from the movemnt of the bar. All these things of course could be modified to make this more stable, I just drew the overall principle. 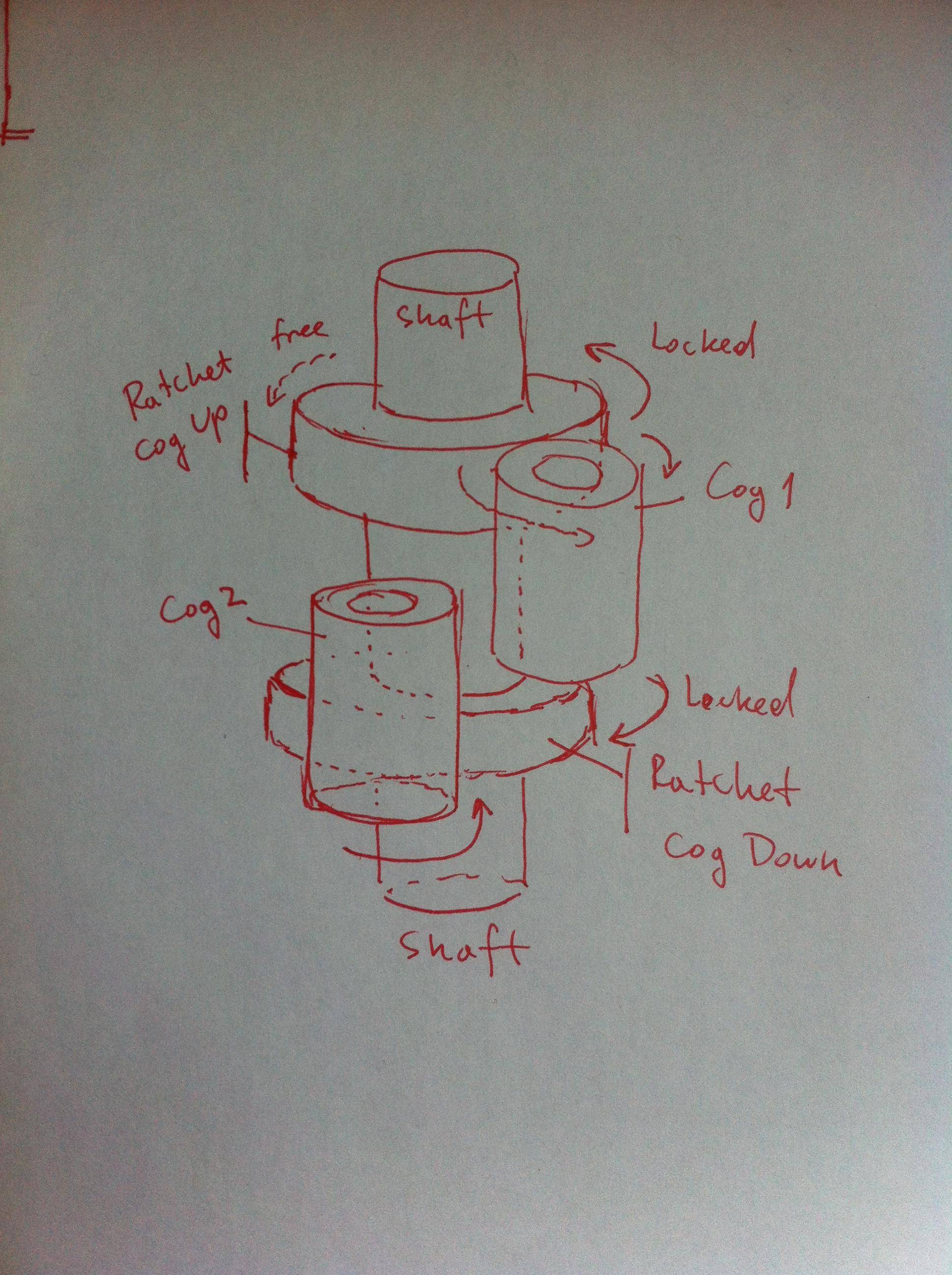 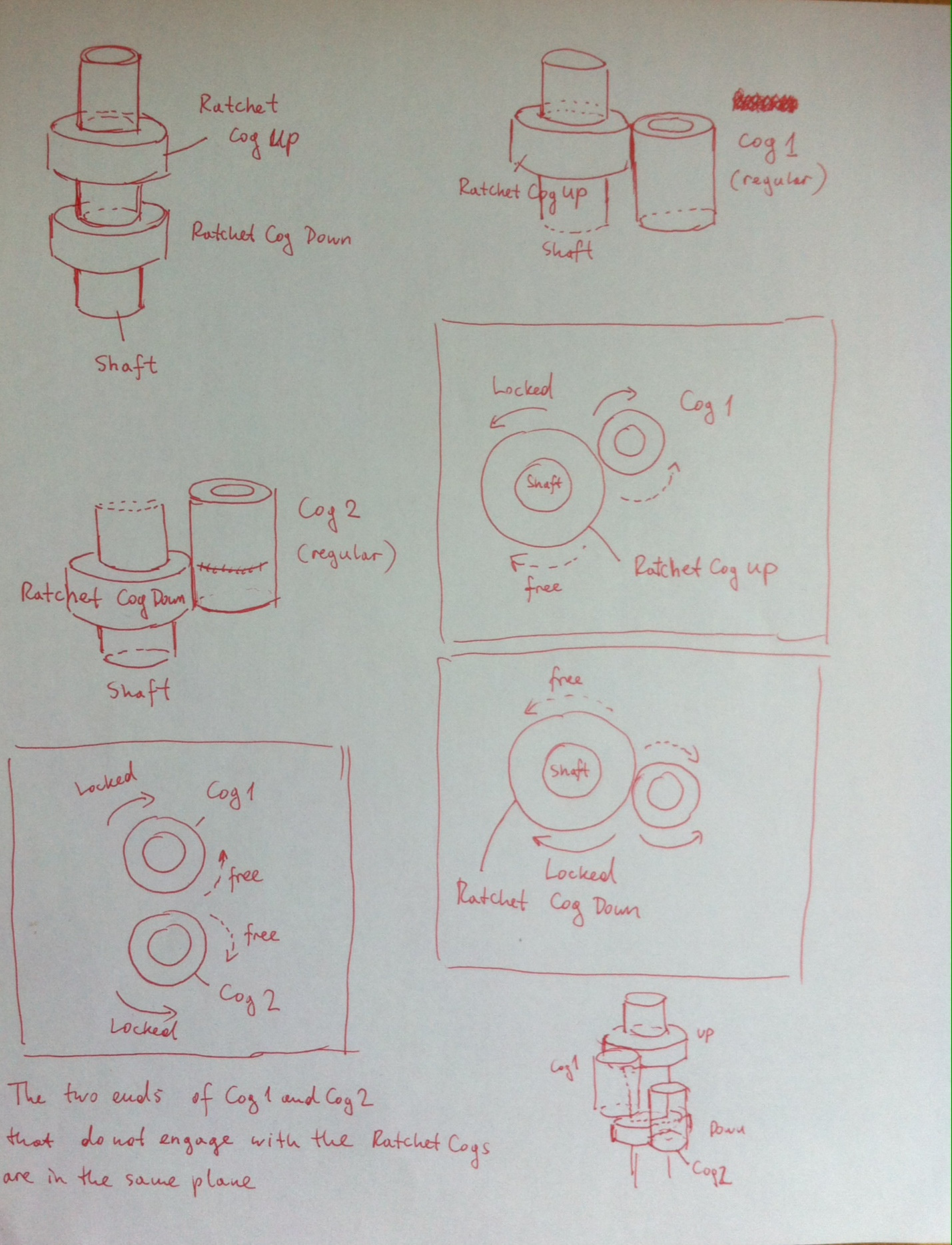 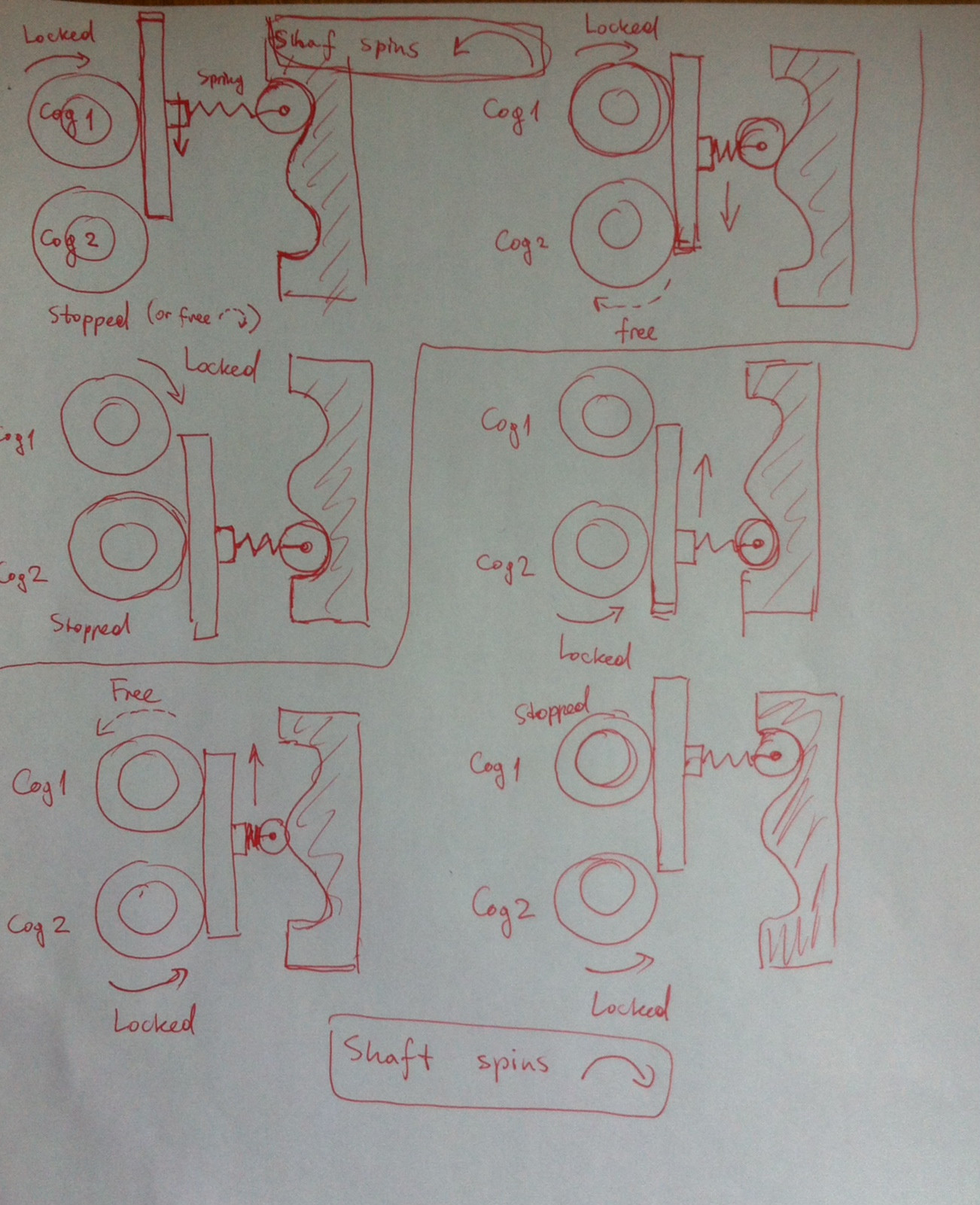 Previous attempt: I could suggest this: 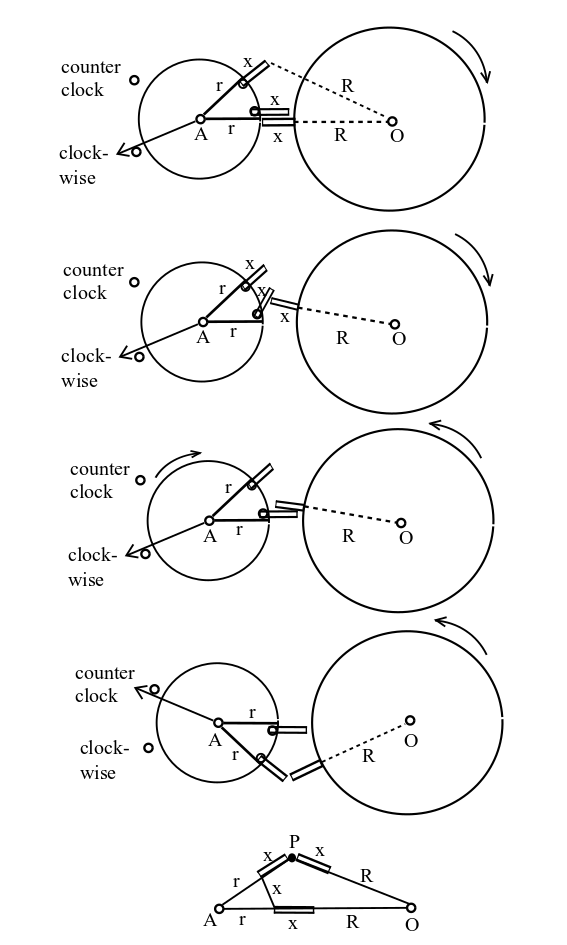 I don't know if it helps you. You have three main parameters to consider: the radius of the shaft $R$, the radius of the disc on the left $r$, the two teeth (or levers?) attached to the disc on the left of length $x$, both folding in only one direction, the fixed tooth on the shaft of length $x$. I drew only one fixed tooth on the shaft, but one can add several, in order to capture rotations that may not complete one full turn. I guess it depends on the sensitivity, what amplitude of a rotation you want to capture. There is a condition on these parameters, i.e. they have to satisfy some inequality to make sure the teeth attached to the disc on the left can fold enough so that they do not interact with each other. Now, if you, for example, pick the parameters so that they satisfy a specific geometric equation that I can propose, then I think the mechanism should work (from geometric restriction point of view). The triangle $AOP$ at the bottom of the picture should have edge-lengths satisfying the law of cosines with respect to angle $\angle \, OAP = \alpha$: $$(R+x)^2 = (R+r+x)^2 + (r+x)^2 - 2 (R+r+x) (r+x)\cos(\alpha)$$ Next, if you pick the geometry of $AOP$ so that the smaller isosceles triangle on the left so that its edge-lengths are $r,\, r, \, x$ and angle $\alpha$, then:
$$x^2 = 2\,r^2 - 2\, r^2 \cos(\alpha)$$ If you solve the second equation for $\cos(\alpha)$ and plug the expression into the first one, you get the equation $$(R+x)^2 = (R+r+x)^2 + (r+x)^2 - 2(R+r+x) (r+x) \, \frac{2r^2 - x^2}{2r^2}$$ or if you multiply by $r^2$ both sides of the equation: $$r^2(R+x)^2 = r^2(R+r+x)^2 + r^2(r+x)^2 - (R+r+x) (r+x) (2r^2 - x^2)$$ So I think that if you solve this numerically for either $x$, if you have $r$ predetermined, or for $r$ if $x$ is predetermined, it looks like this will make that the mechanism work. Of course, this is one possible quick suggestion, one could try to analyze the geometry a bit more carefully, for a more optimal solution. But maybe it is not necessary.

Old stuff. As a starting point, I can suggest something like this: 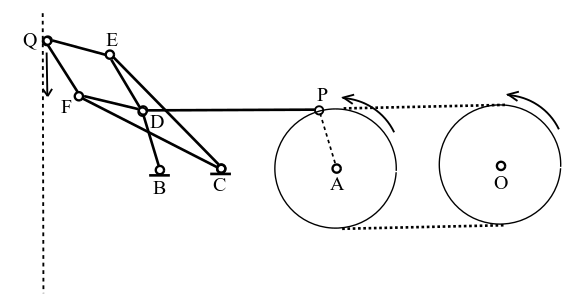 We are in a plane perpendicular to your rotating shaft. The intersection of the shaft with the perpendicular plane of the picture is the circle with center $O$ on the right, where $O$ is the point of intersection of the shaft's axis of rotation and the plane. Assume we can place a belt on the shaft that can transfer the rotation onto a planar disc (or cog?), depicted on the picture as the left circle with center $A$. Assume you have attached some kind of a joint firmly to the left disc at point $P$, so $P$ rotates with the disc, driven by the rotation of the shaft, and $|AP|=R$ is the radius of the disc on the left.

The mechanism $CDEFQ$ is constructed so that point $D$ moves along a circle of radius $R = |AP|$, centered at $B$ and passing through the point $C$. At the same time, the mechanism performs geometric inversion with respect to the circle centered at point $C$ and having radius $|CE|^2 - |ED|^2$, so that point $D$ is mapped to point $Q$. Since point $D$ moves along a circle that passes through the center $C$, the inverse image $Q$ of point $D$ must move along a straight line, which is the dashed vertical line drawn on the picture.

Not the answer you're looking for? Browse other questions tagged mechanisms or ask your own question.

0
Shaft to swap direction of rotation
3
Mechanism to translate rotation into reciprocating horizontal movement
1
Rotary to linear motion - how to make upside down “hammer” mechanism?
1
Bevel gear design & usage
3
What mechanism do I use for this pen-like design?
0
0..360 constrained rotation mechanism
2
Is there a way to convert a short throw in one direction into a long throw in two directions
3
Rotation around an axis outside of the mechanism