Steel seems to be a very complex material, not least because of the different phases and microstructures. At the moment, I'm especially interested in the bainite formation that happens when austenitic steel is cooled rapidly (but not rapidly enough to drive the martensite formation).

My question: What is the mass density (or range of values, or functions describing the densities in relation to specific conditions) of these two microstructures?

There is a lot more going on in this question than appears at first glance. Density of austenite is fairly straightforward: it is approximately the atom-weighted sum of the face-centered cubic densities of the substitutional constituents as the microstructure consists of a single phase. In other words, Fe, Mo, V, etc. The interstitial constituents, i.e. C, N, add mass as they do not replace Fe lattice sites but instead fit between them, increasing mass without increasing volume, therefore increasing density. However in austenite there is at most 2% by weight of carbon in solution at $1130\:\textrm{C}$ as shown in the phase diagram at the bottom. The density of pure iron is $7870\:\textrm{kg}/\textrm{m}^3$ (from Google), and the density increase is probably close to about 2% of the density of graphite, $2250\:\textrm{kg}/\textrm{m}^3$ (from Google), or about $45\:\textrm{kg}/\textrm{m}^3$, for a total of about $7915\:\textrm{kg}/\textrm{m}^3$ for the density of fully saturated austenite at room temperature. It isn't clear how you would produce such an unstable material, but we can at least estimate in theory. There are slight volume changes in the FCC lattice caused by the substitutional and interstitial atoms, but without atomistic models these changes are challenging to predict. They may be determined experimentally, of course.

For bainite, there are two phases: ferrite and cementite. The ferrite phase consists of virtually all of the substitutional microconstituents in a body-centered cubic structure, so its density may be calculated by atom-weighted average. There is also a trivial quantity of carbon in solution at equilibrium, increasing density as before. The density of the microstructure is then the volume-weighted average of the densities of the two phases. Plain-carbon steel with no other alloying additions should have ferrite density very close to that of pure iron, or about $7870\:\textrm{kg}/\textrm{m}^3$ (from Google), and cementite has a theoretical density of approximately $7640\:\textrm{kg}/\textrm{m}^3$ (source). For steels the maximum amount of cementite is approximately 32% by volume, from a tie-line construction on the phase diagram. The maximum carbon concentration in a steel, by definition, is close to 2.14 weight percent, whereas in cementite is 6.67 weight percent. So the volume-weighted density would be a minimum of approximately $7795\:\textrm{kg}/\textrm{m}^3$.

These numbers may be adjusted for temperature using coefficients of linear expansion cubed for the volume change (assuming linearity). They may also be adjusted by considering the densities of substitutional alloy additions. Finally I would caution that the numbers are theoretical for austenite, as plain-carbon steel, pure, retained austenite should be practically impossible to produce in bulk. I'd also caution that there are more complex phenomena to consider such as phase changes, diffusion, as well as other thermodynamic and kinetic phenomena that govern how steels form microstructures and phases, and which will definitely have an effect on the densities. 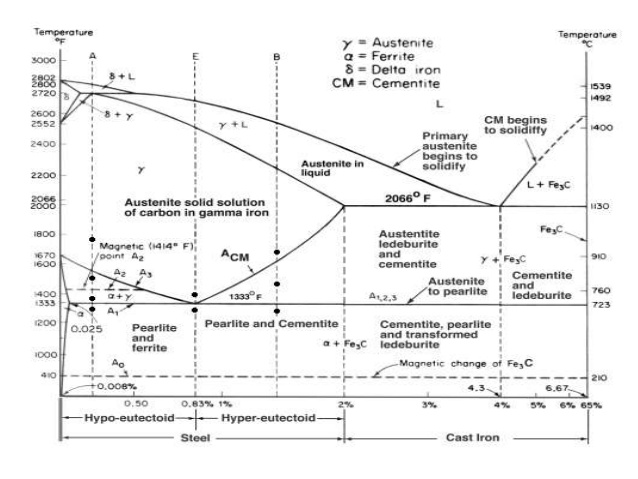 Not the answer you're looking for? Browse other questions tagged materials steel metallurgy or ask your own question.

11
What does the steel grade "11SMn30" mean?
8
What bolts should I specify with Weathering Steel?
14
Is stainless steel plating possible?
7
Special Considerations for Steel Plate Marketed for Laser Cutting
4
Use of 410 Stainless Steel for replacement of 420 Stainless Steel
12
Is steel relaxation plastic?
4
Weathering steel?
2
Tempering 1095 steel
1
What is the effect of Aluminium nitriding in steel?
1
Outline of Various Heat Treatment Processes