Disclaimer: I’m not trying to violate the conservation of energy here; I know that’s impossible for us mortals. I think I’m either wrong or not considering something, I just want someone to point it out in as nice a way as possible so I can learn from my mistake.

So, my question originally started when I learned that as wind velocity doubles, power is cubed as given by:

Whilst considering this I found the notion a little difficult to grasp, my conclusion to begin with was that if velocity doubles so does the energy. I know this is connected and explained by newtons second law of motion but I don’t necessarily have a comprehensive understanding of that although I accept it as fact.

My trouble really started when I began to consider funnels, So, in a funnel, if the inlet is twice the area of the outlet and the air velocity is 5 knots at the inlet, then the outlets air velocity should be 10 knots. I checked that… and I’m 99% certain that’s correct.

Then I figured if I generated power without a funnel with a turbine, I would get a portion of that power, according to Betz limit no more then 59.3% of the kinetic energy. However, if I funnelled that air, I wondered could I get more power without violating Betz limit. By my (very possibly incorrect) calculations you can and a lot more.

I got the formula for calculating wind power from turbines from here: https://www.raeng.org.uk/publications/other/23-wind-turbine

If this math is correct (I have my doubts), funnelling a given air flow at 10m/s, the inlet 10 metres squared and the outlet 1 metre squared you can increase your power yield by 100 times. This sounds very wrong. I’m almost sure this is wrong.

To conclude my confusion, If the air speed is 10 m/s and you have three turbines in an enclosed space with one turbine active at a time.

So, I know on this website you like for users to show how they’ve tried to work through homework like questions before asking questions some might consider to be silly. I did my best. I googled the advantages and disadvantages of ducted wind turbines and found some interesting articles about systems like the Invelox turbine. 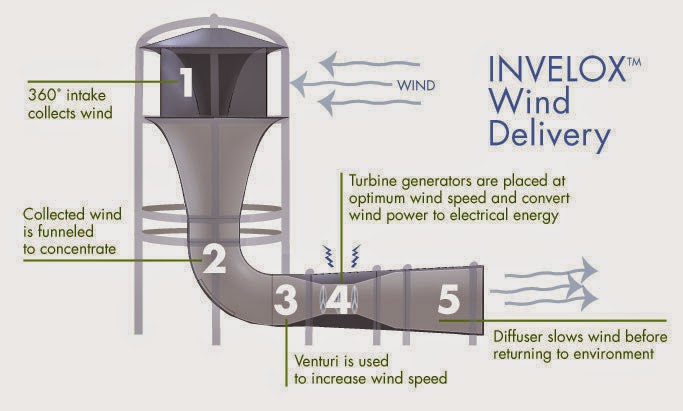 The inventors claimed there were significant advantages to using ducted wind turbines especially in areas with low windspeed but the overall consensus was that the cost of per unit power was too high to give these systems a significant hold over the conventional wind turbine.

This made me wonder if my math was actually correct, these systems were better they just weren’t better from an economic stand point. Given that my math told me these systems could be 100 times more powerful. I scrapped that idea pretty fast.

My next point of call was Bernoulli’s equation, which makes the observation that as fluid velocity increases in a funnel, pressure decreases, however I know these pressure decreases can be very insignificant when dealing with a fluid like air and applies much more appropriately to water which has 1000 times the density of air. So, I don’t think its that either.

My next thought was perhaps the skin friction in funnel was so significant that it robbed the wind of its power at an ever-increasing rate as it travelled further into the funnel. I know from other things I’ve done that the friction losses in funnels aren’t that bad when it comes to air, I’m referring to Ansys fluent simulations with funnels.

Perhaps my understanding of the relationship between power and energy is incorrect. In my mind this understanding would violate the conservation of energy because the same air flow is yielding 100 times the joules per second which sounds impossible.

I’m really at a loss at this point, my best guess is that my calculations are simply incorrect or taken out of context or perhaps air struggles to enter the proposed funnel for some reason I don’t understand. Hopefully someone can explain this to me because I’m determined to exit this rabbit hole somewhat enlightened.

Browse other questions tagged mechanical-engineering fluid-mechanics applied-mechanics turbines or ask your own question.

6
efficiency and flow separation
4
How many blades for a steam turbine?
4
Why does my model of a wind turbine show high RPM with low power output?
2
Does this exist - Water flow control with energy recovery
2
Estimating wind velocity behind a wind turbine
0
How to calculate airflow in m3/min on a gas turbine outlet?
1
What is the purpose of combustor in a gas turbine