In structural engineering we have to accept the fact that you can never be exactly sure how much load a structural member can resist, that the load carrying capability of an element is not one exact value but distributed with some probability distribution function (quality of laid concrete, for example, is quite dependent on many conditions on the worksite, such as the workers skill, etc.). The same goes for structural loads. Therefore we cannot say with absolute certainty whether some structural is stable, we can only calculate certain probabilities.

The actual probability of failure can be calculated as follows, according to Wikipedia:

Like mentioned by @mart above, I believe there is something wrong with the curve of $F_R(s)$. The text states cumulative function so it should have been something like. 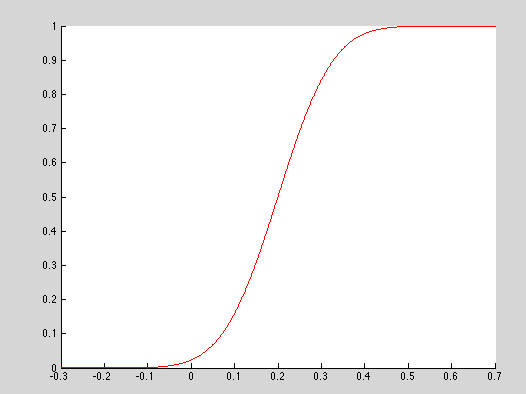 The way I would explain the Probability of failure is the following. There is failure if the load is greater (S) than the structural resistance capacity (R). So you want to iterate over all possible loads (thus the probability density of a load s).

Since the two probabilities (A: load at S), (B: resistance R is less or equal to load S) are statistically independent, their probability of occuring simultaneously is given by:

Then all you need to do is integrate over the entire range of $s$. That gets you:

TL;DR I think the Wikipedia entry is incorrect and confuses.

Suppose the resistance capacity has a probability density function between 1kN and 2kN and is 0 everywhere else.

What happens if you apply a load of 1,000kN? Answer: the structure is guaranteed to fail.

IF you use the probability density for the resistance instead of the cumulative density, you are saying that the structure might fail for loads between 1kN and 2kN, but it will not fail for any load greater than 2kN, which is obviously wrong.