How to compute heat produced by 2.5kw heating element

Lets say the following is limited to 2.5 kW only and the thermostat and flow switch failed during use. After water is boiled away and bit of steam released. What would happen to the heating element inside? Can it just stay inside getting hot like a lamp? How do you compute the heat of the 2.5 kW heating element? 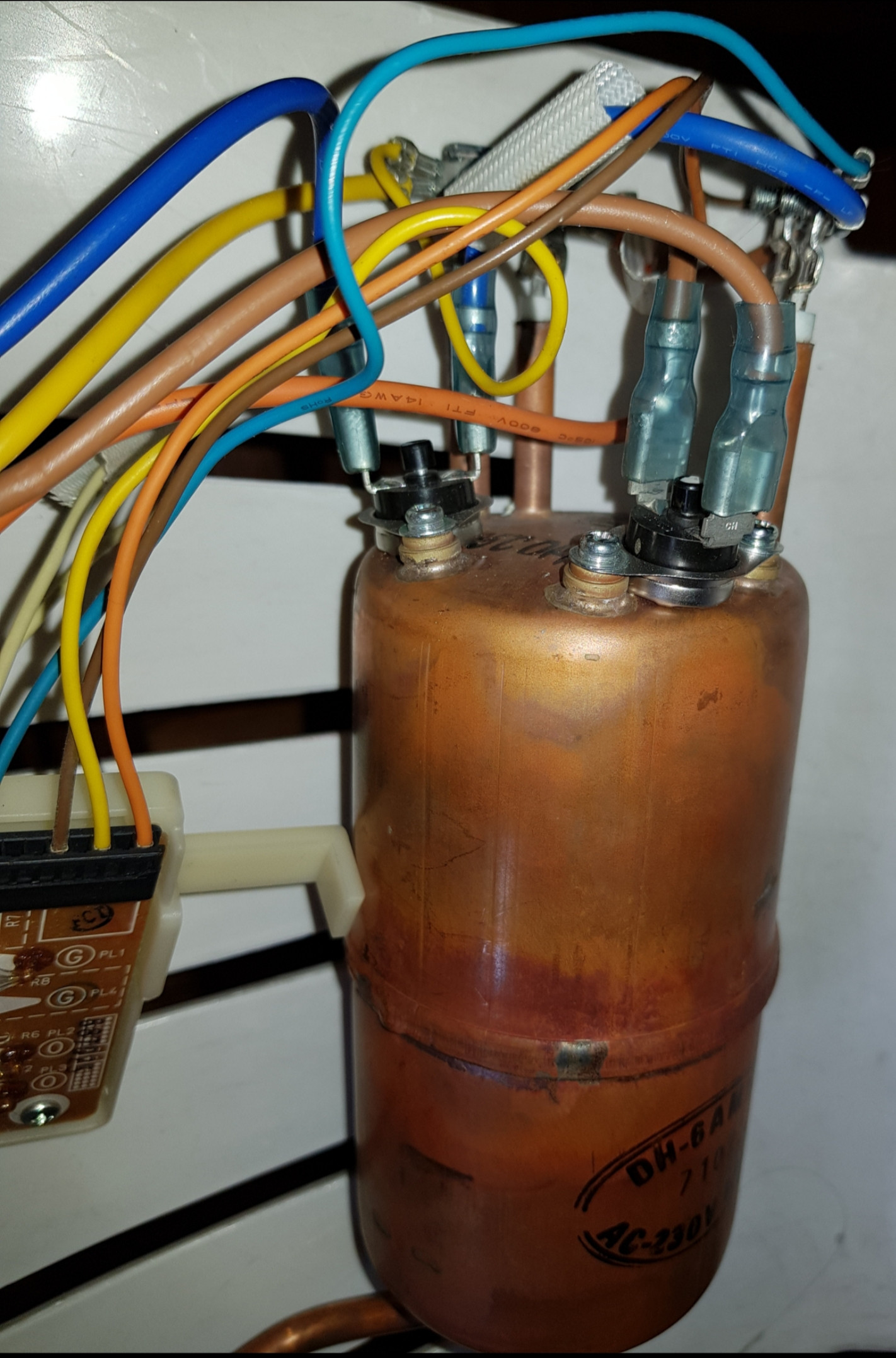 Regarding the question title,

How to compute heat produced by 2.5 kW heating element.

That's easy. The heat generated will be 2.5 kW. For temperature generated see below.

After water is boiled away and bit of steam released.

What would happen to the heating element inside? Can it just stay inside getting hot like a lamp? How do you compute the heat of the 2.5 kW heating element?

The temperature will stabilise when power lost to the environment = electrical power in. There is no eay way to calculate this.

In general either the element will burn out or the insulation would break down and short the supply to the earthed element casing. The protective circuit breaker would then trip.

Does the copper melt? Possibly, we can't be sure. Assuming 0.25m² of surface for the vessel, this formula for radiative heat transfer and an emissivity of 0.03, at 1068°C (melting point of copper) the vessel radiates about 1.4 kW, less then the 2.5kW input. So ignoring convective heat transfer, it would reach a high enough temperature.

Actually, things will probably go as per Transistors answer. Don't try this at home.

then you can assume that the boiler once it gets to thermal stability will "lose" 2.5[kW] of power. The losses will be a) convective, b) radiative and c) conductive.

In general this could be neglected.

In general this could be neglected, because the surface area of the boiler is much greater than the brackets.

You can substitute for your problem and obtain a ball park figure.

0
How do you quickly heat cold water?
4
If I need a very small heat engine, should I consider external combustion?
1
Heat Transfer From Resistance Element to Metal Component
0
How can I determine pressure inside contained cylinder when heat is added?
4
Winding a wire heating element after a few uses
2
How to calculate the required energy to heat water at high pressure?
2
Why not drive an air source heat pump domestic heating system with an auto engine?
0
Wire heating and heat transfer in a cylindrical pattern
0
Thermodynamics - heat exchanger