At work we've had a steel pipe support break on us, and I can't for the life of me figure out what happened. Here's some background info:

A long (125m) steel heating pipe (ø51mm) is suspended, resting on 27 identical supports over its total length. The very last support fixes the pipe in place there (to prevent it from expanding through a wall), but it is free to move in all the other ones.

This 27th support is the one that broke, and my best guess is that it might have had something to do with the sum of the frictional forces of the 26 other supports being greater than the force required to bend/break the 27th support.

The pipe is heated (from 20 to 90 °C) and expands as a result. A quick google yielded me the following equation for thermal expansion of a steel pipe:

Assuming the pipe is fixed on one end, the force of thermal expansion would be 117 Mega Newtons, which to me pretty much just means there's absolutely no stopping the expansion.

Now comes the part I'm confused about. The pipe is supported by 26 equally spaced supports, through which it is 'free' to move. I say 'free', because I assume it needs to beat static friction first.

The formula for static friction I found was as follows:

I found a value for the static friction coefficient μ being 0.75 for steel-on-steel, but this seemed to vary a lot depending on where I looked. The mass of the pipe is approximately 4.57kg/m, so about 570kg in total. The acceleration in this case is equal to g, so 9.81 m/s2. Interestingly, friction is contact area independent.

Am I correct in assuming this means the total friction force experienced by the pipe when heating up is 4200N? And that the fixed end of the pipe would have to be strong enough to resist that force in order for it to expand only in the other direction?

The next part of my question is, how can I calculate what the maximum amount of force on that 27th steel plate can be before it bends/breaks? I can calculate that the torque on the steel plate at the pipe's location is 4200N * 50mm = 210 Nm, but that doesn't really mean anything to me, nor do I know if that's even remotely close to the truth. All steel involved is s235 structural steel.

Either way, I don't think it broke because of the friction force, but rather because it was mistakenly also fixed somewhere else. The thermal expansion force is more than strong enough to break steel if it has to, so that seems more likely to me.

If anyone has any idea how to tackle this problem, help would be greatly appreciated!

Edit: As a requested clarification, here's a simple isometric sketch of the situation. 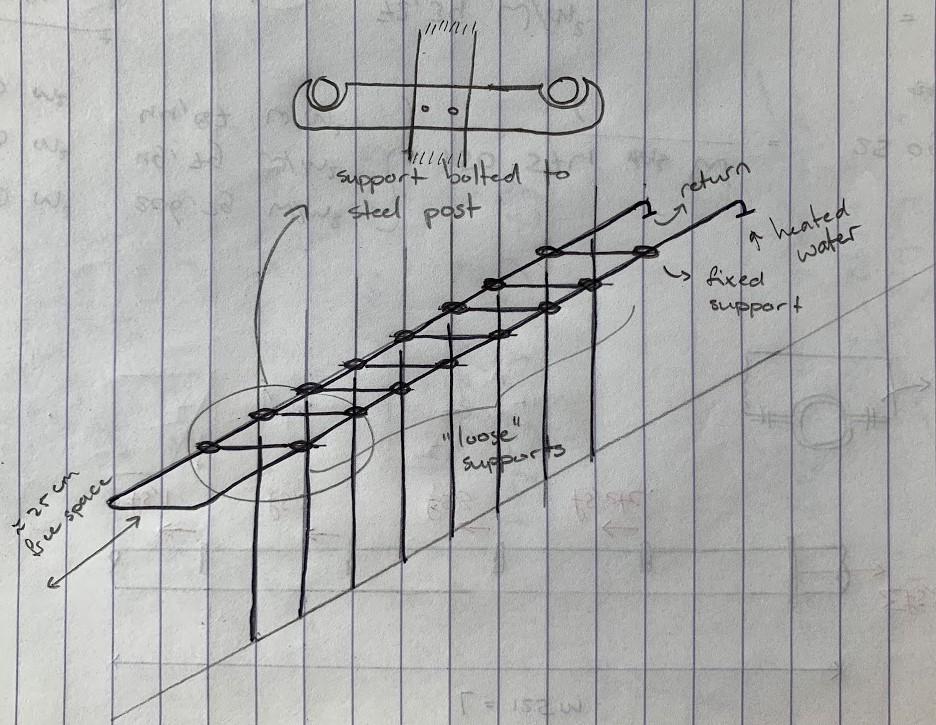 In my view, you are attacking this from the wrong angle. The pipe will expand by about 150 mm. You need to give your pipe run the required space to do so.

Look if you can use existing bends (this is what we need an isometry of the pipe run for) to account for the expansion. There's a wall, there has to be a bend. If not possible, see if you can incorporate an expansion loop:

(For a thorough explanation, check out the image source) This allows the pipe to bend somewhat. Peng and Peng (Pipe stress engineering) give the minimum length of the elbow as $2w=66\sqrt{D\Delta}$ (for steel pipes) with pipe diameter $D$ and change of length per elbow $\Delta$. Just use consistent units.

Lastly, you can use expansion joints: 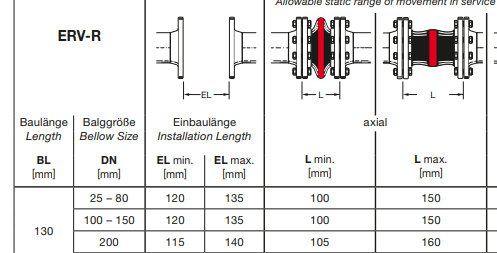 Note that you get about 50 mm of expansion per joint at most so you'd need three. Probably 40 m pipe runs with expansion joints in between and fixed supports in the middle, all else sliding supports - tbh I've only ever designed pipe runs with elbows anyway so I never really needed to plan something like you appear to have.

Of course you could have a combination (expansion joint at one end, elbow at the other).

Not the answer you're looking for? Browse other questions tagged steel friction thermal-expansion or ask your own question.

9
Steel selection for building a trailer
1
Can a plate under bending be designed using its plastic section modulus?
0
How much an unevenly heated glass plate bows?
1
Simple steel column buckling calc - where am I going wrong? (Eurocode)
1
Help with designing support structures for instrument
0
Which of these two cases will have the most friction?
0
Stress in a L-shaped Beam due to Thermal Expansion