If a fire-extinguishing bomb of sorts could be engineered or if a huge fire cover could be used, would they work better than the dumping of water?

In several regions of the world, fires rage through hundreds and even thousands of acres, and there is effectively little response that stops the fire, especially coupled with bad winds and extreme temperatures, not to mention dryness. We can dig ditches, fly over the fire with charter planes and other aircraft so as to try to put the fire out by dumping water. Short of this however, little has been devised to stop fires.

In theory, would it be possible to build some kind of bomb that carries a massive amount of some kind of compressed agent that puts out fire upon explosion? Perhaps on a molecular level there are agents that have been engineered to repel fire, and that can be built on so as to do so even more efficiently. If they were built into a big enough bomb, the explosion over a vast area of forest might seriously reduce an otherwise totally uncontrollable fire.

Perhaps otherwise, helicopters could carry some kind of really, really big fire blanket that they drop over patches of forest for say 20 minutes before lifting them back up again. Or, simply lower and detach until the fire is out. That might seriously reduce the infernos some areas experience, where other planes could come in afterwards with water that would much more effectively put out the remains.

I ask this only because it seems like since I was a kid, big forest fires have always been handled in the same way: People evacuate, helicopters and planes come in and dump water and voila. While this does help, mostly the region just remains totally helpless to the overall natural catastrophe. However, surely something could be engineered to combat these terrible tragedies, since there are so many different possible approaches. Smothering, water, human-engineered liquids, etc. With the devastation of our climate, it seems more pertinent than ever.

Using explosives to blow out oil well fires was first used in 1913 and is still a widely used method for extinguishing such fires, which are isolated point source fires.

The principle behind this method is the blast from the detonated explosives momentarily forces burning fuel and oxygen away from the fire, thus starving the fire of both fuel and oxygen causing its extinction.

Applying to method to are larger area fire where terrain can vary from flat to steep sided valleys or gullies would be very problematic.

Using a nuclear blast would have two major problems. The first would be irradiation of the affected area and secondly, the heat from the blast could ignite unburnt flammable material and the situation would be no better. Any such blast would need to be a relatively "cold" blast.

Using conventional explosives has its own problems:

It turns out there's indeed a product that uses explosives against forst fires: The system 2RS (After the developers, Chief Firefighter Dipl. Ing. Ries and explosives technician Rosenstock. The S probably means Schlauch) constists of a firehose with a detonative cord along it's length. The idea is to roll the hose paralell to the flamefron, fill it with water and detonate. 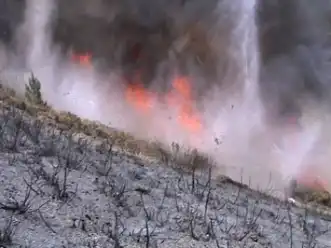 The detonation blows a mist of very finw water droplets up to 15m away - if detonating in front of the firefront, this cold mist will extinguish the fire on one side and dowse unburnt forest on the other side.

Note that this was developed in Germany, where you are never far from a road - forest fires are mostly handled from the ground with normal or dedicated fire engines, helicopters and planes play a lesser role compared to the US and I think something like smokejumpers doesnt even exist. If a fire is only reachable by plane and parachute, you probably can't bring a pump to fill the hose. Also note that the hole system presumes water near the fire - likely easier to come by in temperate Germany, compared to the mostly subtropical USA.

Another issue mentioned in the article above is that to handle the explosives, a fire brigades needs a technician trained to handle explosives.

With brief googling I only found this (German language) article on the system, (that's also the image source).

If you want to look at the history of firefighting in the US, the tragedy at Mann Gulch is probably a good starting point, as a later analysis lead to changed training and novel protective equipment for firefighters.

Not the answer you're looking for? Browse other questions tagged fire or ask your own question.