Is there a reason for the bearing to be held in place by this flimsy star chamber rather than a solid seating?

I have no engineering background at all, but when I bumped my small electric heater and it started whining and creating a burning smell, (since it's labor day with no stores open to buy a new one) I unplugged it and took it apart. Once I got down to the electric motor housing, I could spin the fan with a finger and hear the same whine, and noticed the axle (or whatever you call a rod that rotates a fan) attached to the fan was slightly crooked where it was housed within this piece.

Further inspection revealed that the brass-colored bearing (if that's the correct term) isn't securely seated within the star-shaped housing, but rather just held down by the thin tin flaps, and beyond that pressure moves freely, allowing it to seemingly cause the friction / disturbance creating the whine.

Is there a reason for the bearing to be held in place by this flimsy star chamber rather than a solid seating?

I tried to straighten it out and it appeared straight, but once I put it back together, the whine had only been reduced marginally, and the burning smell still occurred. 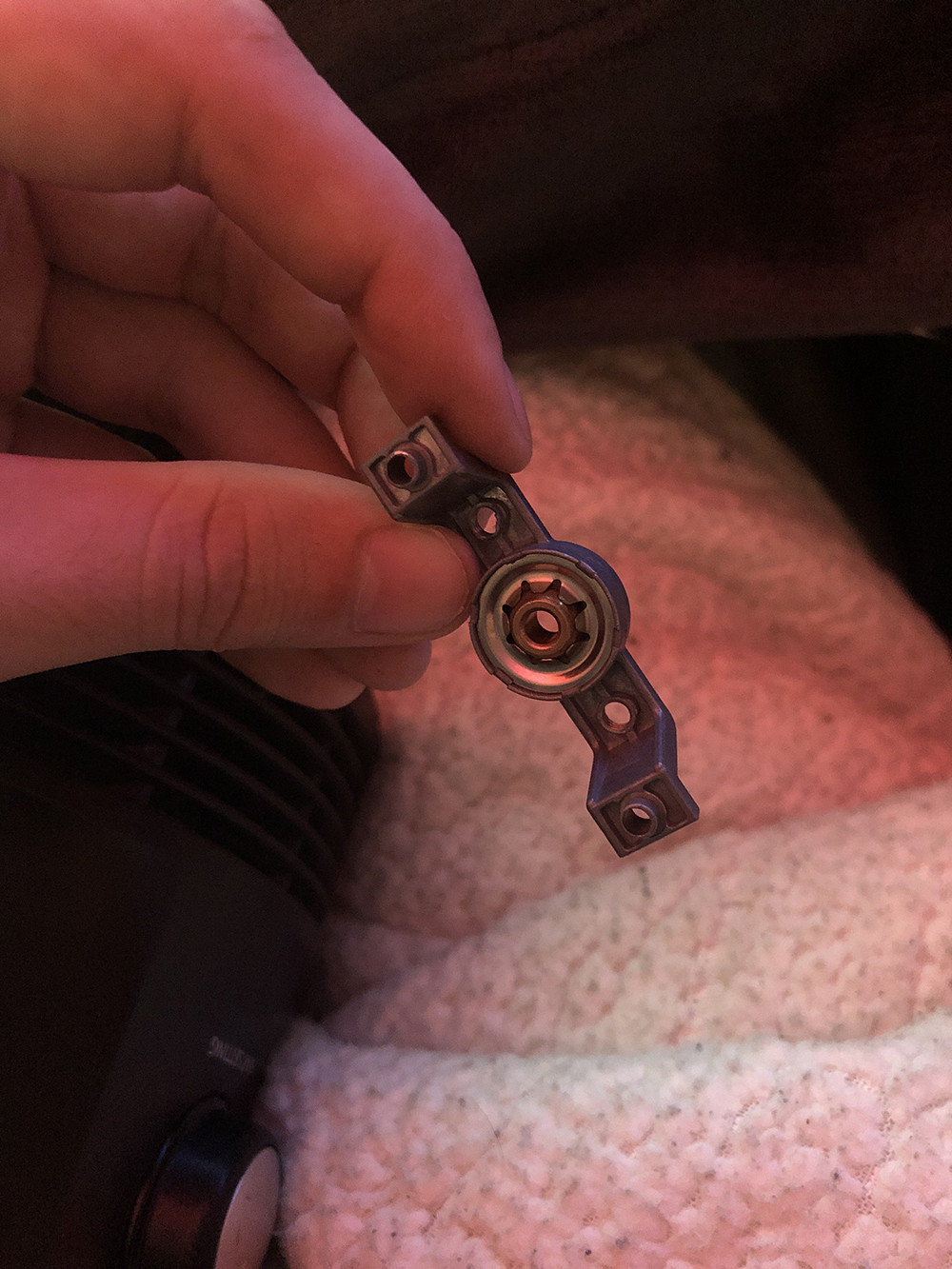 Those thin flaps allow the bronze bearing inside to tilt about slightly and thereby come into alignment with the axis of the fan shaft, thereby minimizing noise and friction. If the bearing as a whole is out of lubricant, then the bronze bearing will stick and can't shift into alignment and the device will be noisy and may also have difficulty spinning up to speed when you first turn it on.

Closer inspection will reveal that surrounding the bronze sleeve is a felt wick which has been saturated with light machine oil (usually SAE #10) at the factory. The bronze sleeve contains tiny pores which conduct the oil from the wick into the sliding surface where the shaft goes through it. It is probably dry and out of lube. A few drops of "3-in-1" brand oil applied to the felt wick through the gaps in the tin flaps will restore the bearing to its happy place.

Note that the bearing on the other end of the motor will need lubrication as well.

Apparently the bronze bushing/plain bearing is self-centering in the cadmium plated steel holder. The bearing can move slightly to accommodate the position and angle of the motor shaft. Oil would likely help it.

Not the answer you're looking for? Browse other questions tagged electrical-engineering bearings or ask your own question.

53
Why do cars have mirrors for rear view rather than cameras?
0
Designing a joint with bearing, how much do I need to protrude for the bearing to stand? With pictures
0
What is the appropriate type of controller for this system?
1
Why do most BMS systems for li-ions and li-pos stop discharging at 2.5V? Are there better systems or is this the standard
2
What is the name used for this type of connectors?
0
How this adapter inside the bearing is called? How to find/make a replacement?