I am trying to model the time-rate of change of pressure and temperature of a gas being held within a pressurized rigid volume as it escapes: an unsteady, open system with no heat transfer. Most examples of an open system provided in-class and online typically presume steady-state conditions inside the control volume of interest. I have yet to find any example that would adequately model the change of state for a gas leaving a rigid container (say, for example, a cold gas thruster where the propellant is entirely in a gaseous state, or an air compressor tank being depressurized).

Take this situation for example: an insulated pressurized rigid volume is connected to a nozzle downstream and is allowed to evacuate. I would like to know what the time-rate of change of pressure and temperature of the gas both within the volume AND seen by the nozzle inlet (assuming they're different). 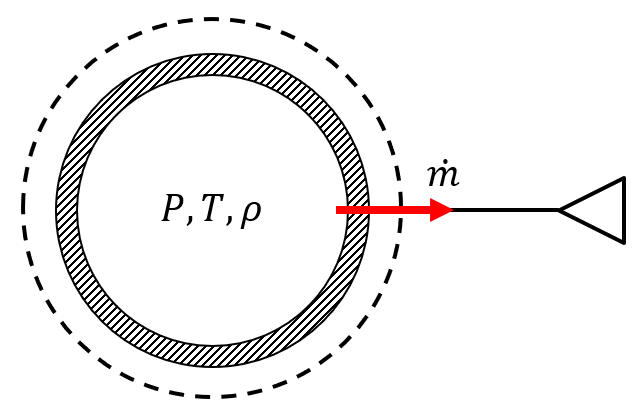 Intuition tells me that the temperature of the gas inside the volume will decrease since it is doing work to push out. I know the nozzle process is isentropic (that part I have done -- it's everything upstream of it that I wish to know more about), but I don't know what kind of process the evacuation is. I've thought that it might be Joule-Thompson expansion, but I think that would only apply if I take the system as a whole (including the nozzle). What I can't figure out is how to get the state of the gas remaining in the volume.

My first attempt at modeling this went like so:

I began with the general energy balance equation for a control volume:

There is no inward mass or heat flow (but it's not adiabatic since mass is leaving the system), so this reduces to the following:

Then by dividing through by the mass flow rate, we can put everything in terms of specific energy:

So what does this tell me? Exactly what my intuition said: that the total (specific) energy of the gas within the control volume ($cv$) will change over time as a function of the work done by the gas in the cv, the enthalpy of the gas which has left the cv, and the velocity of said gas.

So here's where I get stuck:

Is this a correct assessment for this situation?

Here's what I do know:

My initial assumption for the gas leaving the volume was that it was isentropic, but that is definitely wrong seeing as it predicts a nearly -80$^\circ$C drop in temperature (and this supposition is supported by one very quick blurb in this video). To put it succinctly: I don't know what kind of process models the gas leaving the volume. It's not isentropic, and it doesn't seem to be isenthalpic, it's certainly not isothermal. It IS isochoric but I don't know what equations are associated with that.

I would love to get some insight, especially if any of my initial assumptions are invalid. I'm very rusty at this. I took thermodynamics over a decade ago :| Thank you!

After brushing off the old textbook, I found where my knowledge gap was. Every example given online, in books, etc. always seems to assume steady flow, even in open systems such as this. That's easy enough because when you do the mass-energy balance on the system, the $\frac{dE}{dt}$ (which really should be $\frac{dU}{dt}$ because it's a change in internal energy) side of the equation will go to zero. But what if it isn't steady-state?

$\frac{dU}{dt}$ merely represents the rate of change of internal energy in the c.v., but if you want to know the pressure and temperature at any given time, you have to know what the absolute value of that energy is. Therefore, I think the solution is to track the total internal energy ($U_{cv}$ -- that is, $um_{cv}$).

From there, at each time step of your simulation, you would use the specific volume $v$ and specific internal energy $u$ to determine the pressure and temperature inside the c.v. Since the mass flow rate is controlled by the nozzle downstream, you therefore know $\dot{m}$ and can use that knowledge to determine the change in mass inside the control volume.

So for my formulation, I did the following:

Start with conservation of energy:

This is the work done by or on the system, including the work done on the stuff that is inside the c.v. (Note that you'll find slightly different vocabulary to describe all the different kinds of work that can be done on a system. For this, I'm lumping any work done by pistons, propellers, etc. into "shaft", and the work done by moving a fluid that has some momentum associated with it as "flow"). Now let's break out the work terms a little:

No work is being done on the fluid in the form of any external device used to stir or otherwise change the energy of the fluid once it is inside the control volume.

This is where "flow work" is taken into account, but i find the name to be a little misleading because "flow" (in my mind, at least) has more to do with velocity than anything else. At any rate, this is all the energy associated with compressing the fluid and moving it into/out of the system. It is the second part of the enthalpy term which I'll introduce in a sec. There's no flow in, so the only term is the outward term.

This is all the heat that is being added/rejected from the system. It's adiabatic, so no heat is added or rejected and thus it equals 0.

Now put it all together!

Recall that enthalpy ($h$) is a term used to combine the internal energy ($u$) and flow work ($Pv$) strictly as a matter of convenience. It has relations to measurable properties, but is otherwise difficult to intuit all on its own. However, since $Pv$ and $u$ appear so often together, scientists and engineers have started tabulating enthalpy in addition to internal energy and specific volume. So what we end up with is:

Now that I have my time-rate of change of energy in the system ($\frac{dU}{dt} = \dot{m}(h + \frac{c^2}{2})_{out}$), I can use my downstream isentropic flow properties to determine $\dot{m}$. Furthermore, assuming I know something about the geometry of the flow channel, I can use the same isentropic relations to determine the Mach number -- and therefore velocity -- by assuming that the stagnation pressure ($P_0$) is constant (this is where I become uncertain about my assumptions...I feel like I'm mixing metaphors, in the sense that I'm mixing isen- assumptions).

Once I have my $\frac{dU}{dt}$, I loop it through my code by doing the following:

What I got as a result was that my small, 30 $cm^3$ pressure vessel that was pressurized to 100 psig drops by 60 K down to 145 K in temperature. What is interesting is that the isentropically-calculated rate of pressure drop was very similar to this rate, but the isentropically-calculated temperature was WAY LOWER than this but this is EVEN LOWER than the isentropic temperature. What's more, this seems much more realistic based on my experimental results (wherein I did not observe any phase changes or extreme temperature swings from a single expulsion of gas) This cannot be realistic, can it?

Thanks for a nicely presented first question.

Differentiate these wrt time to get rates of change as a function of mass flow rate.

You probably need an equation to relate $\partial T/\partial m$ to $\partial P/\partial m$ as well. That should be all of the pieces.

I don't know why you think an 80 C drop is unreasonable in general. This is how oxygen and CO2 were first made into liquids.

You might try the Beattie - Bridgeman real gas model.

The five constants for common gasses are widely available. $v$ is often in the odd units of $\frac{m^3}{k\,mol}$, check this when looking up the constants.

To answer your last question, I would classify this process as an unsteady adiabatic expansion through a nozzle.

The $\dot W$ term in the energy balance usually represents forms of work other than flow work. Since you have a rigid tank ($dV=0$), there is no other work being done on/by the system, so you can eliminate $\dot W$ from the energy balance. It then simplifies to $\dot E = \dot m (h + \frac{v^2}{2})$. I use $v$ for velocity btw. Since the internal energy is changing with respect to both mass and temperature, I'd write $\dot E = \dot m c_v T + mc_v\dot T$. You can plug that into the energy balance to get $\dot m c_v T + mc_v\dot T = \dot m (h + \frac{v^2}{2})$. Note that the rate of change in temperature depends not just on the mass flow rate, but also the instantaneous mass and temperature in the system.

It sounds like you already have an equation for $\dot m$ from your nozzle calculations, so it should be straightforward to solve for $T(t)$, $m(t)$, and $v(t)$. You just have to integrate two ODEs ($\dot T$ and $\dot m$) which you might have to do numerically depending on your nozzle equation. You'll also need initial conditions for $m$ and $T$.

Edit: On second thought, it might be easier to keep $\dot E$ in the energy balance and integrate it to find $E(t)$. Then you can figure out $T(t)$ directly using $E=mc_vT$ (ignoring gravitational and kinetic energy of the fluid).

Not the answer you're looking for? Browse other questions tagged thermodynamics compressed-gases propulsion or ask your own question.