I have a project where I will need to be able to engage and disengage a worm drive (actually two of them). The worm drives are quite small. The worm gear is 49.2mm in diameter and then worm screw is 12mm in diameter. I am trying to keep the weight, complexity, and size down.

I did a google search for potential solutions. Unfortunately, I found that most of them involved fairly complicated setups with intricate parts. This drove me to look at a home grown solution.

The need to engage and disengage is to support balancing of the load on the axis. So, it is required that the worm screw be physically separated from the worm gear when disengaged.

Can you provide some feedback (criticisms and/or improvement suggestions) on the following potential solution(s)?

My proposed solution (shown in the following figure) involves a floating set of bearings which are driven on one side by a set of springs and the other side by a cam shaft. When the drive would be engaged, the cam shaft would push the top cradle block down compressing the springs and mating the worm screw to the worm gear. When the drive would be disengaged, the cam would be rotated such the the springs would push the bottom cradle block, bearing, and the top cradle block up eventually separating the worm screw and the worm gear.

The cam shaft is 2mm in diameter with the lobes extending a further 2mm down and a length of ~50mm. I made each lobe on the shaft 5mm wide.

I would then install a knurled knob on the shaft for easy turning. 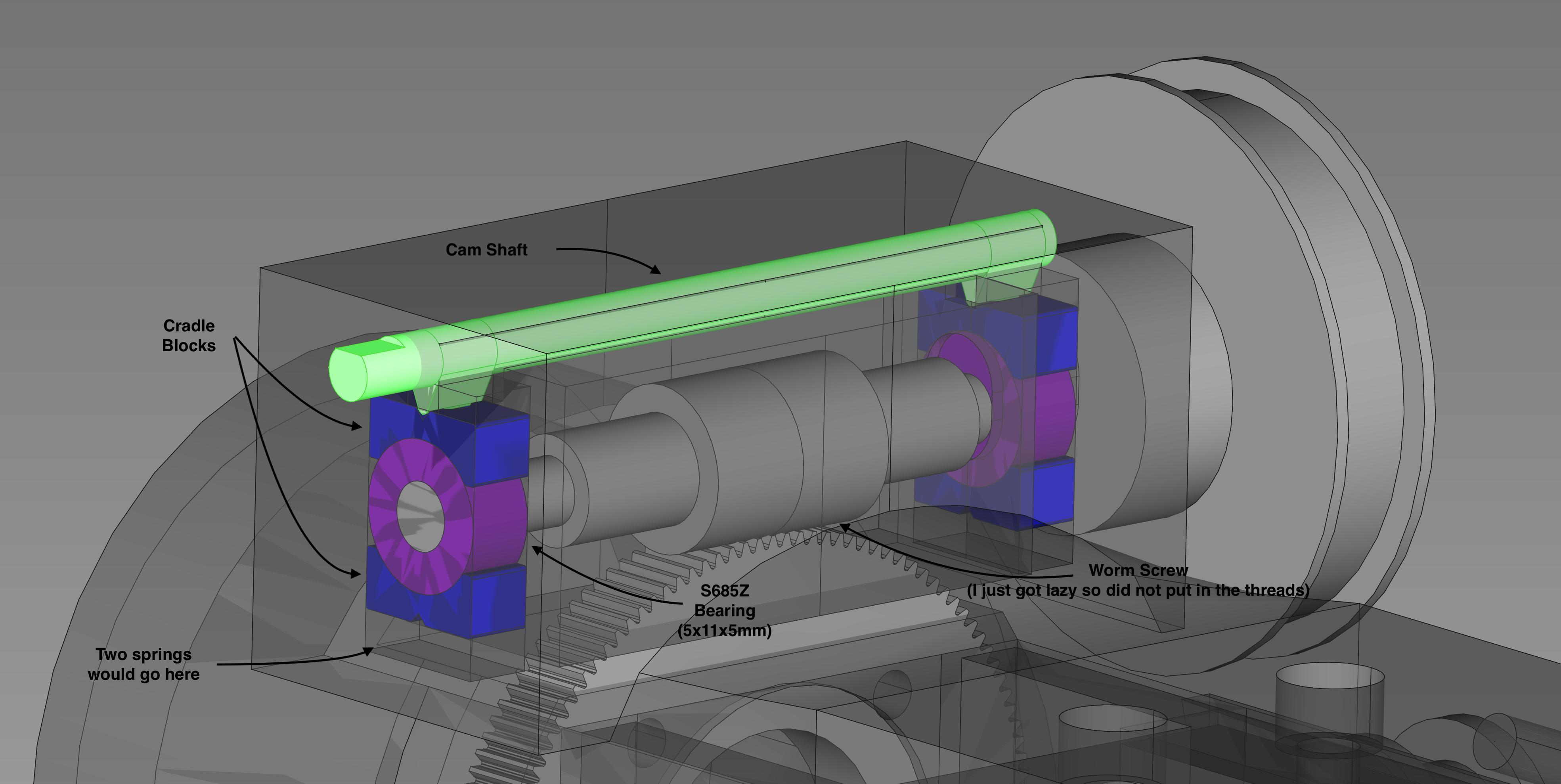 (Could not get table to render with standard markdown?)

Potential Solution #2 (This is the modification to address some concerns)

Also, instead of it being a cam shaft which would be thought to be able to rotate through a full 360 degrees, it would just be able to toggle through a small rotation for two states.

This solution addresses concerns 1 and 3. It might exacerbate concern 4 as there would be much more dependency on the springs as they would be responsible for pushing the worm screw onto the worm gear.

I would have liked a graphic of this but have not done that yet.

Browse other questions tagged mechanical-engineering gears bearings or ask your own question.

8
How can I get a stepper motor to engage with a freely spinning wheel?
4
Selectively rotating (engaging/disengaging) one of 80 couplings on a small shaft?
0
Quiet Turntable Bearing for 3D Zoetrope
3
Is a gear usually held to a shaft by friction or an adhesive?
1
How to design a rotating base?
2
Find clutch for parallel hybrid sailboat
2
Bearing and Bearing Housing for Said Design
3
reducing rotational speed from gearmotor to below 1rpm
1
Engaging and disengaging drive power
4
Radial vs thrust bearings for assembling a lift mechanism