I wish to investigate an active vehicle braking method for use in extreme situations. Very high accelerations are acceptable in situations where this would prevent the much worse accelerations present in a collision.

I was thinking of a system that will use ejected gas/liquid to reposition the position of a car and/or assist in braking. We know that ejected mass (gas or other) create a propulsive force. I was thinking to utilize this mechanism to create a force that will decelerate the car. Or maybe change its position/trajectory (eg. when it moves out of the road in a steep turn).

Would such system be viable?
What parameters would such system have?
eg to decelerate a car travelling at 30m/s within 3 meters (about 15g deceleration!).
How much mass should we eject and at which speed?
Have such systems being proposed/researched/built?

I gave this idea some thought some years ago -= catalysed by the events depicted in the video linked at the end.
What you are describing is essentially a rocket. The concept is obviously possible as it's been done long ago. Whether it is practical in any real world situations is the main point to be considered.

It is hereby proclaimed that for the balance of this answer.

For a rocket to be useful and practical in your scenarios requires it to be "safe", reliably able to be operated instantaneously at any time, suitably powerful and suitably compact and low mass.

A catalytic HP system has the advantages of being RELATIVELY low temperature, nothing but water and Oyxygen are expelled, it can be stored ready for use without need for cyrogenic cooling and is relatively non corrosive =(although cleanliness is utterly essential). The rocket is able to be "throttled" over most of its range and the thrust can be easily controlled in level and started and stopped at will.

Monopropellant Hydrogen Peroxide is not an especially high energy per volume or mass propellant. The standard "figure of merit" is Isp = specific impile which can be thought of as the amount of time in seconds that a unit mass of propellant can exert a force equal to its own weight in seconds. This can be expressed as eg lbf.s/lbm (pounds force x seconds per pound mass) and a bit of sloppy laziness allows people to cancel the lbf/lbm and call the resulting units "seconds". In fact it's really (lbm. x m/s/s x s / (lbm) = m/s = velocity!

Above I said that stopping the vehicle in 3 metres was impractical. That's essentially true, but it's not impossible. And a little consideration shows that you notionally need no more propellant to do do As long as you can get the same Isp you just need to consume the same amount of propellant at a higher rate. That requires a higher maximum capacity rocket motor, greater flow rates so bigger "pluming" bigger forces etc- but it's doable.
To stop from 30 m/s (= 108 kph) in 3 metres requires
a = V^2/(2 d) = 900/6 = 150 m/s/s = 15g (as Olin said)
Time to stop is t = V/A = 30/150 = 0.2 seconds.
Doing a 0-100kph ~= 0.60 mph in 0.2 s makes by long long log ago neighbours best toys look like toys indeed - and would make any occupant very sore indeed. BUT not necessarily dead - accelerations of that order over such short periods are survivable given proper containment - and extending it out to say 7.5 metres and 0.5 seconds and 6g has you well inside fighter aircraft and below peak moon-rocket levels.

More useful than applying gross front/back velocity changes might be applying forces to allow steering authority in skids - or for a race car which is sliding across a ploughed surface towards a tyre wall - or a concrete wall. Quite modest amounts of propellant could achieve quite useful results. Under computer control such a system has the ability to extricate a vehicle for otherwise irrecoverable situations. Also, without due care, to insert them into them. 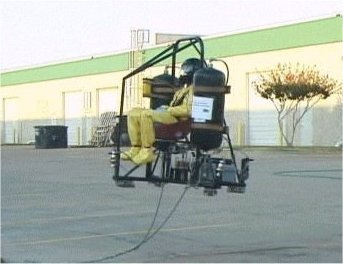 First, what you are asking about is basically what a rocket engine does. The physics is a momentum balance. The total momentum the car looses is equal and opposite of the momentum of whatever you eject out the front. You can answer the last question yourself using just high school physics.

Yes, this has been done for other vehicles. The Soyuz spacecraft uses parachutes to slow, but then fires solid rocket motors just before landing to slow down. According to this site the engines fire 1 sec before touchdown at 24 ft/s. And This site says that landing is at 3 m/s (9.8 ft/s). If these are both correct, the Soyuz decelerates with a delta-v of 14 ft/s in 1 sec just before touchdown.

15 g might seem like a lot, and it is, if the 15g is sustained as it would be in something like an aircraft's aerobatic maneuver. 15g isn't unreasonable as a limit to what humans can take in a short duration event like a crash, Indy car drivers have sustained horizontal impact forces many times that without significant injury. However, consider how those drivers are restrained to avoid injury, 5 pt harness, helmet, arm restraints, head restraints and so on. The level of G-force that humans can tolerate depends on the individual, their training and also the direction in which the G-force is applied.

Here's an interesting read on human tolerance of impact forces

Not the answer you're looking for? Browse other questions tagged automotive-engineering projectiles or ask your own question.

4
How can I determine the power generated by a regenerative braking system?
6
How to prevent shorts between exposed battery terminals and racing vehicle chassis
0
What is a good non-combustible oil to be used in air compression regenerative braking/energy storage system for cars, buses, and trucks?
2
Why does a vehicle under crosswind need corrective steering?
3
Scanning and modeling my personal vehicle for aerodynamic simulation
0
90 degree pivot steering system to allow vehicles to move sideways
1
Calculating the Braking Energy of a vehicle
1
Why don't car manufacturer's use a combination of disc brakes and electeomagnetic brakes to reduce braking distances?
3
How is rack and pinion steering configured for different wheel/axle spacing?