How do cracks form on a ship's hull?

The oil spill in Mauritius would be caused by cracks in the hull. How can this happen? Is it possible to be caused solely by rough weather?

The news item said it grounded, pretty typical,along with "hit rocks". There is so much mass in a ship that good steel with a 4:1 design safety factor can't resist fracture in a "crash". The brittle fracture of low toughness steel in WW 2 Liberty ships is not a factor . Said with crossed fingers as just when you make something fool proof, a bigger fool comes along. The fact that ship steels crack rather than crumple like car sheet steel has to to with the thickness and fracture mechanics which can't be covered in a paragraph.

MV Wakashio ran aground on a coral reef off Mauritius on July 25. MV Wakashio is a 300m Bulk Ore Carrier. It was empty at the time (no cargo). 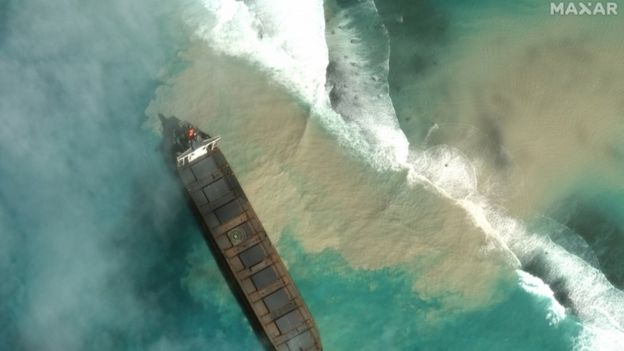 You can clearly see the reef and direction of waves hitting reef. No oil, when this picture was taken.

From IPR Mauritius: oil spill from damaged tank is over:

Since Thursday August 6, 2020, the bulk carrier MV Wakashio has been emptying its fuel in the lagoon of Pointe d'Esny, in Mauritius. Stranded since July 25, the Mauritian government was slow to react. After nearly twelve days off the coast, a crack finally formed in one of the holds.

From Press release covered by ThisNews: Mauritius on ship leaking tonnes of oil in the Indian Ocean.

The Minister disclosed that the bulk carrier was travelling with 200 tonnes of diesel, 3,894 tonnes of bunker fuel in the form of low-sulphur fuel oil and 90 tonnes of lube oil.

Due to the bad weather and constant pounding over the past few days, the starboard side bunker tanker has been breached and an amount of fuel oil has escaped into the sea.

From video on FleetMon Major oil spill off Mauritius Island 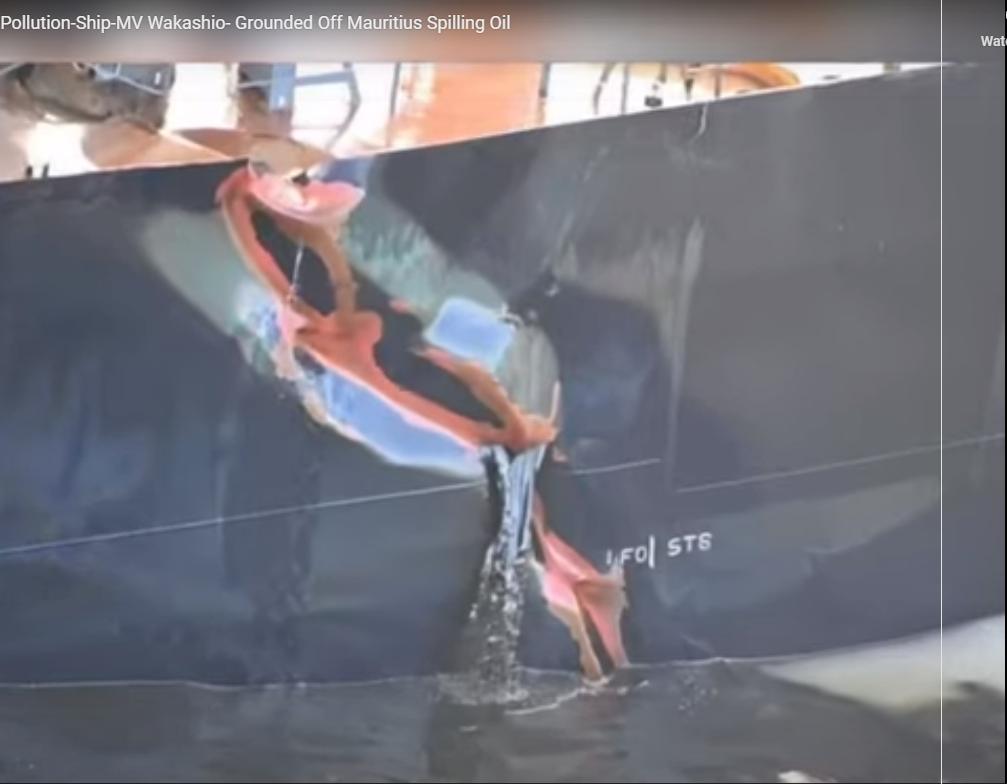 Grounding had a role to play, but hull breach was caused by storm wind and waves leveraging grounded 300m hull. All ships flex and twist due to wave action. But if hull is grounded, the laws of physics take over.

An investigation will have to take place, but empty ship and grounding about midship will be significant to findings.

Not the answer you're looking for? Browse other questions tagged marine-engineering or ask your own question.

3
How to divert solids from a downward vertical pipe
4
How to design a reinforced concrete ship keel?
1
Boat Hull Drag in Shallow Water
3
X-form and cross-form rudders in underwater control
2
Why did the Soviet Alfa-class submarines have a titanium hull?
15
What is it about the cabin electrical supply on cruise ships that makes surge protectors dangerous?