I want to attach a mast and sail to a dinghy. The mast length would be 10.5 feet tall to accommodate a 20-22 sq ft sail, but for transportation purpose would need to be collapsible into at least two pieces.

Which mast construction would offer the best strength without causing a permanent bend? How long do the overlaps need to be when using connector tube? Would 0.058 wall thickness be strong enough? 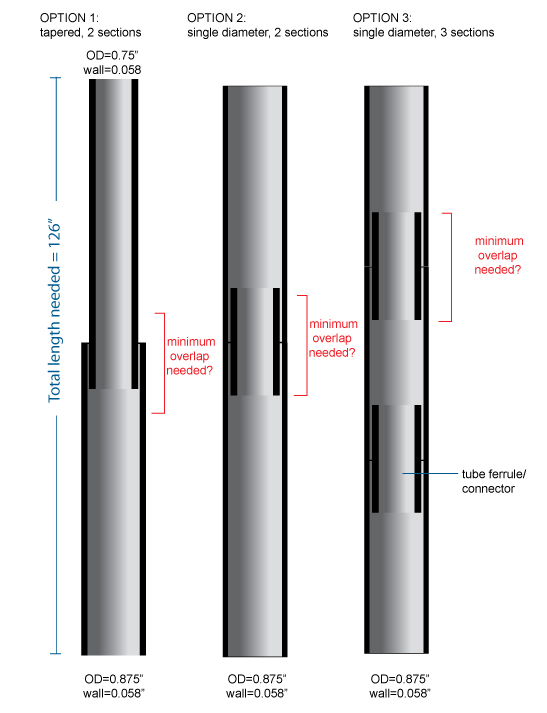 The force on your mast comes from:

Probably the easiest way to estimate the forces on the sails would be to find out what the maximum speed of your dinghy is under extreme winds, and then calculate the drag force on the dinghy. If we assume the accelerating forces from the sails are balanced out by the drag forces, then you've got your forces on the sails. It is an approximation; the boat's structure also catches the wind. So apply a safety factor of say 2.

The failure mode of the two-part mast you described above, which I would be most concerned about, would be buckling under bending of a tube (Google for pictures). Basically all the bending resistance of your mast comes from the smaller tube, with most concentrated at the hinge point. Some friction between the tubes (depending on the fit) will transfer shear to the smaller tube and reduce the radial forces on the inner tube.

If the smaller tube buckles, it will pop itself out of the larger tube.

I presume the mast you have is sized to the dinghy, in which case if we assume further that whoever did the sums knew what they were doing (these days this is a bit of an assumption!) then all you need to do is make the join stronger than the rest of the mast.

How I would join it would be via Option 2, with a solid inner aluminum rod, 5" long with a collar to prevent it falling into the mast. If possible, have an outer sleeve with an 0.75" ID + tolerance, and comparable wall thickness. Secure everything axially with shear pins.

Thank you for all the input given so far.

"Some friction between the tubes (depending on the fit) will transfer shear to the smaller tube and reduce the radial forces on the inner tube. If the smaller tube buckles, it will pop itself out of the larger tube."

Learning a bit about sail shape, one way to aid in creation of aerofoil ( besides curve cutting the sail) is by mast bend. My sail, however, is so small that perhaps I can opt to have a single diameter mast rather than tapered. I don't expect to sail in 20 knot winds and (probably boom-less) sailing would just be an added fun utility.

Not the answer you're looking for? Browse other questions tagged aluminum or ask your own question.

5
What is the opposite of flaring a tube (pinching?) and is there a tool to do this with aluminum?
6
Strength of a Vertical Round Aluminum Tube with load cantilevered off it?
3
How much weight can an aluminum tube beam support?
0
Is it possible to estimate the young's modulus of an aluminum alloy purely based off its alloy designation?