Does a single-wheel brake intervention from ESC cause one wheel to be not brakeable by the driver? 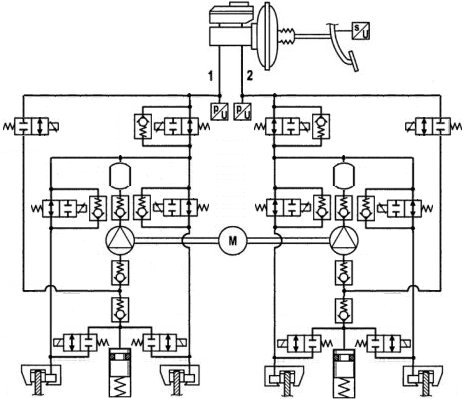 Firstly, I don't know if this is the right StackExchange, but I will try nevertheless.

Above I posted a picture of the hydraulic circuit of an ESC (Electronic stability control) system (with ABS (anti-lock braking system). Now the upper 4 valves (2 per circuit) are used to autonomously build up pressure (ESC intervention or autonomous emergency brake). Normally the inner valve is open, which leads thought the ABS valves directly into the wheel.

When ESC wants to brake on its own, it closes the inner valve and opens the outer valve ("suction valve"). This way, the path leads through the hydraulic pump and backflow is blocked by additional directional valves (I guess this is how the autohold function is working). By operating the pump, the system can now build up pressure. But since this option is only available circuit-wise, it would put pressure on two wheel at a time. As commonly known, ESC stabilizes a vehicle by braking a single wheel to induce a rotating force countering the instability.

The only possibility I see braking just one wheel is by blocking it with the ABS valve. Does that mean that, even when the driver steps onto the brake pedal, the wheel which is not intended to be braked is completely not brakeable? I dont think this would lead to a good dynamic, since it would have much less pressure than the whhels in the other circuit which are unaffected. Or does the ESC react to this and works like an electronic brake force distribution by temporarily letting fluid flow into the unbraked wheel, so that the pressure in this wheel is regulated to be the same as in the other circuit?

The computer will control the valves to provide a braking force at the wheels where it is needed and won't brake wheels that don't need braking, it won't help to equalize the braking force to all wheels when only one needs to be specifically braked.

There are several sources about how this type of hydraulic control work, Mannesman Rexroth Sigma do a set of 6 (that I have) but they may only be made available to staff - I have not seen them on sale publically but they are specialist publications so may not be found easily, and I am sure that they will not be cheap. However, they do some excellent explanations of the 2nd order control systems.

Not the answer you're looking for? Browse other questions tagged hydraulics wheels car or ask your own question.

2
Why no hydraulic piston gas compressors?
2
How to make wheel rotate slower in one direction than the other?
2
Hydraulic System design help/ directional valves
2
Help with simple hydraulic circuit to use for a four legged Robot
0
Why would these hydraulic cylinders have 3 large connections?
0
What voltage are these hydraulic valves and how to I control them?
2
How to compensate for losses in a hydraulic system?