Is it safe to use a 125PSI rated auxiliary air tank with a 150PSI air compressor?

I have a small, 5 gallon, pancake compressor which has a maximum 150PSI rating. Unfortunately, it doesn't have the air capacity to power the demands of an HVLP paint sprayer or a die grinder without the loud motor kicking on. 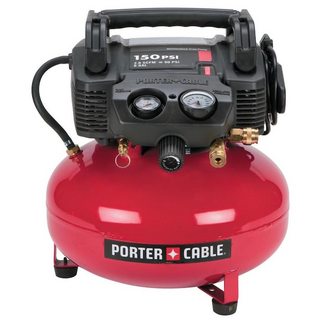 To increase the air capacity, I'm considering adding an auxiliary, portable air tank . The manual clearly says it is rated for 125PSI maximum, but the air relief valve has 140PSI Max rating punched on it. To keep it from blowing off, I'm planning on replacing it with a 150PSI one. 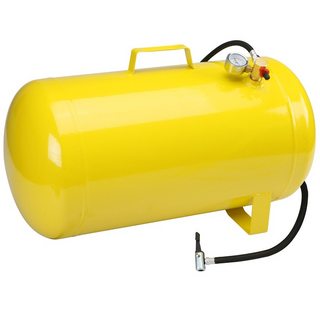 I also thought about derating the air compressor by setting it to 125PSI, but the pressure switch cannot be adjusted, at least not without replacing it.

I'm terrified of the tank exploding and covering me with shrapnel. At the same time, however, I have a hard time believing a mere 25PSI or 10PSI (depending on whether you believe the manual or the relief value) would cause the tank to explode. Is this a valid concern?

Just buy a pressure regulator to put between the two tanks that will decrease the pressure to below 125. You can get these for \$17 at home depot (https://www.homedepot.com/p/Husky-1-4-in-NPT-Regulator-with-Gauge-41155HOM/205331831) and maybe even cheaper elsewhere.

I'm terrified of the tank exploding and covering me with shrapnel.

This is a valid concern. You should treat pressure vessels as if they were bombs, because in some sense they are. Failures are "Not Good".

I have a hard time believing a mere 25PSI or 10PSI (depending on whether you believe the manual or the relief value) would cause the tank to explode.

Well, in some sense, you are right. If you take a tank rated to 125 psi and put 135 psi in it, it probably won't have an issue. But the magic word there is "probably". Let's quantify that. We can't answer the question "is it safe?" as if it was a yes or no answer. It's more like a probability that there will be in issue.

why should we think in terms of probability? Well, what determines the strength of the tank? For starters, there is the thickness of the wall. There are always manufacturing variations. Some tanks will be a tiny (thousandths of an inch) thicker, and others thinner. So due to this, some will fail at a slightly higher pressure, and others at slightly lower pressure. There are many other sources of variation, but this easiest to think about, so let's stop here.

Again, I'm just making up the numbers, but you get the point. It's like a game of russian roulette. If you are just a tiny bit over in pressure, you're "probably" good. But the higher you go, the riskier it becomes. Most tanks won't have an issue at a little bit over the rated pressure, but how do you know if yours is the unlucky weakest one?

Given that you can stay within the rated pressure with a $17 part, it's just not worth taking the risk

A 10 or 25 psig overpressure of a tank is well into a potential failure for the tank. The 140 psig safety valve is used because that accounts for the true pressure capability of the tank plus the tolerance in lift pressure for the safety valve. If you replace it with a 150 psig valve, you are risking the tank building up pressure past it's breaking point to reach the point when the 150 psig safety valve opens - the tank will vent via rupture before the valve has a chance to do anything.

If you have the Porter Cable compressor pictured, there's a regulator on the outlet. You could set that to 100 psi and fill your tank and be fine. As everyone has mentioned if you fill it to 150 psi you'll probably kill yourself or at least soil some underwear when one of the end caps explode.

-1
How do I limit the pressure of a tank to a fixed PSI?

2
Air tool to compressor backflow
0
How does loading and unloading work in an air compressor?
1
What type of air blower/compressor to use?
1
can we run rotary compressor of Air conditioner with different frequency level?
1
Define Free Air Delivery for an air compressor
1
Pneumatic cylinder: Pressure rating
2
Slow Driving an Air Compressor
0
Pneumatic pressure sensing in a moving air compressor line