How does a dimension like “2-Ø12X25L” describe an oval hole?

This is a schematic for a plastic piece that has an oval hole on it. I understand that the Ø12 part of the measurement is for a diameter, but I do not understand what the "X25L" at the end is indicating nor do I understand the "2-" at the beginning. What is the meaning of those numbers? 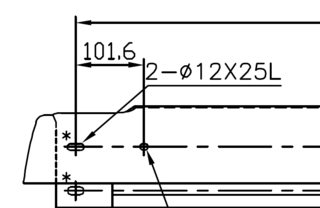 The "2-" refers to the fact there are two of these holes somewhere on the print. Rather than making that same note every time the hole appears, you can say "2-" or "6-" and leave it to be assumed that all similar holes are identical to the dimensioned one. (At my company, we use "2x" or "6x", but this person may not have wanted to do this considering there's another 'x' in the note, but some proper spacing should easily clarify that.)

The Ø12X25L is the full dimension of the hole size. I actually don't like the diameter symbol in front of the twelve, because it's not really a circle, but it's still relatively clear. In any case, the twelve is the diameter of the semicircles at each end, and thus also the width of the slot. The 25L is the length of the slot. Because it's not a circle, you do need two dimensions to determine its size. (Don't confuse this with bolt sizes, which I often see as M12x80L, where M12 is the bolt size and 80L is the actual length. Oval bolts are a bad idea generally.)

The 25L refers to the length of the slot. It looks like you have two slotted holes, so the 2- means two separate holes. Having the entire drawing visible would help ascertain for sure if this is the case.

Normally, on structural (building) drawings, holes like this would be called out as "12mm DIA. X 25mm SLOT, TYP," but as this is a mechanical drawing, I am not particularly up to snuff on the correct drafting standards.

Not the answer you're looking for? Browse other questions tagged mechanical-engineering drafting or ask your own question.

7
What is the name of this mechanism for raising and lowering the impression cylinder of a printing press?
0
Where is the “angle” in the first, second, etc. angle projections?
3
How do you apply fits and tolerances when designing hole and shaft?
4
Using a 'D' shaped shaft with a set screw
6
How to find press fit/ slip fit for non standard size parts?
1
Ways to attach stuff to a cylindrical tube that is in vacuum?
0
What is the formal term/process for writing down a design?
1
Meaning of O-slash in data sheet about gear diameter?
0
Interference fit in acrylic/plexiglass (PMMA)