How did OXO manufacture this colander with such intricate wall feature?

Here's my guess, but I would love to hear another perspective.

I think this is injection molded. This colander has draft angles and the two mold halves use an intricate step-like wall pattern to create the final holes on the wall.

(For extra point, how would you efficiently produce the wall pattern in CAD?) 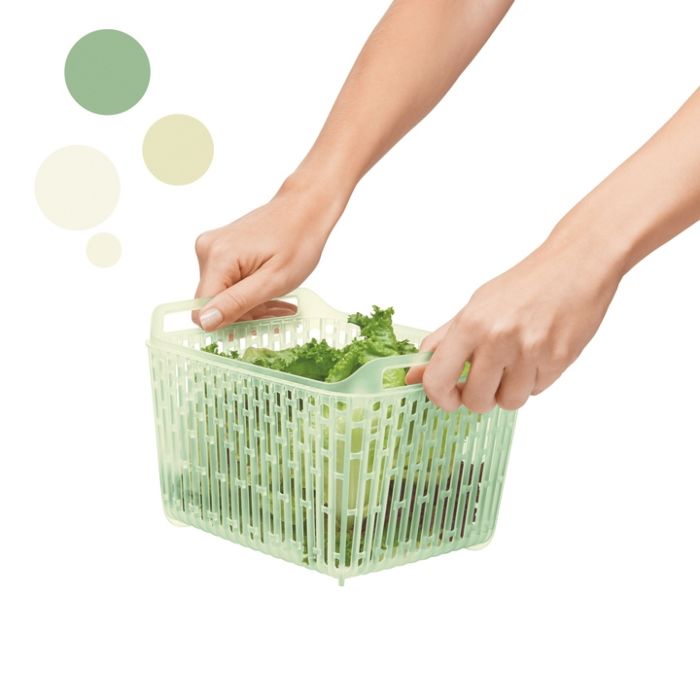 This colander was definitely not CNC machined, it was injection molded. Without being able to inspect the part closely, I will guess that the shutoffs (the open spaces between the plastic ribs) were formed by a retractable feature in the mold which presses against the mold core during the injection process, and then is pulled away from the core when the mold is split, so the part will not hang up in the mold.

The other way to do this without a mechanism in the mold as described above is to cleverly shape the halves of the mold in such a way as to form the shutoffs naturally as the two halves of the mold are pressed together. This is a tricky thing to accomplish because it creates an extremely complex parting line between the mold halves which greatly increases the chances of creating flash, where small amounts of plastic squeeze inbetween the shutoff zones and leave thin webs of plastic that close off the shutoffs.

Looks like pretty routine machining for the steel molds ,probably with a CNC to speed it up. I doubt it is complex enough to need side actions in the molds, only ejector pins to push the the solid plastic part out of the mold. If you want to see clever machining , look inside a sewing machine, some parts do not seem to have a straight, flat surface anywhere . Long ago I worked for an investment foundry that made several parts for Singer , no CNC to help.Parts were molded in plastic then investment cast in steel allowing for thermal shrinkage. Better yet ,look up a Hydril "wedge thread" for oil country tubulars , although pretty difficult to visualize from a picture.

Not the answer you're looking for? Browse other questions tagged design manufacturing-engineering cad plastic computer-aided-design or ask your own question.

2
How to manufacture parts with complex air channels inside?