Why is conservation of mass holds on filling balloon with gas?

Given a ballon and only one inlet, where some gas enters at a constant rate and the control volume of the balloon changes with time, why does conservation of mass hold?

To give some background, this is an example problem in the Raynold's Transport Theorem section.

What I don't understand and looking for clarification is that, since the mass is added to the system, how is the mass of the system constant. It changes with time, is it not? So how is the conservation of mass holds $\dfrac{dm_{sys}}{dt}=0$? (See "comments" section of the below image) 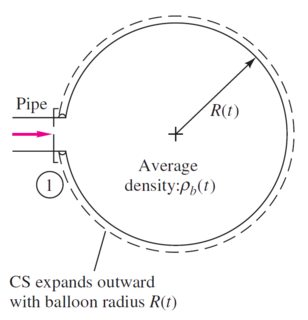 Here is the original question: 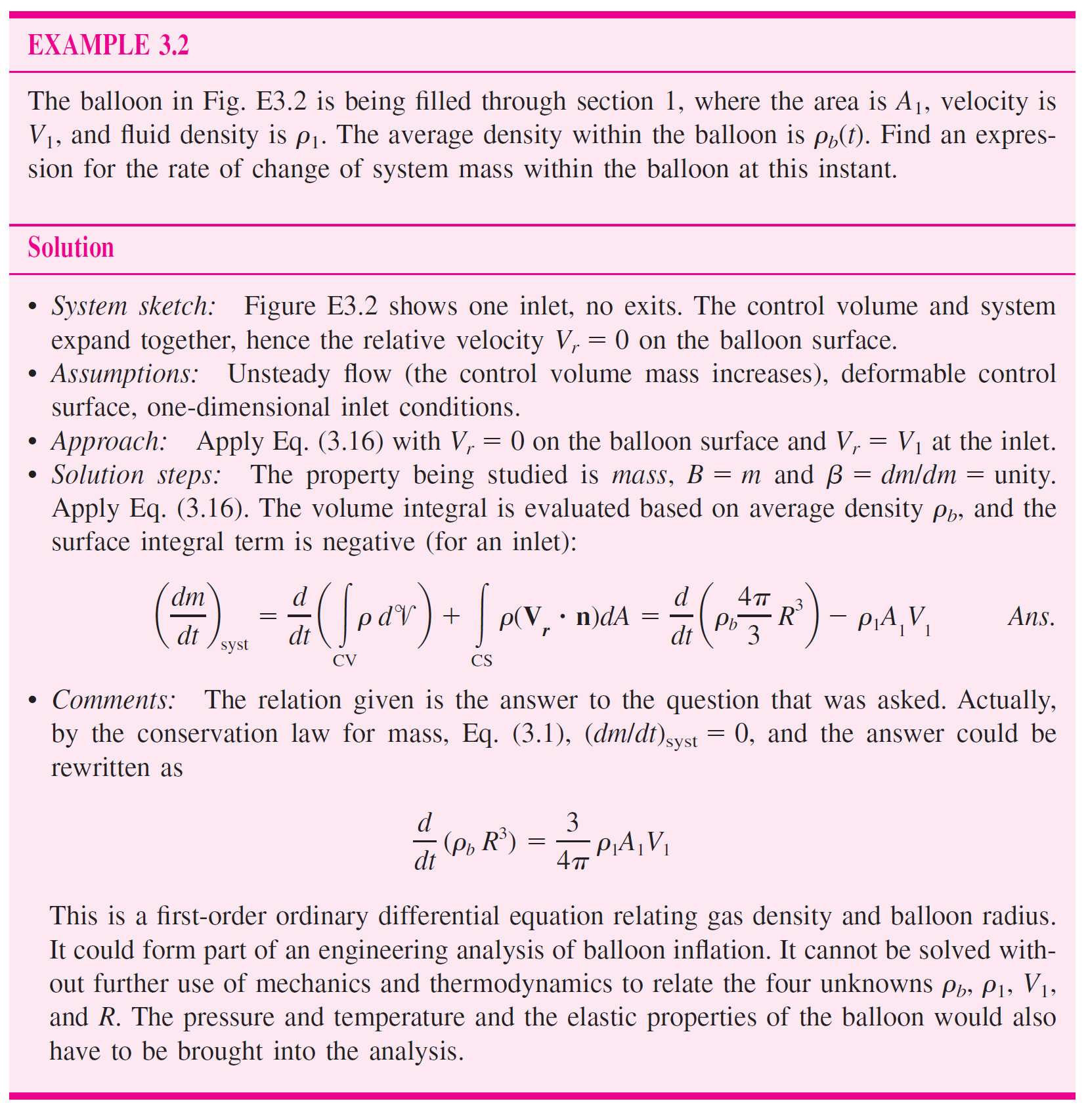 and the eq. 3.16 is the Raynold's Transport Theorem:

Thank you in advance!

The system is a collection of contents and, because of that, its mass does not change. Hence $Dm/Dt = 0$.

The control volume/surface corresponds here to the balloon and, as stated, it is deformable (it inflates).

After some time (i.e. after the instant of observation above), there will be more air in the balloon, but your system is still the same (i.e. the initial particles/molecules). This is, inside the balloon you will have molecules with label (the system) and molecules without label (the ones that entered afterwards).

The other answer is, unfortunately, missing the point. The Reynolds Transport Theorem relates a Lagrangian view (the system) with an Eulerian view (the control volume) and it does that for the instant they are coincident. This is what is done in the equation with the $B_{sys}$.

On the left side, you have the rate of change of property B in the system (for the instant the system and the cv coincide).

On the right side, you have two components:

And so, because it is in the instant the system and the cv coincide, the left side equals the right side of the equation.

Because in this case the property is mass, we know (by definition of the system - first part of my answer) that its rate of change (in the system) is zero.

You're right, as long as gas particles are coming in through the pipe the total mass of the balloon will increase. Temperature, pressure, etc. don't even matter in this context, if even one molecule makes it into the balloon the mass has to, and will, increase. The only possible explanation is that your understanding of the defined system boundaries is lacking. If wherever the gas is coming from at the other end of the pipe is also part of the "system", then naturally the mass of the "system" won't change.

Edit with new information: As I thought, it was a misunderstanding of the defined system boundaries. The obvious solution to the question "how does the balloons mass change over time?" is "as much as stuff goes in, so rho1A1V1". The comment they added is indeed more of a sidenote and not as helpful as it should be. rhoAV is the actual solution. The equation they sat up is actually the balance over the whole system, including the pipe and naturally the change in mass of the entire "system" is how much heavier the balloon gets minus how much lighter the pipe gets... Interestingly enough they defined the system as "system mass within the balloon" so this balance is more or less pointless. The conservation of mass is only valid if no mass is transported over system borders, and in the case of their formula where they watched the entire "system" of pipe plus balloon, dm/dt is indeed 0 since the mass the balloon gains needs to come from somewhere. And if they set the equation value to 0 they can separate the variables and the constant terms to make it a bit cleaner. The whole comment is not relevant for the solution, though.

1
Can somebody explain how this equation(based on conservation of mass of a fluid) came about?
9
Why does filter efficiency decrease with thickness?
5
Dynamic mass balance in plug flow reactor
2
Why use different specific heat capacities in the energy equations for incompressible and compressible fluid flow?
1
Isentropic Flow and Conservation of Mass
1
Deriving the ideal equation for sluice gate problems - incompressible inviscid fluid
1
How do I Calculate Pressure at Multiple Points in Time while Filling a Container with Water?
2
Help with Mass Flow Rate
0
why LP gas tank does not provide fuel when the pressure reaches 10%? And to to resolve the issue?
0
If a gas is pushed through a widening section of a pipe with a piston, will the pressure increase?