What is the significance of hinge in the internal structure of the beam?

I had come across a question on shear force and bending moment diagram where a cantilever beam with a roller support at point C is given and the portion beyond point C in overhang. Does this hinge act as a internal release point in the structure? If yes then the does this mean bending moment about point B is zero. 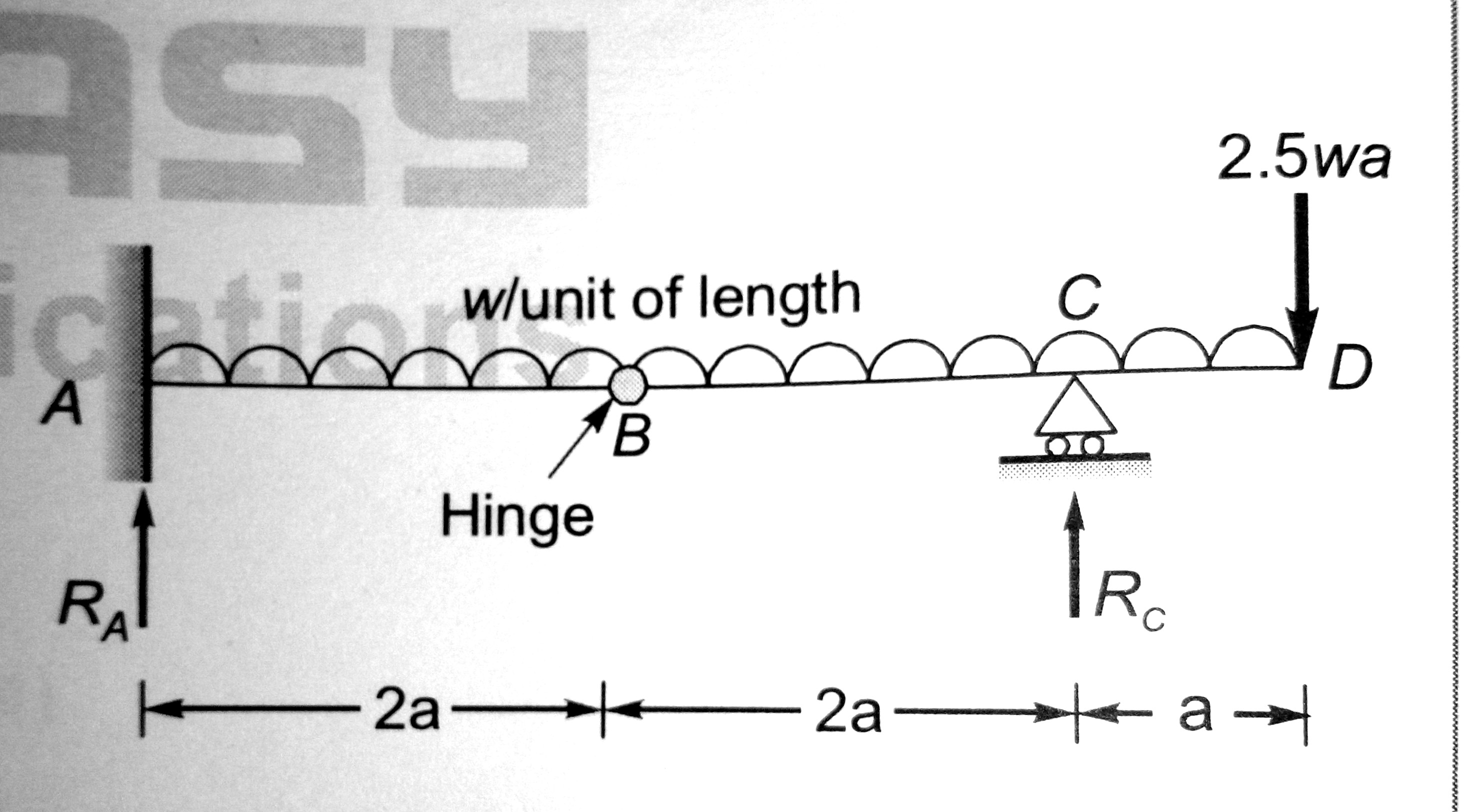 Hinges, however, don't have this restriction and therefore allow for discontinuities of rotation. And since bending moment is generated by a beam trying to resist changes to its curvature, we can conclude that there is no internal bending moment at a hinge.

does this mean bending moment about point B is zero

To be clear, a stable structure will have zero bending moment about any imaginable point. We tend to perform our $\sum M = 0$ calculations around supports because it eliminates some variables, but that equilibrium equation is valid about any point in the universe.

So, at midspan in a beam, for example, you calculate the bending moment generated by all the loads to the left (or right) of the beam, which will (usually) result in a non-zero value, representing the beam's internal reaction to the curvature being felt at that point.

If yes then the does this mean bending moment about point B (the hinge) is zero.

You should re-read your notes, or look up "hinge" in your book's index, and start reading up, starting with the first mention.

How can the bending moment around a hinge be anything but zero? What happens if you have a hinge and it has bending moment? What does it do?

Does this hinge act as a internal release point in the structure?

You phrase that as if you're really saying "why would a designer put a hinge there?". The answer is -- they probably wouldn't. This looks like a question in a first course in statics, where all beams are rigid and straight. If so, then the textbook author is avoiding a situation where the beam is overconstrained. By putting a hinge in the middle, they turn the problem from one where the cantilever and the roller support "fight" one another* for control of the beam position into one where the position of the left portion of the beam** is controlled by the cantilever attachment, and the position of the right portion of the beam is controlled by the hinge and the roller support.

* Such a situation is called "overconstrained"; determining the forces on an overconstrained member gets into a lot of issues that I know intuitively but never studied. Basically, you have to know how the member bends in response to forces, and you have to track the interplay between those forces and the bending of the member. When you start to consider the fact that everything bends (the member you care about, the thing it's fastened to, the fasteners, etc., etc.) then the solution gets very complicated, which is why old graybeards will just eyeball the assembly and tell you what to do, without using a computer.

** I say "left portion" and "right portion", but really, you could treat this as two beams.

Not the answer you're looking for? Browse other questions tagged structural-engineering structural-analysis statics solid-mechanics or ask your own question.

6
Fragmentation of a curved cantilever beam under compression
3
What does "beam end release" actually mean, and how it is modeled in mathematical terms?
2
Confused about internal hinges for calcualting reactions
2
Is bending moment along a beam independent of the cross sectional area of the beam?
0
Modeling the Internal Forces Exerted on a Catapult Arm while Throwing
0
Slope of the Bending moment diagram where a point force acts
0
Equations of condition: why are two moment equations around a hinge dependent?