Let's say I put in an endoscope like camera with the lens at the inside edge of the box and the wire behind metal sheet. Here's a mockup: 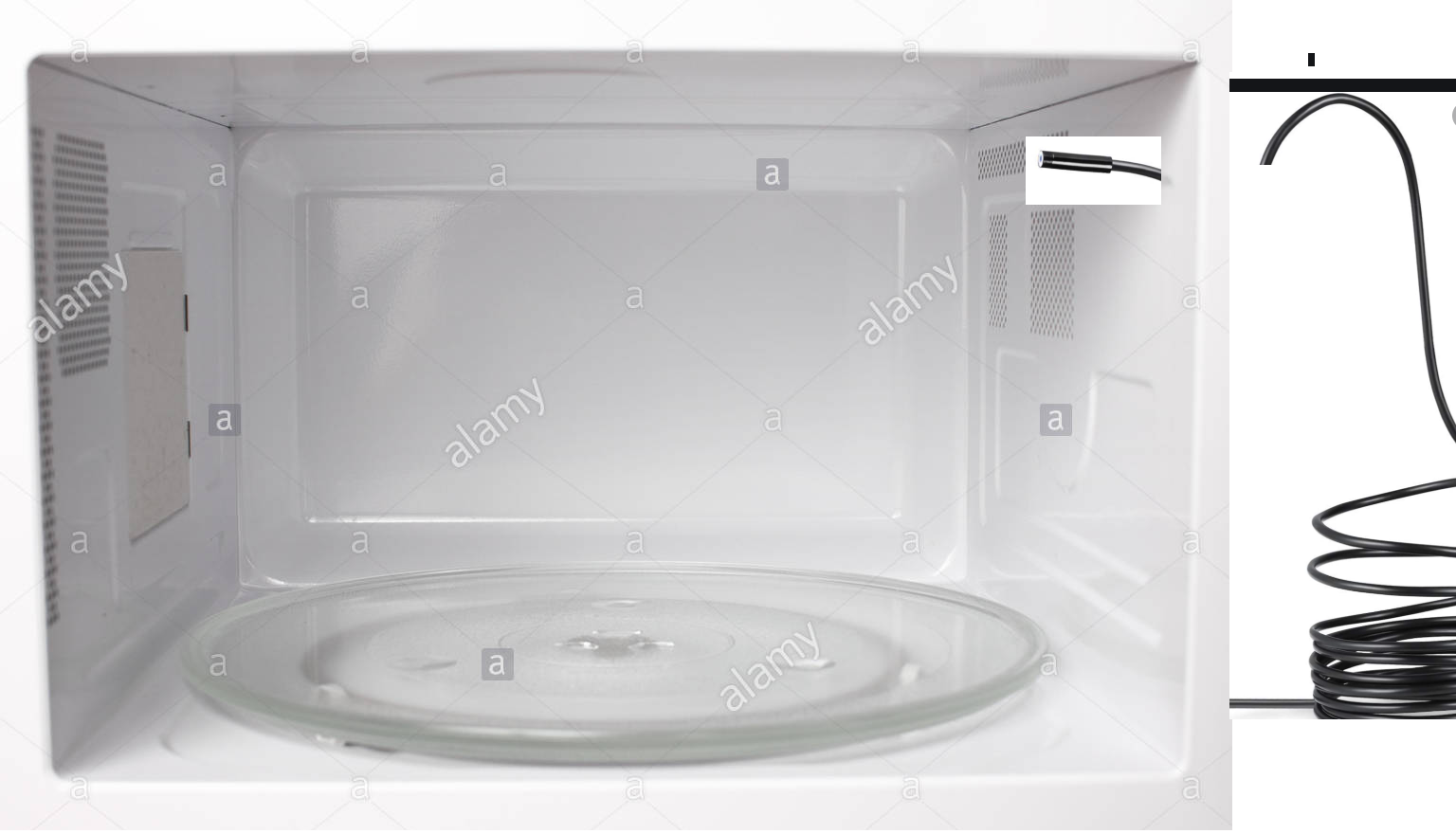 Could use microwave reflecting or absorbing wrap to wrap the body/wire of the camera.

Would an endoscope like camera be safe from microwave radiation/energy behind the inside microwave box?

The microwave will create a set of standing waves in the 'box'. These waves are formed from the left (notice the mica plate, which appears off-white and acts as a waveguide cover) and reflect back from the right metal panel. The wavelength of these waves is approximately 12.8cm, because microwave radiation inside microwave ovens (and the resonant frequency of water molecules) is 2.45GHz. This means that 'nodes' of the standing wave are 6.4cm apart. Since the electric field is 0 at these nodes, there is no heating. Therefore, your food must turn on a plate to be heated uniformly!

If you could find a way to place your camera at one of these nodes, it would be completely unaffected. Finding a node in the middle of the oven isn't going to be easy. There are crude methods, like putting chocolate in the oven and looking to see where melting occurs (after the turntable has been removed). However, the electric field will be 0 at both of the left and right sides of the oven. Place your camera there, and it should be OK too.

Drilling holes and modifying microwave ovens isn't recommended, though. They have magnetrons operating at several thousand volts and are a death trap for the untrained/unsure. Although microwave radiation is non-ionising, it can be pumped out of a microwave oven at a level of power that could be detrimental to your health. A modified microwave oven should not be regularly used, because it's likely it will be leaking EM radiation.

Your safest option, in my opinion, is to video or film from behind the window. It appears that many other people film behind a microwave by using a very wide aperture lens which allows the 'mesh' of the microwave's door to appear invisible. You could modify the microwave door (somewhat safely) by drilling an opening into the glass of 1cm or so---again, this is risky.

Not the answer you're looking for? Browse other questions tagged design consumer-electronics thermal-insulation radiation or ask your own question.

4
Why are the processes called “Precipitation Hardening” and “Solid Solution Strenghtening”?
0
Was our wireless home telephone in the 1990s encrypted or completely insecure? And how did it work so far from home?
2
How can the ink dry so quickly after it comes out from an inkjet printer?
49
Are toasters really electrified inside of the “slots”?
1
Is using your mouth and lungs to blow away dust inside your computer somehow bad for the computer?