Cheap but durable design for a quick-to-assemble, portable globe?

This question has a bit of an arts & crafts / DIY flavour, but looking at those Stack Exchanges made me feel it fits better here. I have no background in any of these things, so apologies for my ignorance, including any poor etiquette! I'm happy to improve the question if people provide feedback - or, I suppose, to remove it - but am not sure it'll be better-received elsewhere.

I'm interested in making a globe, around a metre diameter, that can be easily assembled, disassembled and carried around in a compact form. I was thinking of using 20 hexagonal and 12 pentagonal pieces, like a football - I'd prefer them to be curved, and ideally 3d printed so I can easily add colours and/or texture on the outside. But I'm not sure how best to join them together (triangular joints? hinges? struts? elastic bands? I have no idea), or what materials and thicknesses to use. My main constraints, roughly in order, are budget, weight / compactness, durability, ease / speed of (dis)assembly, and ease of manufacture.

What are some sensible approaches?

Bonus points: it would be nice if

An option you may consider is called a rotegrity sphere. 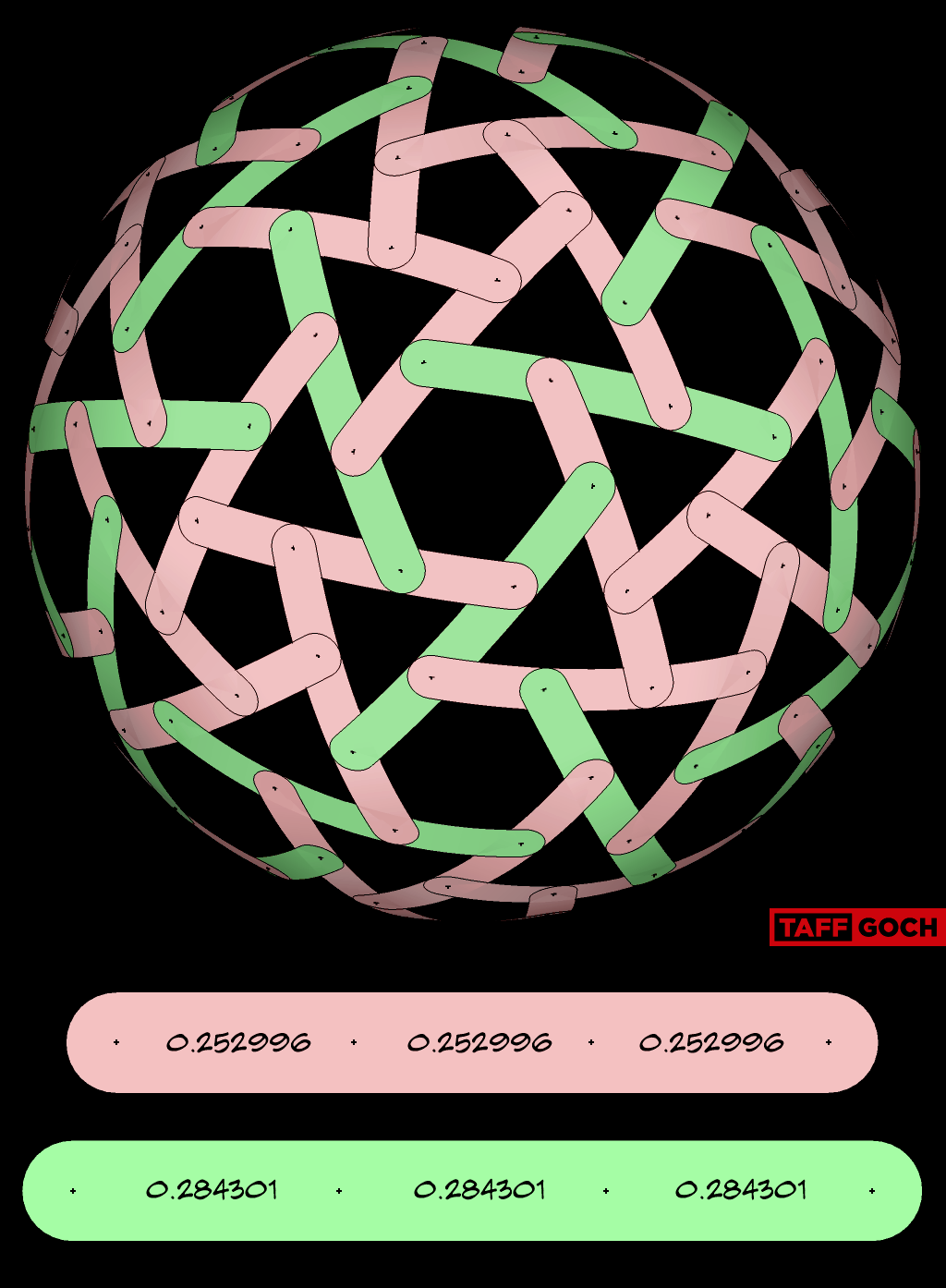 The numbers show the spacing for a unit radius sphere. For a one-half meter radius, divide the numbers by two and convert to millimeters.

My first exposure was from TaffGoch web site which allowed me to build two different models of two sizes, one with 3D printed members, the other with laser cut cellulose acetate members: 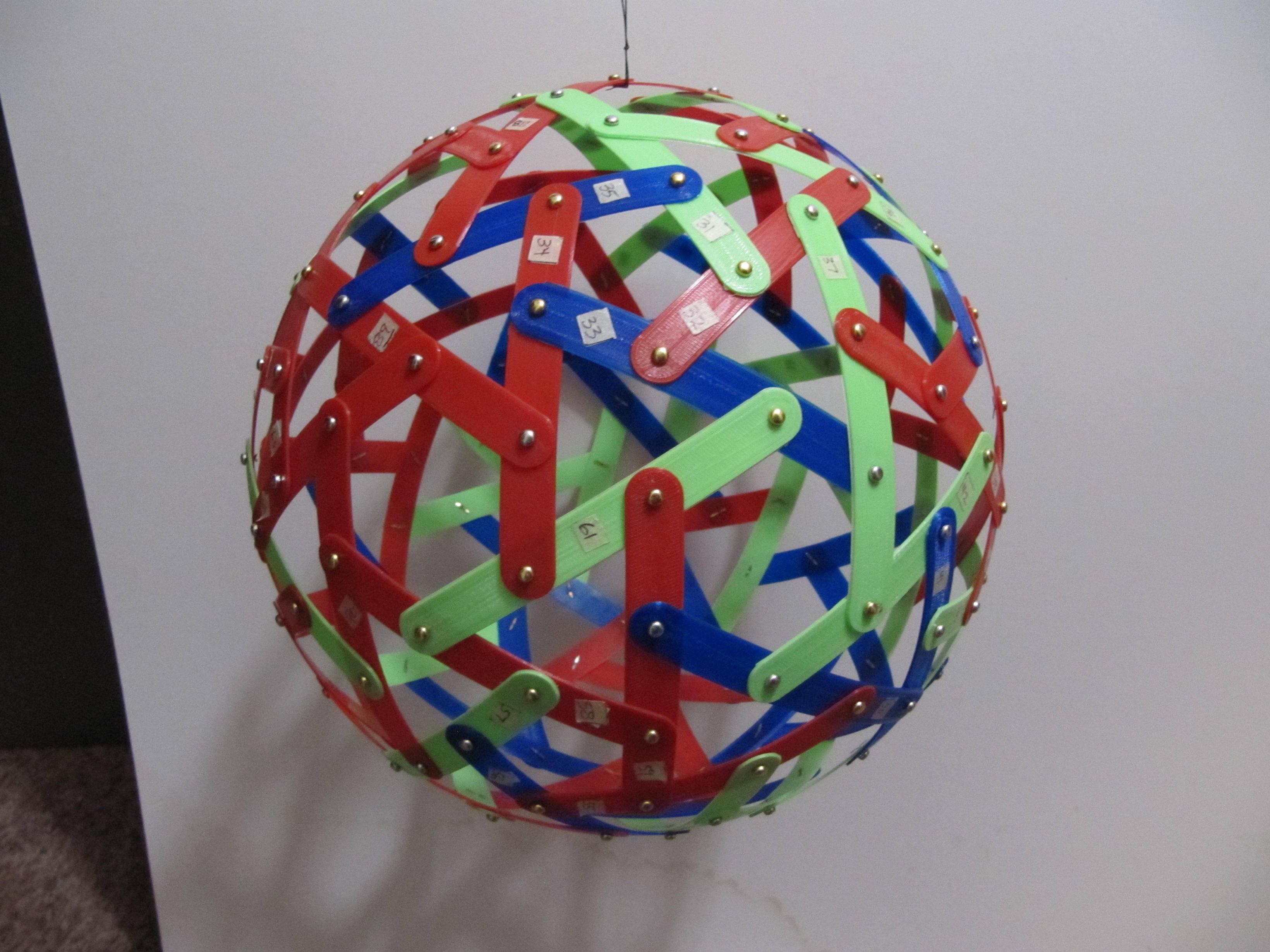 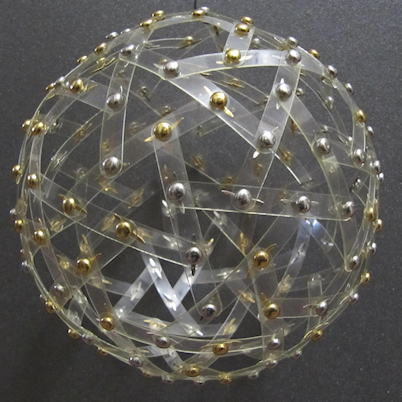 The numbers were applied to masking tape to make it easier to assemble, as the different colors only confused the assembly people. With only two different length pieces, it's relatively easy to assemble.

The cellulose acetate sphere is about the size of a grapefruit or softball, while the 3D printed one is a bit larger, although I forget the specifications. Slightly larger than a basketball, I believe.

One could strip/rip thin pieces from lumber to get the necessary flexibility for making a sphere. Larger is better for that type of build. It looks complex, but once the initial build is done, it's easy to mark intersections for easier assembly later.

Note that there is a pentagon in the image. They have all the same length parts and disassemble flat (until the plastic takes a set and remains curved forever!) The longer pieces join to each other and to the pentagons in a straight-forward manner.

For a skin or surface covering, the magnet idea has merit. Once the skin is cut to shape, magnets can be sewn into pockets and glued or recessed into the wood of the structure.

You asked for 3 to 7 pieces. Unfortunately, this 2v model breaks down on the pentagons at twelve pieces, plus the longer strip joiners. There are 60 of each of the two sizes for this model, but that sounds worse than it is.

Not the answer you're looking for? Browse other questions tagged design structures or ask your own question.