What is “flow instability” in porous media?

I just came across this paragraph in a paper studying the flow stability in porous media in solar volumetric receivers, which I couldn't digest at all:

What blower? and what makes pressure drop cause different mass flow? (Keeping in mind previous equations)

So, I've only been able to find the abstract of the paper but it seems to outline the basic concept.

The device in question is forcing air through a porous ceramic medium in order to dissipate the heat that the medium absorbs from solar radiation.

First, the blower. Some sort of device is necessary to cause the flow to occur (it's not going to happen spontaneously). In this case the authors have used a blower (substantially similar to a fan), in order to either force air towards one side of the medium or draw air away from it.

Instability can have have somewhat different meaning depending on context, but generally refers to a system with a tendency to deviate from a steady (not varying in time) solution. A classic example is an inverted pendulum. When perfectly vertical, the pendulum has 0 force and should remain in position (steady). However, any small deviation results in forces that drive the pendulum away from that steady state (instability).

Based on a later paper by that group, they found that their porous flow system, which "should" exhibit a single, steady uniform velocity across the surface, became unstable when a small part of the medium was heated. Specifically, they found that if the system at steady state was heated in one spot, the flow velocity in that region would drop, reducing the cooling effect in that region and allowing it to be heated further by the solar flux. The hot spot did not dissipate, allowing the system to return to the uniform, steady state.

In the unstable sense, the reactor will become a fludizied bed reactor. i.e. the different flow densities will cause some spots to flow more than others. This means that "wide" openings, with more fluid through them, will get "wider", and narrow opening, with less fluid through them won't open at all, causing them to get utilized even less until they are ignored altogether.

In all of these cases, the original equations do not apply.

Expanding Dan's answer (after some research), The main reasons for the so-called instability in porous media that is subjected to a heat flux (e.g. Solar irradiance) with air as a working medium are the behavior of dynamic viscosity of air with temperature (Viscosity increases as temperature increases) and the bell-shaped distribution of concentrated incident solar flux on the porous receiver.

Many experiments mentioned in the same paper suggested a relationship between incident flux and velocity of air, If a local high flux spot was formed in a porous medium mass flow rate is decreased and temperature is increased (high local dynamic viscosity leading to a lower local flow rate) and vice versa for local low flux spots, which means that the porous medium temperature can exceed the design temperature leading to failure even if the outlet temperature is low.

This can be shown by integrating the Forchheimer extension of Darcy's law using a correlation for viscosity behavior with temperature and ideal gas law, the following curve relating the quadratic pressure difference and outlet temperature can be obtained: 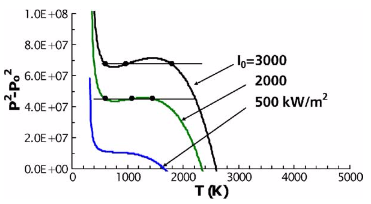 It can be shown that at specific incident fluxes at the same quadratic pressure difference there could exist two different outlet temperatures (hence the instability).

Not the answer you're looking for? Browse other questions tagged mechanical-engineering fluid-mechanics porous-medium or ask your own question.

5
What does 'Open Flow' mean for a pump flow rate?
6
efficiency and flow separation
7
Ways to reduce turbulence in internal flows
4
How safe is this assumption for turbulence modelling in porous media?
7
Is there a relation between porosity and PPI density in porous media?
2
What engineering research field is concerned with the mechanics of adhesion; more specifically, how objects behave in soil media such as sand?
2
J2 orbit propagation problem in MATLAB (solver instability)
1
Up flow vs down flow through a porous fixed bed