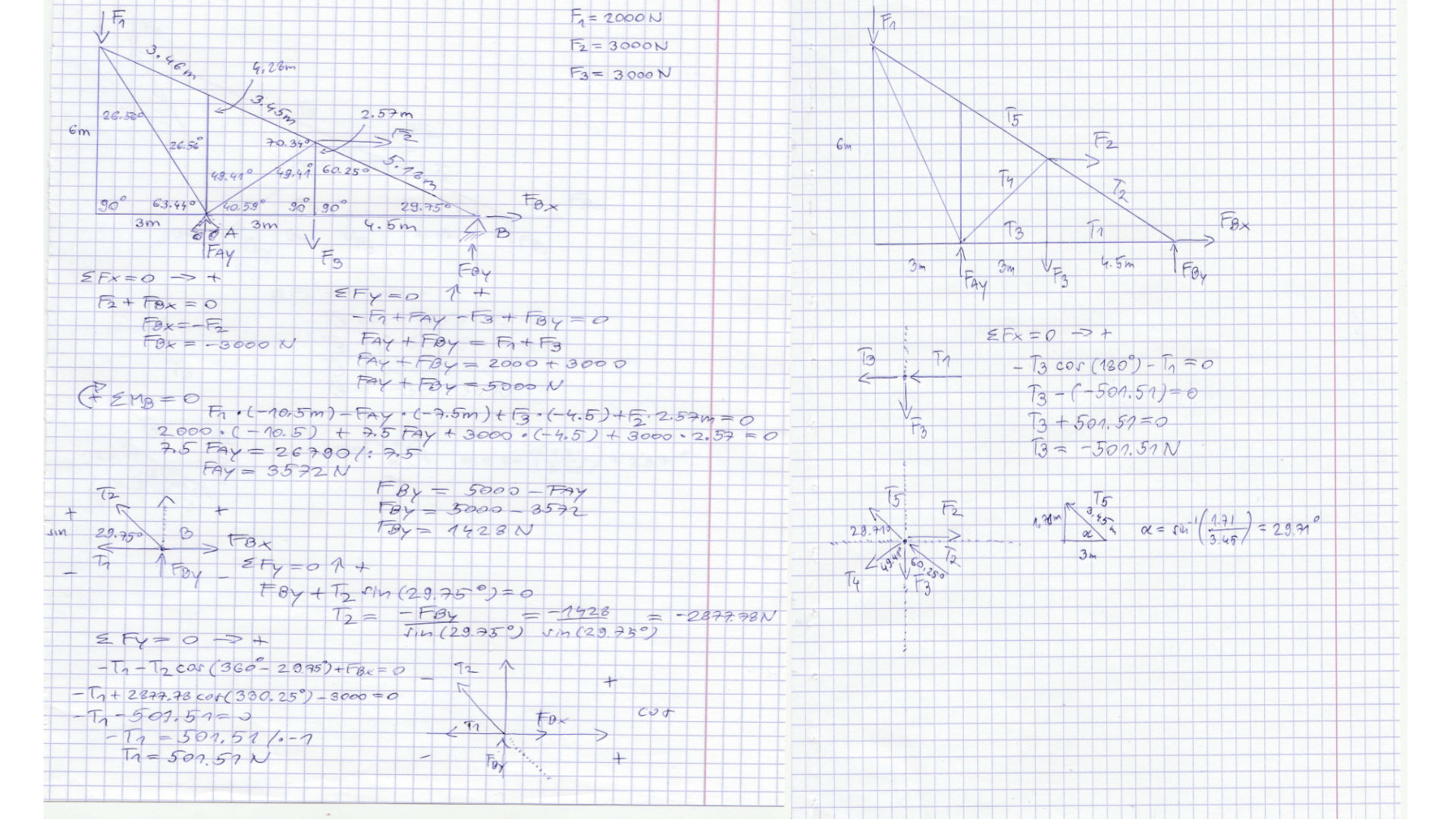 Yes, it's a determinate structure and you can solve for T4 and T5 using statics.

One approach is to use Method of Joints to progressively solve for the member forces, and it looks like this is the approach you've chosen. With two equations of equilibrium ($\sum F_x = 0$, $\sum F_y = 0$) we can solve for two unknown member forces at any node. From your calculations, this is what you've arrived at for the node where $F_2$ is applied (Node C, below). Everything is known except T4 and T5. Sometimes it is necessary to use a system of equations to achieve a solution, and that is the case here.

Below is a sketch of the truss with named nodes for ease of reference. I kept A and B as you had designated. Lengths of the angled members are noted in parentheses. 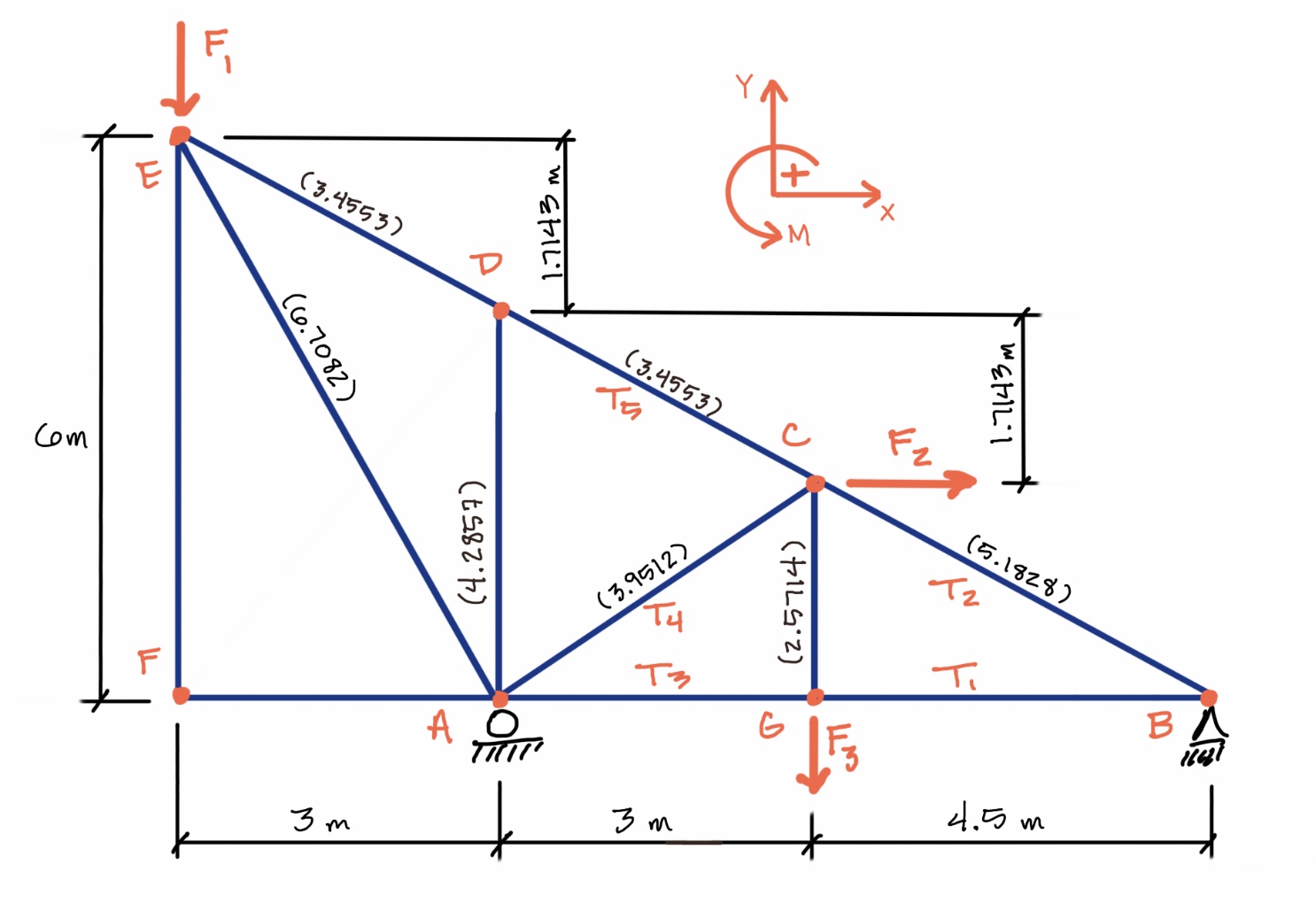 The steps followed in your calculations are appropriate for the Method of Joints: 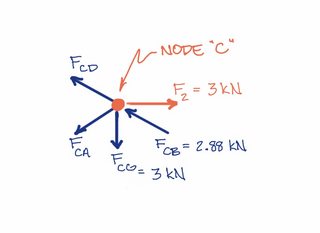 We use the known geometry to break each member force into x and y components, and then solve our two equations of equilibrium, $\sum F_x = 0$, $\sum F_y = 0$. Both equations will have $F_{CD}$ and $F_{CA}$ as unknowns. Solve simultaneously and, voila.

Side note: I find it convenient to use the triangle geometry of each member (i.e. the member is the hypotenuse of a right triangle) along with SOH-CAH-TOA to solve for the X and Y components of any member force. It's often simpler than dealing with the angles themselves. As an example, the vertical component of the force in Member AC can be calculated as $F_{AC} \frac{2.57}{3.95}$.

Another option is to make a vertical section cut through T5, T4, and T3 and use Method of Sections to solve for those element forces. For example, take the portion of the structure from the section cut to the left. We can sum moments about Support A to determine T5 ($F_{DC}$), because T4 and T3 will produce no moment about A. Sum of the forces in X and Y directions get you the rest of the way. 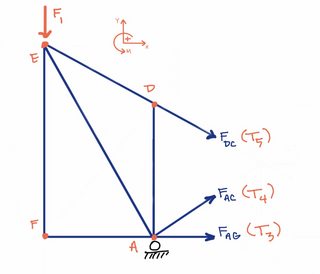 Solving the Remainder of the Truss

Should you want or need to solve for all the member forces, you can continue with Method of Joints. By inspection we can say the only way equilibrium can be satisfied at Node F is for the forces in both members to be zero. Similarly, with no external force applied at Node D, we know that $F_{DC} = F_{DE}$ and thus $F_{DA} = 0$.

10
How to deal with a point force acting right on the hinge of a beam?
3
Truss problem with multiple unknowns
1
Draw the FBD of the entire frame, assuming that friction and the weights of the members are negligible. How many unknowns appear on this FBD?
1
Structural Analysis Conundrum
1
I'm taking statics, and I'm stuck on this truss problem, how do do I solve this?
2
Determining Support Reactions
0
Statical equilibrium in 2D
0
I can't even see how can i solve this truss question