Is it possible to increase the heat output of a gas stove by connecting two gas supply canisters to it at the same time, and is it safe to do so? 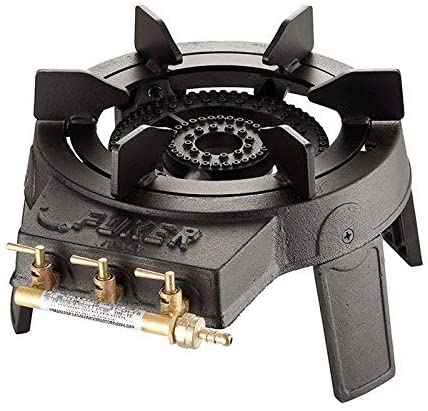 It is fed by a low-pressure gas supply in the form of a camping cartridge or via an LPG cylinder connected to a low-pressure regulator (around 30mbar) like this one: 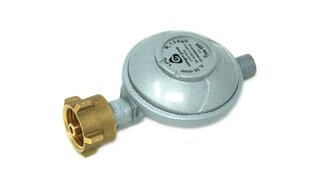 My question is: is it possible to increase the heat output of the burner by connecting two low-pressure supplies in parallel via a T-piece like this one? 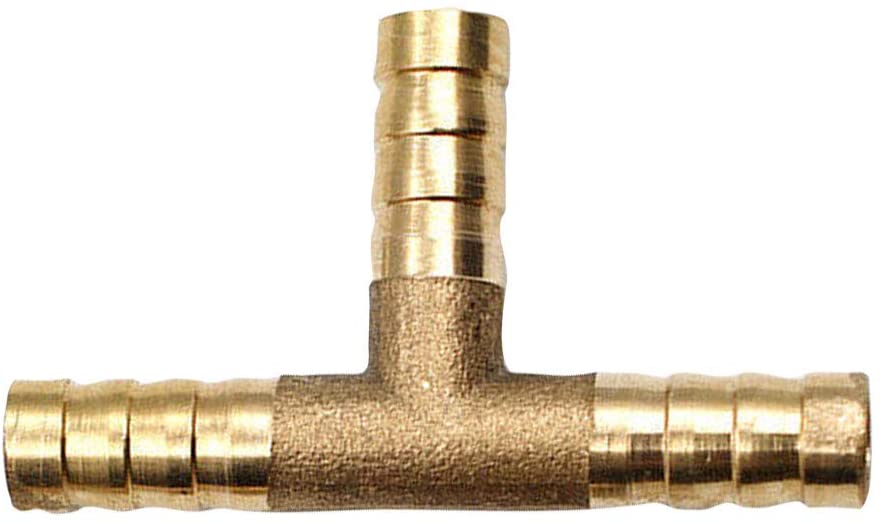 Would this actually result in double the gas flow/double the heat output, or would the stove itself impose some limitation on the maximum pressure of gas able to flow through it (excluding the obvious extreme cases of catastrophically high pressure where the stove or pipes might crack)?

How dangerous is it? Obviously I assume it's not a recommended procedure and it probably has safety considerations, but for example would doubling a low-pressure supply from 30mbar to 60mbar pose a serious risk, or are appliances in general built to withstand far higher pressures than this? I know standard gas hoses, for example, can withstand pressures of 20 bar (100x higher than low pressure canisters).

Is there a way of determining whether an appliance will be able to handle higher flow?

I've seen this done on cheap/flimsy camping stoves so I assume it's not a catastrophic risk especially with better-made burners.

is it possible to increase the heat output of the burner by connecting two low-pressure supplies in parallel via a T-piece like this one?

The best method for increasing gas flowrate is to increase the low pressure regulator setpoint. You can use equations such as this one to estimate flowrates through the different hoses although parallel flow means you'll have to solve for pressure at the tee intersection iteratively. Or try and make flow paths from each tank symmetrical.

Small threaded fittings often are rated for high pressures well above 10 bar due to scaling laws but you should check, wear eye protection, keep electronics away from your work area, and have a second person nearby with a fire extinguisher in case an uncontrolled fire does occur.

Other issues to be aware of regarding the burner design incide:

Here is a set of presentation slides with vocabulary that may be useful for your own research. Beware that it's possible to lose ignition due to insufficient mixing of enough air with the fuel. This means you'll probably have to modify stove fittings that affect this mixing process.

No, connecting two tanks together will not double the flow.

The regulators fitted to tanks limit the pressure and flow rate so all you do is double the amount of gas the burner has available ie doubles the time of use.

Do NOT interfere with the regulators.

There are automatic change over systems that have both tanks connected and it switches over when one is empty.

It wouldn't matter if you had ten cylinders all feeding the regulator, it could still only deliver that 30 millibars to the stove.

The only way to get more gas, therefore more heat would be to chamge the regulator. There are plenty on the market - 3 Bars is common. but don't do it!

The stove has been designed to run happily on those 30 millibars - components and joints will comfortably cope with that (very low) pressure. Much more, and it gets very dangerous - from an exploding into bits point of view from the pressure, let alone exploding in flames!

There is a mathematical formula called "The Hanson Theorum" basically it's the calculating the area of a circle, very accurate without the use of Pi.

If your gas jet is say $0.3mm$ we can create a higher gas flow, by boring that jet out to a slightly larger size with either a specialist drill size or some fine guitar wire... This will increase the gas flow, but at the same pressure. The regulator, should be able to cope with a $20 - 30\%$ greater flow.

OK you can drill them out - with a special drill or you can scrap them out with a piece of 0.009" or $0.23mm$ steel guitar wire... with a diagonally cut end, and a small drilling machine etc.. and just scrape away - you will get the technique... or you can hammed the wire into a square or rectangular shape....

Since you really are ONLY reboring it by a hair or two's increase in diameter.... it's not much and then you can see if your stove works well. Try to make the issue of small shavings in terms of rejetting the stove, rather than way too big.

If you go too big first go, your regulator may not flow that amount of gas AND OR your you may need to enlargen the air mixing stage, to get a hot clean flame, instead of a sooty yellow flame...

Yellow flames also produce Carbon Monoxide which is lethal in significant amounts in confined spaces.... and people under some conditions - like it's freezing cold, they are in a snow storm and the only place to cook is inside the little tent...

My little butane can single burner portable camping stove - on cold days like 10C, the burning rate which is based upon the boiling rate of the gas, which slows down as the evaporating gas, chills the liquid gas, so it cools and boils off at an incrediby slow rate, which means cooking a big meal in a pot takes 10 x as long as cooking on a 35C day.... So I need to fiddle with the jet a little to increase the rate of gas flow and not fiddle around much to make the stove improvements into a major engineering project, rather than a simple improvement.

Not the answer you're looking for? Browse other questions tagged gas welding compressed-gases brazing or ask your own question.

1
How can I measure the flow rate of CO2 gas from two different canisters?