Is it linear? If yes, I can make up the formula from all these tables.

I need a simplified case, like a single bare copper cylindrical (round) wire without insulation, in the air with 20-25 Celcius room temperature, etc.

It does not matter for me if the formula will be depending on wire diameter or wire area. I can change it if needed. 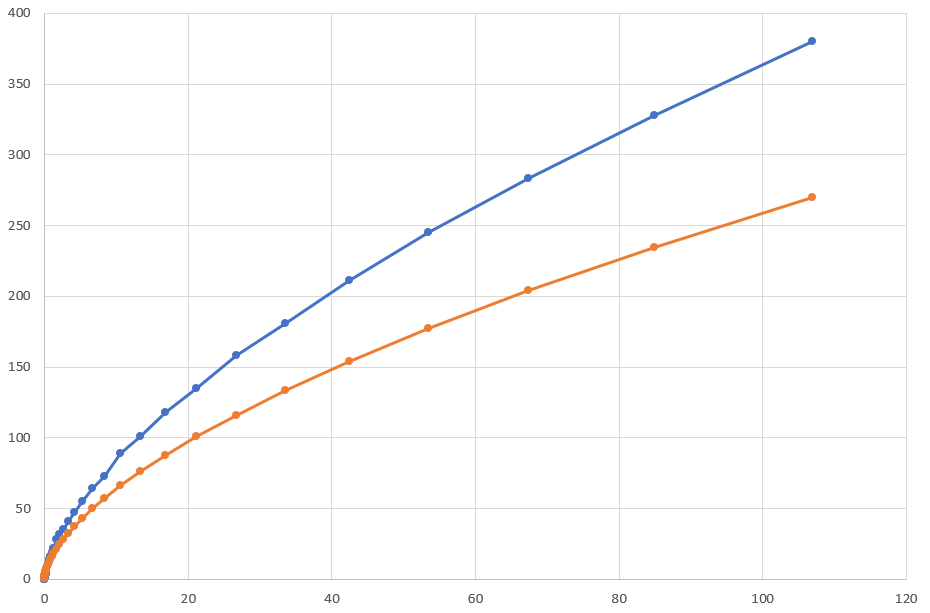 The horizontal axis is wire cross-section (A) in $mm^2$ and vertical axis is current in Amperes. Orange is a calculated graph. Blue is from one of the tables from the internet, here for example https://www.powerstream.com/Wire_Size.htm.

Looks like using these tables is the only way :( I will try to get an equation from the table with the assumptions that true equations should be

I will try to find y and x and post it here if I will be successful.

There are tables by various standards authorities which give current ratings for various wire gauges based on their insulation, bundling, free-air, conduit, etc. If you find one of those and plot the data you can generate your own best-fit curve. You might be able to get it down to a quadratic equation for a certain range of wire sizes.

For whatever reason standards bodies seem to prefer to give a tabulated list of values without giving any rationale to how those figures were obtained.

I once tried to do some first-principles reasoning on this.

We also know that the cross-sectional area of a cylinder is proportional to it's diameter squared.

And that the resistance of a conductor is inversely proportional to it's cross-sectional area.

And finally the equation for power in terms of current and resistance.

Now lets do some substitution and simplify so we get I in terms of D or A.

So how does this reasoning compare to actual tabulated figures in standards? not very well. It seems to overestimate the growth of current carrying capacity with diameter. My best guess is that the assumption that safe power dissipation was proportional to diameter was off.

Nevertheless this sort of reasoning suggests if a curve is to be found then it is likely of the form of a power law. When I brought this up in discussion on a forum another user ran a power law curve fit on some figures from BS7671* and found that

was a pretty close fit.

* Specifically the figures for twin and earth cable clipped directly to the surface of a wall.

Not the answer you're looking for? Browse other questions tagged electrical-engineering electrical current wire or ask your own question.

3
What materials or techniques can I use to reduce this electrical effect when building spotwelding tables?
23
Why doesn't a lightning strike destroy the lightning rod?
1
Strange simulink error. Professor & TA don't know. Any Ideas?
14
What is it about the cabin electrical supply on cruise ships that makes surge protectors dangerous?
0
Safely Measuring Voltage from Solar Panels in an Experimental Research Field
1
How to calculate power line loss with ohm's law and power equation?