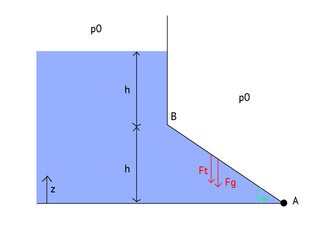 $\rho, p_o, \alpha, F_g, h, b$ are given. $F_T$ is wanted. There is a plate that can rotate around $A$. The plate measures b perpendicularly to the screen surface.

I neglect $p_0$ since it it's the same pressure on both sides of the plate.

This is the pressure force that works on the plate. To calculate its torque it has to be multiplied with its lever $l_a$.

I'm very unsure with how I substituted and inserted. I would appreciate someone to review if I did it correctly and maybe elaborate on what I got wrong if possible.

It looks like, from your math, you attempt to find the total normal force due to the pressure on the incline $F_p$, and then try to find a distance $l_a$ from point A such that if $F_p$ was applied there the torque would be equivalent to the torque caused by the pressure.

I'm not sure what you would use $l_a$ for, but if you're trying to equlibrate torques, it's easier to just calculate the torque due to the pressure (which you do in order to find $l_a$ anyway)

So I'm going to start from your calculations and note the errors in bold.

The actual torque is:

Where $\vec{n}$ is the vector normal to the surface, and $\vec{l}$ is the vector to the integrating point from axis A. As these vectors will always be perpendicular we can simplify using $l$ as the distance to point A.

At this point I'd integrate over y to get:

But we can delay that as you did.

So while your substitutions weren't valid in some intermediate states the final torque was correct.

Not the answer you're looking for? Browse other questions tagged mechanical-engineering fluid-mechanics or ask your own question.

3
Calculating the buoyant force of a rising bubble
7
Force in a crank system
2
Why use different specific heat capacities in the energy equations for incompressible and compressible fluid flow?
0
Pressure distribution on an inclined plate
2
Thermal Conductivity of a Layered Composite
0
Hydrostatic force on inclined immersed surface