How do center of gravity varies in submarine between surface and submerged?

I'm interesting in static* roll stability of submarines. I'm always tempted to compare submerged submarine to blimps and other bigger airships. For airships, roll stability is assured by a pendulum effect, the heavier components being located low into the structure **. I have no idea of how the masses are spread inside a submarine, but I imagine they are located such that the center of gravity is as low as possible to improve stability.

How does the location of the center of gravity change when filling the ballast?

The consequences of this variation on roll stability is out of the scope of this question as the geometry of the immersed part of the hull also change.

* i.e. when the submarine is not moving
** cutaway found on this website give a good overview of where payload was located.

From the picture that I found from this book, the answer seems to be yes. 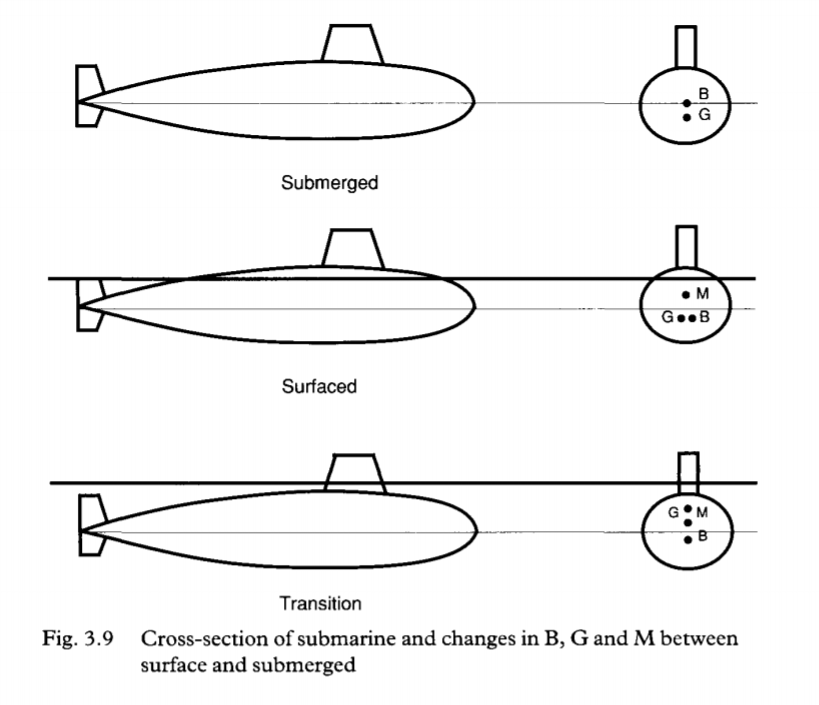 There are two very important constraints on the centers of mass and buoyancy which a submersible vessel must obey:

To understand more about the different submersion methods of a submarine, check this link.

Basically, there are two ways to submerge a boat: dynamic diving and staticdiving. Many model submarines use the dynamic method while static diving is used by all military submarines. Dynamic diving boats are submarines that inherently float that is, they always have a positive buoyancy. This type of boat is made to dive by using the speed of the boat in combination with the dive planes to force the boat under water. This is very similar to the way airplanes fly. Static diving submarines dive by changing the buoyancy of the boat itself by letting water into ballast tanks. The buoyancy is thereby changed from positive to negative and the boats starts sinking. These boats do not require speed to dive hence this method is called static diving.

Modern military submarines dive use a combination of dynamic and static diving. The boat submerges by filling the main ballast tanks with water. After that, the buoyancy is accurately adjusted with the trim tanks. Once underwater, the depth of the boat is controlled with the hydroplanes.

And this link has great details on the different ballast tanks used in a submarine. 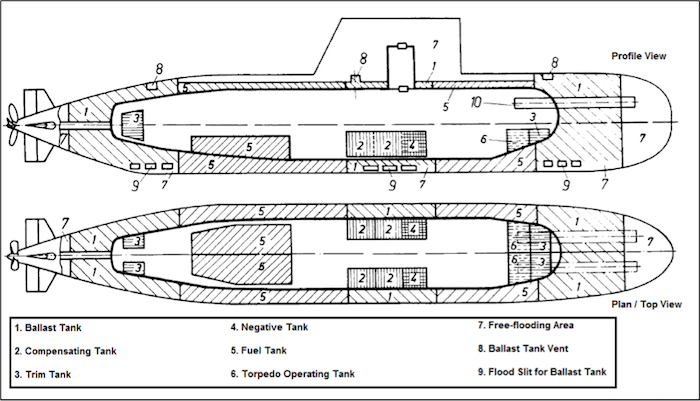 And to understand more about the stability of a submarine and the working of a ballast tank, check out this link.

Main Ballast Tanks on US nuclear submarines are basically tori (donuts) surrounding the pressure hull. If you could get your hands on actual drawings, I suppose you could calculate the small difference in center of buoyancy, but in practice there is no change. When submerged, main ballast tanks are completely full of water. The act of submerging is accomplished by venting the main ballast tanks of air until only water remains.

You are correct that the center of buoyancy on a submarine is above the center of gravity. (If it weren't, the sub would capsize until it were.) What this means is that a submarine is always self righting- there is no limit of positive stability. But it also means that the righting moment is low. Submarines roll terribly in almost any sea state, either on the surface or even towards the surface when submerged. Square-bottom ships are aided in righting moment by the center of buoyancy moving laterally towards a roll, which makes the ship more stable. Submarines do not have this. Seasickness is a real problem on or near the surface.

Not the answer you're looking for? Browse other questions tagged submarines or ask your own question.