I've seen videos of Theo Jansen's linkage driven walkers, and they all walk really slowly. Is it because they want to showcase leg movement or these things actually can't move fast? 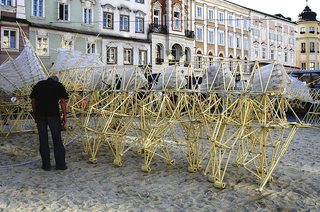 " ... it is logical to expect them to typically act in the ethereal beautiful whimsical way that they do. ..."

Observers "answer" - no claims for certain correctness made, but 'seems logical':

The video cited shows much faster action than many of his earlier creations. Without going back and looking at earlier designs the impression given is that he has increased active wind collection area to increase available power and energy levels and that operation speed is approaching "reasonably fast" for the construction methods and materials used.

All that said, I imagine that 'slow' better suits his wishes, but, the operation is essentially series asynchronous ripple-through switching, with lots of potential for slop and hysteresis, leading to non trivial minimum forces being needed before a given joint or lever will perform its action or reverse a prior action.
With force levels varying above and below and never vastly more than the magnitude that is necessary to 'make something happen' it is logical to expect them to typically act in the ethereal beautiful whimsical way that they do.

However, if speed of action was an aim then it would be possible to develop wind powered devices that specifically target the points above that lead to slow action. While it would be immensely hard to achieve consistent repetition rates of say sub-second order, it should be possible to apply available energy in a manner which significantly increases speed of operation.

These devices are essentially "wind mill driven" withe the aerodynamic input surfaces distributed across the structure. By increasing drive surfaces to obtain more power and energy input (related but not identical) and directing power so that force & energy:losses on a given motion member were high, much 'crisper', if not exactly lightning fast, action would be achievable.
But, then, where's the fun? :-)

Not the answer you're looking for? Browse other questions tagged mechanical-engineering linkage or ask your own question.

5
How to transfer rotational energy into lateral energy only when rotating one way?
3
Friction clutch and the force required
2
What (if any) are the engineering limitations for producing "simulation" exoskeletons
0
How can I calculate headphone driver excursion?
1
Do crank-sliders require some minimum amount of momentum to work in linear-to-rotary convertions?
1
What Goes Into Making a Variable Field Magnetic Motor?
0
How can a mechanical pocket watch wind itself from movement, and does it really get damaged if wound "too much"?
0
How can (many) mechanical watches keep track of the current day of the month when these vary so much over months and years?